Will Canadians heed the canary? 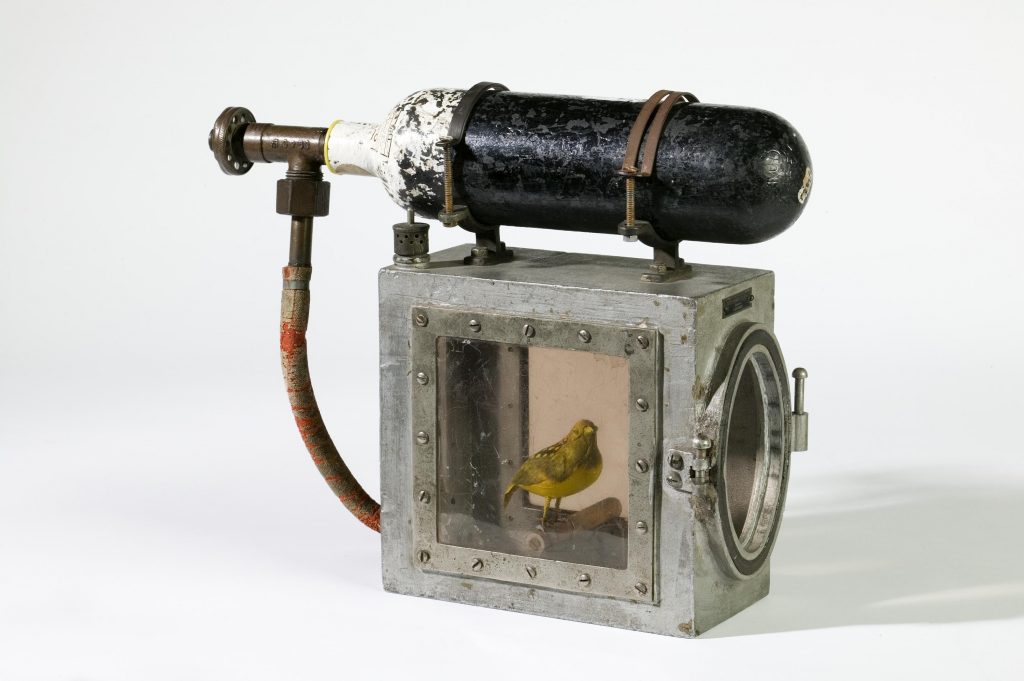 Many Canadians know the phrase “canary in the coal mine”. For a century, caged canaries were taken into coal mines to alert miners when the levels of poisonous gases were too high. Because birds are more sensitive to harmful gases than humans, they provided a critical early warning sign of danger.

When the canary passed out, it was time for the miners to get out―before they fell fatally ill or were killed in an explosion.

A lesser-known fact is that the canaries were sometimes carried in special cages with an oxygen tank attached.

When the canary passed out, the cage would be sealed, and oxygen would flow in to revive the canary.

Recent events in Canadian politics are creating a toxic atmosphere for our own democracy. All of us could soon be in desperate need of oxygen.

The election of Pierre Poilievre as leader of the Conservative Party, riding a wave of anger, has sparked the latest round of columnists sounding the alarm about the precarious state of Canada’s democratic health.

After a divisive snap election last year (seen by many as little more than an unsuccessful power grab), the disruption of the “freedom convoy”, and a dismal 42% turnout in Ontario’s election, it’s clear: something is seriously wrong.

No single event, campaign or leader is to blame. Our democratic decline has been a long, slow process, but the problems have really taken root in the last two years.

With the advent of social media and the impacts of growing inequality, Canada is not immune to forces that are reshaping democracy in the rest of the world. Thankfully, we have much more sophisticated tools to alert us to signs of danger than the miners of long ago.

The warning signs of trouble in Canada are stark:

EKOS pollster Frank Graves’ research demonstrated in 2020 that authoritarian populism is on the rise in Canada.

The Economist’s 2022 Democracy Index report warned that Canada is starting to suffer from the political problems as its US neighbour, including decreasing trust in political institutions and growing support for non-democratic alternatives

A 2020 Cambridge University report quoted in the Toronto Star pointed to some causes of Canada’s democratic decline. They listed “Canada’s “winner-take-all” electoral system”, “economic inequality” and “regional grievances” (the latter two being exacerbated by our winner-take-all electoral system).

While some MPs recklessly make light of the issue and suggest that Canadians get the popcorn ready and settle in to watch an ever more acrimonious fight, experts such as Peter MacLeod are calling for innovative ways to reduce partisan vitriol and tackle the democratic deficit.

Local citizens’ assemblies are one useful tool. Bringing citizens with diverse backgrounds together to tackle tough issues is a proven method for informed citizen engagement and evidence-based recommendations.

Citizens’ assemblies are becoming part of the democratic fabric in many places around the world. The city of Paris has even installed a permanent Assembly that will bring laws created by the citizens directly to a vote of the city council.

But small-scale, local citizens’ assemblies are an incremental way to build democratic resilience, not an instant cure for all that ails us as a country. Meanwhile, the forces ravaging politics are now coming at us hot and fast. We need other remedies as well, and we need them now.

When it comes to electoral reform, politicians have shown time and again that, left entirely to their own devices, they will not lead on reforming the system that elected them. Their conflict of interest is obvious.

The federal electoral reform process ended in 2017 with the Liberals recommending that  “the Government further undertake a period of comprehensive and effective citizen engagement”.

A National Citizens’ Assembly on Electoral Reform and Democratic Renewal would revive a promise that was important to many and provide leadership for the transformational change we need.

Given the mandate and resources to learn from experts, reach out to Canadians, and find solutions, a National Citizens’ Assembly could be a powerful tool to tackle the challenges staring us in the face. Instead of being dragged along by the rise of destructive problems in many parts of the world, Canada could become a leader in solving our democratic problems at home.

A 2020 Leger poll showed that 80% of Canadians―voters of all partisan stripes―would back a National Citizens’ Assembly on Electoral Reform.

Acting now to strengthen democracy can prevent irreversible damage down the road. Let’s revive our little canary, before it’s too late. 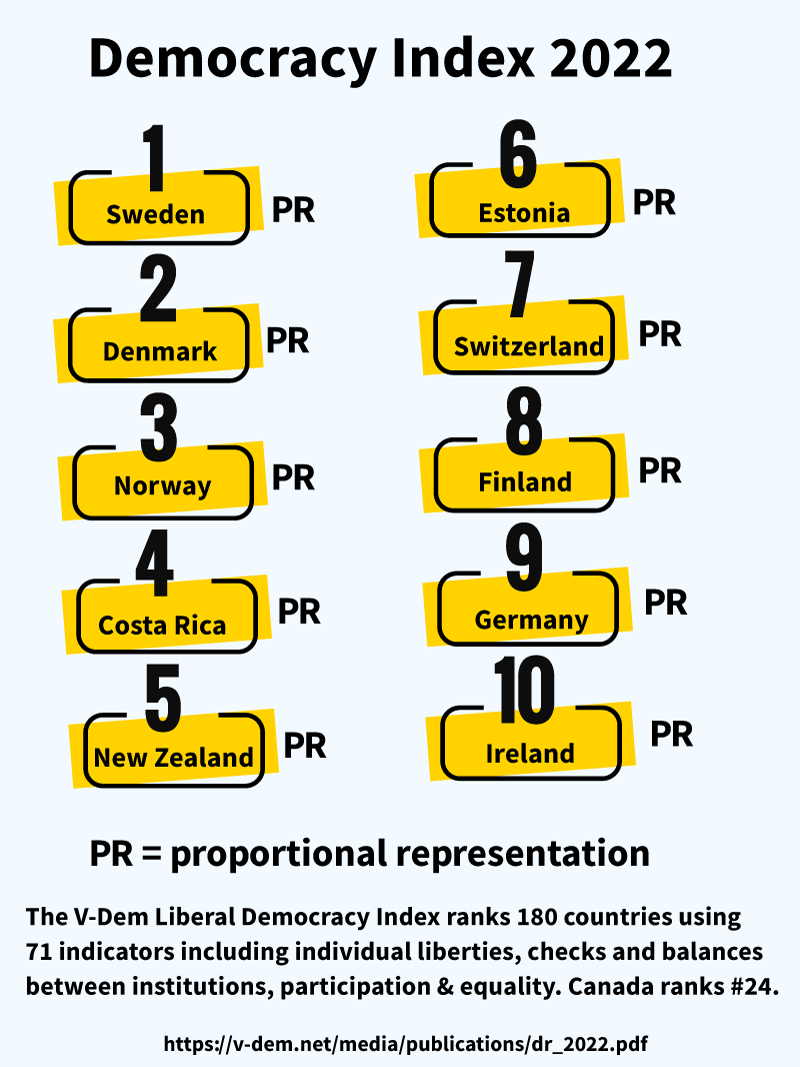 A website to learn the basics about how citizens’ assemblies work with research, videos and some examples from around the world.

“Polarization”, the “us vs them” sentiment in politics, where people feel hostile towards those on the “other” side, is a growing concern. PR may help reduce these feelings of partisan hostility. Horne, Adams and Gidron (2022) looked at 19 western democracies between 1996-2017, analyzing  “thermometer ratings” of 148 distinct political parties among 76,187 respondents. They found that people in countries with PR felt warmer towards any parties that had been in a coalition government with their preferred party anytime over the previous 15 years. This warmer feeling remained even if the parties that had been in a coalition together were ideologically far apart.

Research has found that voters in countries with winner-take-all voting systems perceive their country’s political parties to be further not only from one another, but also from themselves. In other words, winner-take-all systems are more polarized. Rodden (2018) concludes: “Proportional representation brings a powerful advantage: it can allow the political system to absorb the rise of new issue dimensions, from environmentalism to women’s rights to nativism, without the issue-bundling that facilitates all-encompassing American-style polarization.”

Nemoto and Pinto (2019) studied the nature of political discourse in the New Zealand Parliament before and after proportional representation was adopted in 1996. Analyzing 821,442 parliamentary speeches by MPs from 1987 to 2016, they found a marked decrease in anger and hostility in MP’s speeches overall after 1996, most significantly in the tone of ruling party MPs towards smaller parties who might one day be coalition partners with them.

Research: Proportional representation protects climate policy from the influence of the far right

Lockwood and Lockwood (2022) found that countries with proportional representation (PR) voting systems are better protected against the threat of having climate policy reversed by right wing populists than countries outside the EU with winner-take-all systems such as Canada, the USA and Australia. In countries with proportional representation, far-right parties had no significant effect on climate policy.

The Economist’s latest Democracy Index report and the disruption caused by the Freedom Convoy warns of Canada’s slide into US-style political problems.