Proportional representation matters to our health 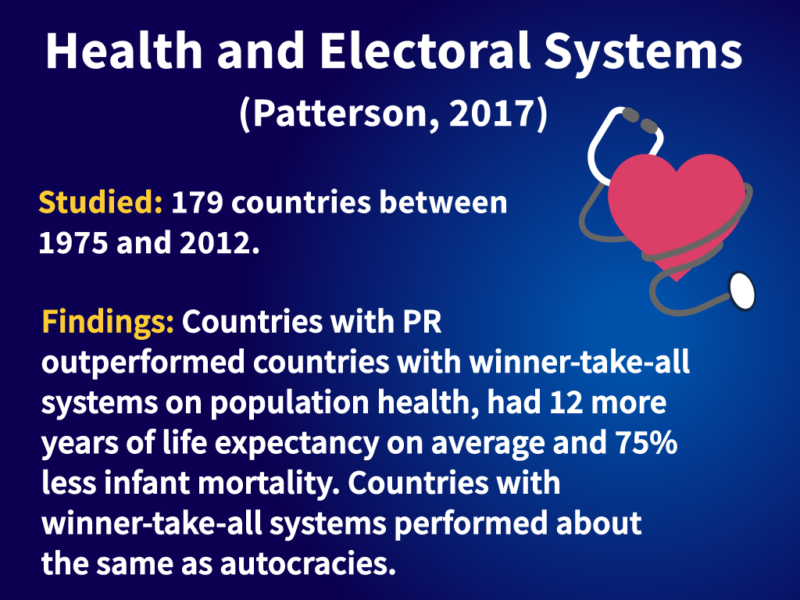 Patterson (2017) studied the experience of 179 countries with different types of democratic or autocratic regimes between 1975 and 2012 and found that countries with proportional systems most reliably outperformed other countries with regard to population health. Compared to “closed autocracies” at the other end of the spectrum, countries with PR had up to 12 more years of life expectancy on average, 75% less infant mortality, and lower mortality rates for most other age groups. In contrast, countries with winner-take-all systems were not better than closed autocracies in terms of health improvements over time. The authors conclude that democracies are not equally effective at holding leaders accountable and that broad representation of diverse interests appears to be what matters most to ensure positive health outcomes. 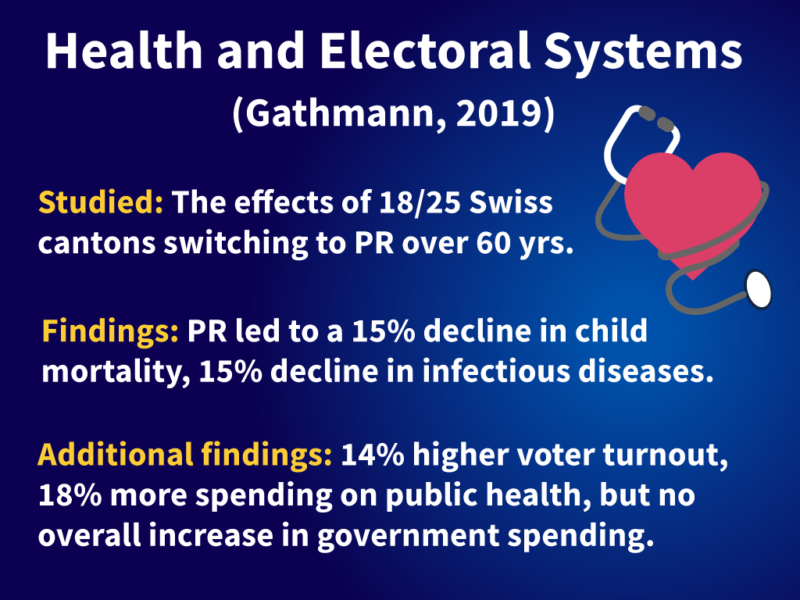 Christina Gathmann (2019) exploits a unique time-series database from Switzerland, where, between 1890 and 1950, eighteen of the country’s twenty-five cantons switched to proportional representation in a staggered way. She was thus able to exploit a data set of multiple before and after scenarios against which to assess the impact of changing over from a plurality to a proportional system.

She documents a “sizable shift in political participation and representation when cantons switched from a majoritarian to a proportional system… (that) gave the previously underrepresented working class a greater weight in the political process.” This led to changes in public spending, most significantly in the education sector, with ultimate benefits in terms of population health. She estimates that the electoral reform contributed between 11 and 17 percent to the observed decline in mortality during this period.

This is a sizable contribution considering the role of other factors, including major advances in sanitation and medical practices during this period. As she points out, “such sizable mortality reductions demonstrate that electoral rules and hence, the form of democratic representation have powerful consequences for population well-being.” 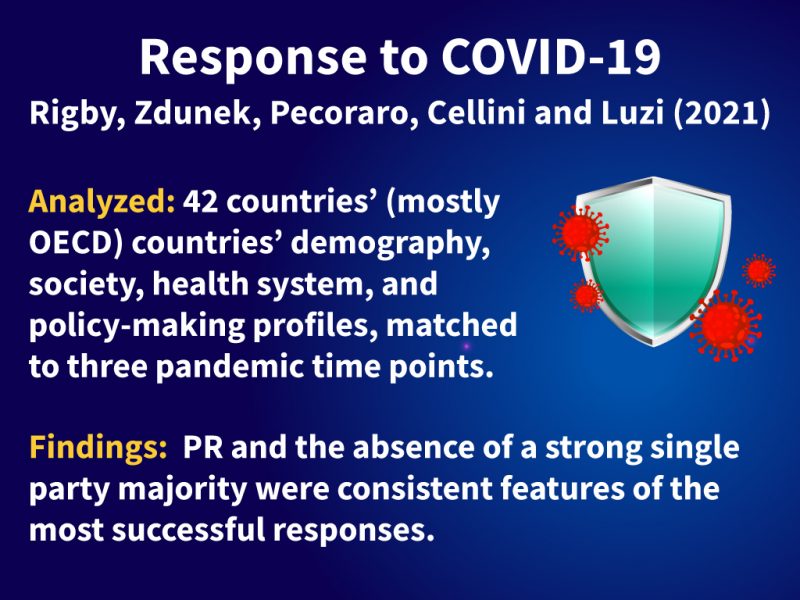 Conclusion: Strength of therapeutic health system, and indeed of preventive health services, surprisingly had little correlation with impact of the pandemic in the first nine months measured in death- or case-rates. However, specific political system features, including proportional representation electoral systems, and absence of a strong single party majority, were consistent features of the most successful national responses, as was being of a small or moderate population size, and with tertiary education facilitated. It can be interpreted that the way a country was lead, and whether leadership sought evidence and shared the reasoning behind resultant policies, had notable effects. This has significant implications within health system development and in promoting the population’s health.

From the article, related to proportional representation (emphasis ours):

“Turning to electoral systems, the six countries keeping their death rate growth below 50% all had proportional presentation electoral systems, with the top two having customised variants. The top three in the Resilience Index are similar. By contrast, two of the three countries with First Past the Post electoral systems fare particularly badly. Coalition governments are often seen as weak, but the top five performers in each analysis had coalitions, and twelve of the top fourteen (85.7%).”

“The strongest, and least anticipated, findings come from the political characteristics. The clear linkage between resisting the initial wave of the pandemic or successful recovery from it are strongly associated with proportionate representation, and with the likelihood of having a coalition government and of a female prime minister.“

“It can be hypothesised that coalition governments, by being more fragile and needing to keep political partners continuously convinced and thus committed, also have to be persuasive, and our findings would support that. Conversely, countries with first past the post elections can result in governments representing only a minority of the population, and single party majority governments can ride out criticism with comparative impunity over several years until the next election.

“And in a wider context, these findings link in with an emergent debate in countries and primarily in social media about the limitations of some voting systems and government selection methods, particularly the first past the post system which can lead to governments gaining a strong majority based on a minority of voters. Not hitherto considered a determinant of health, representation of (and leadership of) the people may now emerge as important in effective pandemic leadership.”

Majority governments, seeming strong but being more impervious to feedback, appear less effective in pandemic management than open and responsive ones. Greater strength is shown by seeking, listening, making evidence-based decisions, and explaining the chosen way forward, and this yields better results. And to enable this leadership style to prevail, a proportionally represented population, empowered in particular by tertiary education opportunity which itself cultivates critical analysis as a social skill, seems important.” 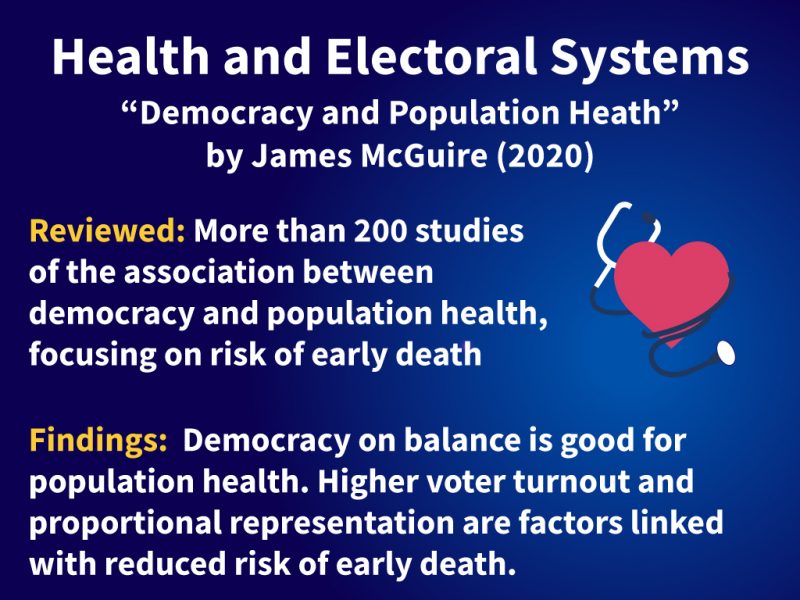 From the interview with author James McGuire, author of Democracy and Population Health (2020), Cambridge University Press.

“For my forthcoming book, Democracy and Population Health, I reviewed more than 200 quantitative studies of the association between the two phenomena. On balance, these studies find that democracy is usually, but not invariably, beneficial for population health.

Besides establishing that democracy on balance is good for population health, the studies I reviewed found that electoral contestation, although important as a determinant of population health, is not the only aspect of democracy that reduces the risk of early death. Long-term democratic experience appears to be important as well, as does decentralization, high voter turnout, proportional representation, and left-party strength.”