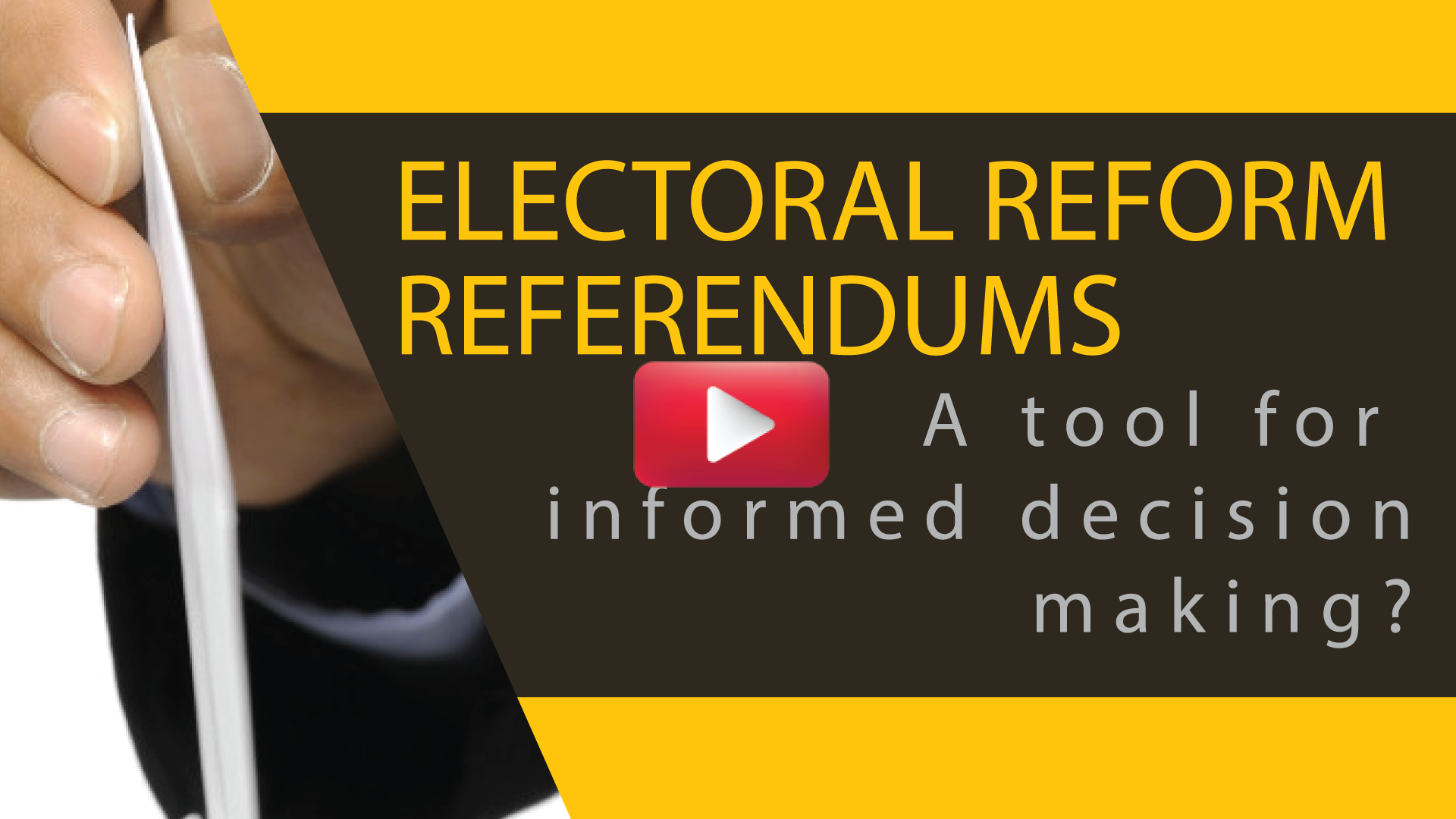 Looking for a deeper dive into the research into referendums? Find out what really drives the vote, and why Fair Vote Canada is calling for a National Citizens’ Assembly on Electoral Reform in this webinar (video above) with referendum and citizens’ assembly expert, Professor Lawrence Leduc.

(click here for an easy-to-print version of this document)

Referendums on Electoral Reform and the Search for a Better Way

Although it is important to hear from citizens when it comes to electoral reform, most other countries have made the transition without recourse to referendums. In Canada, we have had several referendums, and this has not been a happy experience.

Fair Vote Canada’s position is that there are better ways of consulting Canadians. Citizens Assemblies, increasingly used in Canada and in other countries, offer a more constructive and less divisive forum for grappling with complex issues such as electoral reform.

Contrary to what many people might think, referendums on electoral reform are not the norm internationally. Around the world, only two countries have ever brought in proportional representation by referendum: Switzerland in 1918 and New Zealand in 1992.

In Canada itself, there is a long history of change to our electoral system without referendums. This has included the expansion of the franchise to new groups, including women and indigenous peoples, major reforms to election financing and other important features of our electoral system, and major changes to the voting system itself in Manitoba, Alberta and BC.

There are good reasons for consulting with citizens before enacting electoral reform. Considering that the electoral system is the mechanism whereby citizens elect their representatives, it seems natural that leadership from citizens themselves should be critical to setting the rules.

However, referendums are only one way of consulting with citizens, and not necessarily the best for the purpose at hand. When the special parliamentary committee on electoral reform (ERRE) held its hearings in 2016, the subject of referendums was frequently discussed, and was a major point of contention around the table.

In the ERRE consultations, 67% of the 84 experts who pronounced themselves on referendums recommended against them on a subject as complex as electoral reform. Many cited the June 2016 Brexit referendum as a vivid example of how referendums can go wrong.

In their Supplementary Report, Liberal members pronounced themselves at length on the subject and opposition to referendums was a major reason cited by the Liberal government for rejecting the ERRE recommendations.

Considerable testimony referenced instances in which referendum campaigns demonstrated a significant bias towards the status quo. The “Yes” side to any referendum against the status quo must demonstrate why it is a preferable option to an established norm, while the “No” side can capitalize on anxiety, uncertainty and fear…  Given the uncertainties surrounding referendums, it is our view that alternative consultation methods should be examined as feasible options. Alternatively, the idea that further parliamentary review would be sufficient and beneficial was proposed by several witnesses, and remains an option.

When enquiring about alternative consultation methods to referendums, one needs to consider three criteria:

More common forms of public consultation such as elections, polls, public meetings or online consultations all face limitations according to one or more of these criteria.

Elections can provide a mandate for change by allowing voters to opt for parties and candidates who have promised electoral reform as they did federally in 2015, when 63% of voters supported the three parties promising electoral reform (the Liberals, the NDP and the Greens). In 2003, all parties in the Quebec provincial election supported electoral reform, following the work of the Estates-General that showed a high level of popular support for proportional representation. However, voting reform tends not to figure prominently in election campaigns — as an overarching issue, it tends to be overshadowed by the immediate issues of the day. Some politicians try to avoid discussion of the issue altogether.

Opinion polls allow us to take the pulse of citizens on matters of general principle. As such, opinion polls like that conducted by Angus Reid in Nov. 2019 are an excellent way to sound out what people are looking for in an electoral system, provided the questions are well designed. Citizens responding to such polls systematically express support for democratic values consistent with proportional representation. However, electoral reform is a complex subject and polls are a blunt instrument that do not allow for the education, dialogue and reflection that would be needed to properly address such subjects.

Public meetings and online consultations of the sort conducted by the ERRE tend to engage citizens with a particular interest in the issue. In 2016, the ERRE consultations were one of the most extensive public consultations in this country. Such consultations provide a good measure of what the most engaged part of the citizenry thinks about an issue that is important to them but may not be representative of the general population.

Referendums complement mechanisms such as the above by posing a specific, generally contentious question to all citizens for endorsement or rejection. They encourage citizens to become better informed and provide an opportunity for them to engage directly on major issues.

One of the key arguments against referendums is that they are biased towards the status quo. While it is normal and healthy for citizens to be cautious about endorsing change, it is all too easy for opponents of reform to sabotage referendums by generating unsubstantiated fear and confusion.

In referendum campaigns, the “no” side has a huge advantage, regardless of the legislation. This is true throughout the world, and you might ask why. It’s because with a “no” campaign, you’re running against change, and people don’t know what life is going to be like under that change. A typical no campaign is when you think about a worst-case scenario, and you make your whole campaign about that.

The advantage enjoyed by opponents to change that can be achieved by sowing fear and confusion is considerable. Professor Lupia adds,

In California where there’s a professional referendum industry, and people care about their win-loss records, most people will not touch a yes campaign unless it’s polling 70% or more a year in advance of election day. The reason is that people recognize that “no” campaigns are easier to run. Everybody believes that the yes support will fall over time, the mystery being whether it will be above or below 50% on election day. There are very few cases where support for yes actually goes up during a campaign.

Another major question about referendums on electoral reform is whether they are an appropriate process at all. No one would ever have advocated a referendum when it came to extending the franchise to women or to indigenous peoples because extending the franchise is a rights issue and the majority should not be allowed to deprive a minority of their rights. No one would have considered a referendum about whether to end slavery to be legitimate.

However, the problem with our first-past-the-post electoral system is precisely that it deprives some people of a meaningful and effective opportunity to elect a representative of their choice. A rights issue is not an appropriate one to put to a referendum.

When all is said and done, referendums come at the cost of further delaying reforms that have been recommended by multiple commissions and assemblies for decades in this country and cannot protect us from the status quo bias or the onslaught of misinformation and fear-mongering that can be expected from vested interests, including the mainstream media.

This is why out of the five parties currently represented in our national Parliament, three of them — the Liberals, the NDP and the Greens — have expressed serious concerns about referendums on electoral reform.

If there must be a referendum on electoral reform that makes any sense at all, it should be put forward and managed not by politicians but by an independent body of citizens with no vested interest in the outcome. It should include adequate funding for meaningful public education and be supported by appropriate truth in advertising regulations.

An approach worthy of emulating would be that of the Citizens’ Initiative Review process used in Oregon, which brings randomly selected panels of voters together to evaluate a referendum measure and give voters information they can trust. This would be a far better use of public funds than allocations of public funds in support of the Yes and No sides.

The challenges posed by referendums on electoral reform suggest the need for attention to more in-depth approaches that provide an opportunity for citizens to study an issue and to deliberate among themselves before coming to a conclusion.

Citizens’ assemblies are one such mechanism. They involve ordinary citizens selected according to a structured random sample who are tasked to study and deliberate on complex topics like electoral reform and reach a consensus in alignment with the interests of the general public. A citizens’ assembly would provide an opportunity for citizens to delve more deeply into the pros and cons of changing our electoral system and to report back with their findings and recommendations.

FVC envisions a citizens’ assembly of manageable size that would convene in person several times. In between, these delegates would communicate electronically with each other and be involved in public consultations and discussions in different parts of the country.

To maximize the legitimacy of a citizens’ assembly process, additional opportunities for public input should be a central part of the process. At a minimum, this would mean holding public consultations across the country and providing online opportunities for citizens who wish to be involved.

Our view is that a robust citizens’ process of this sort would eliminate any need for a referendum. FVC’s position is that a citizens’ assembly combined with other forms of deliberative public consultation would be a superior way to determine the wishes of the electorate compared to a referendum.