PR-STV is used nationally in Ireland, in the Australian Capital Territory and Tasmania, and in Scotland for local elections. PR-STV was used to elect provincial MLAs in Winnipeg, Calgary and Edmonton for 30 years. It is the original proportional representation system.

Read the STV part of our submission to the federal Electoral Reform Committee.

Instead of electing one just MP in each single member riding (first-past-the-post), voters elect a small team of MPs in a multi-member local district. This better reflects the political diversity that exists in every area.

The BC Citizens Assembly recommended local districts elect between two and seven members, depending on the geography of the area. See the bottom of this page for an example from Ireland of multi-member districts that elect several local MPs.

PR-STV is a candidate-centered system which allows voters to rank candidates based on what characteristics are most important to them. It also offers popular independents a chance to be elected. It is the system that gives voters the most nuanced say over who fills the seats.

Voting is simple. Rank candidates as few or as many candidates as you want in any order you like. You can rank across party lines.

Counting the ballots is more complex than first-past-the-post, because voters preferences are taken into account to ensure that the MPs elected to represent the local area reflect the preferences voters marked on their ballots.

There are many excellent videos on STV counting on our youtube channel in the systems playlist. To get the basic idea of how the ballots are counted, we recommend this short video.

Below is a map of recent election results in Ireland, which uses PR-STV. Each district elects several local MPs to reflect the diversity of political opinion in the area. This means that voters have more than one MP working on policy in the legislature (often MPs in government and in opposition) and advocating for the interests of each local area. 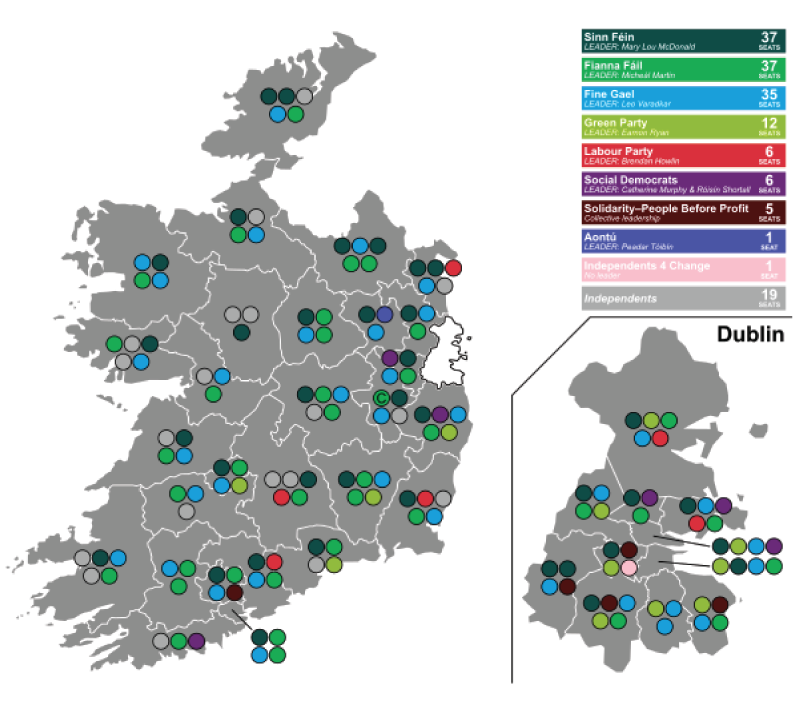