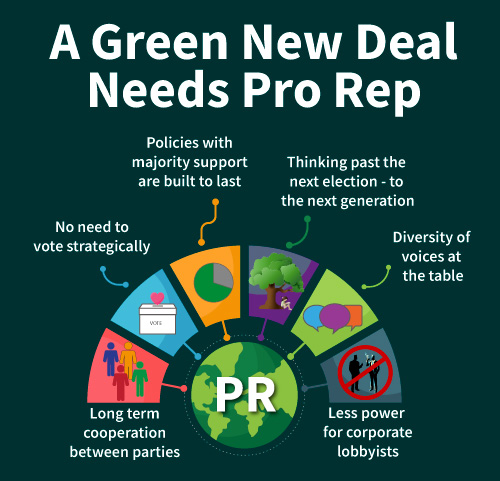 Tackling the climate crisis is going to require cooperation between parties and long term thinking.

Winner-take-all electoral systems such as first-past-the-post produce frequent “policy lurch” – where one government elected with less than half the votes reverses the policies of the previous government. Over time, we move back and forth, instead of forward.

Cyclic reversals of legislation, dismantling regulations and cancelling programs related to any policy area is economically wasteful. On climate policy, scientists have told us we have only 11 years to reduce emissions. We simply don’t have time for the policy lurches of first-past-the-post.

Proportional representation means that parties must work together to create policy – so every policy has the support of parties representing a real majority of voters. These policies are much more likely to last through changes of government. Lobbyists may not wield so much power in proportional systems, since they now need to convince multiple parties to agree to their objectives.

A look at the research 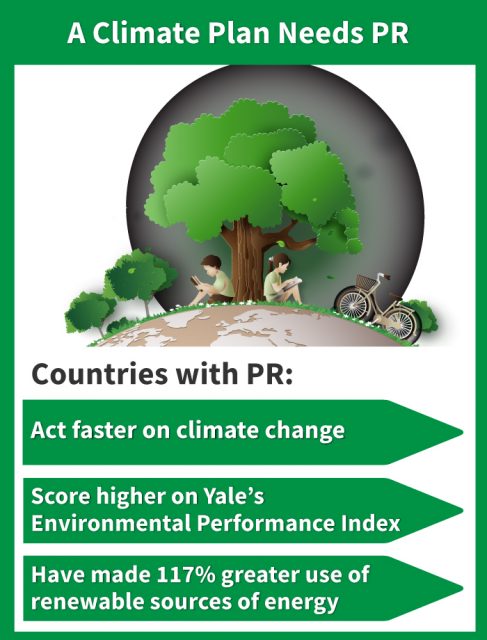 Countries with proportional systems tend to act more quickly and do more to protect the environment. These countries:

Cohen (2010) found that countries with proportional systems were faster to ratify the Kyoto protocol, and that their share of world total carbon emissions had declined.

Using data from the International Energy Agency, Orellana (2014), in his book “Electoral Systems and Governance: How Diversity Can Improve Policy Making”, found that between 1990 and 2007, when carbon emissions were rising everywhere, the statistically-predicted increase in emissions was significantly lower in countries with fully proportional systems: only 9.5%, compared to 45.5% for countries using winner-take-all systems. Orellana also found that citizens in countries with proportional representation were more supportive of environmental action, and more willing to pay the costs associated with environmental protection. He found the use of renewable energy to be approximately 117 percent higher in countries with fully proportional electoral systems.

Click here for FVC’s overview paper on the evidence for PR on a wide range of issues.