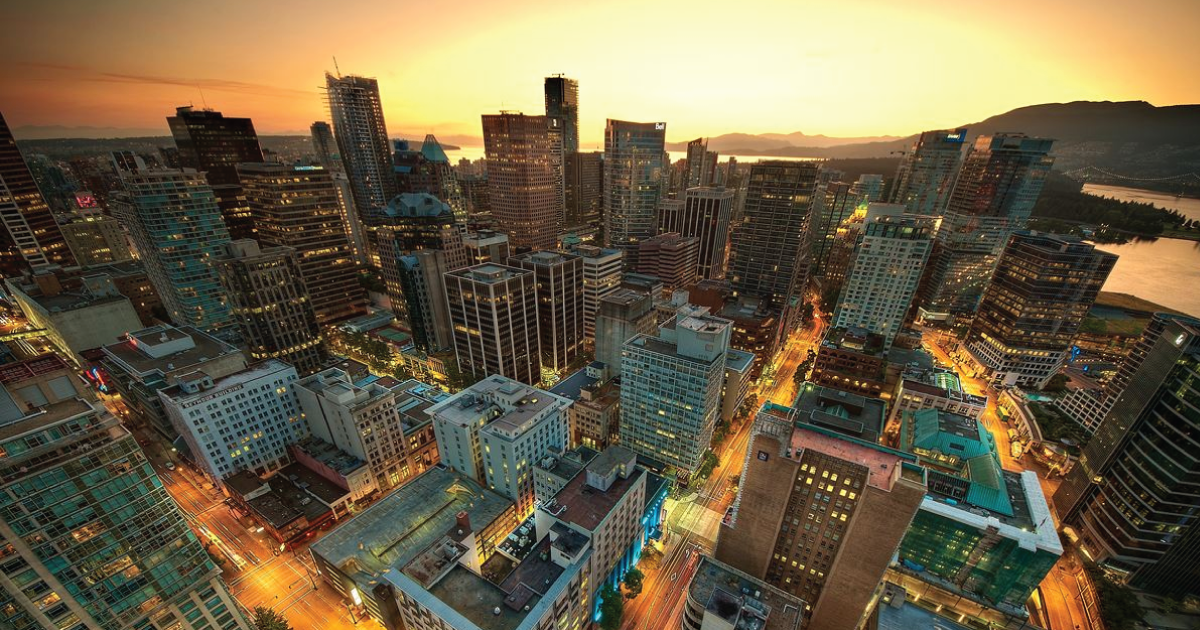 Many people don’t realize that proportional representation can be used municipally, to elect city councils. Here’s why and how.

Many people think proportional representation applies only when there are political parties. 30% of the vote for Party A should mean Party A gets 30% of the seats – you know the pie chart! This is the easiest way to visualize PR for federal and provincial elections.

While some cities in Canada have political parties at the local level (Vancouver, Montreal) most do not.

Proportional representation works just as well to make every vote count and represent diversity in municipal elections without political parties.

This is because proportional representation is a principle: That an elected body (such a city council or a legislature) should accurately reflect the diversity of the community. That every vote should count. The principle can be put into action in elections with and without parties.

The original proportional representation system – Single Transferable Vote (PR-STV) – was invented and in use before political parties even existed, when voters with values in common were not defined by party labels but still needed fair representation.

Representation of political and ideological diversity on local councils

Canadians tend to view municipal elections in cities without parties as refreshingly “non-partisan”. They look at their municipal representatives as ideally being independent local problem solvers.

While its true that in most cities there are no political parties, it’s also true that the candidates running for municipal councils are not ideology-free. Municipal politicians make important decisions where ideology and values become very important: about spending, housing, social welfare programs, land use and development, and more.

In other words, if voters in municipal ward A tended to vote for a right wing representative at the federal level, then the city councillor for that ward will also tend to be on the right of the political spectrum. This begs the same question we ask about provincial and federal elections: How are the substantial number of voters with a different political ideology in that ward being represented on their city council?

Proportional representation better reflects all kinds of diversity in the community, too.

The majority of residents of Metro Vancouver are not caucasian. Yet their 79% of their municipal councilors are white. Research shows that PR-STV has substantially improved diversity on city councils.

The repeal of PR-STV in many of the 24 US cities that once used it  – including New York City – was driven by those with a racist agenda. Researcher Amy Douglas sums it up:

“While the repeal of STV in these American cities was taken as evidence by opponents that the electoral system had failed, it was probably more accurate to conclude that this system was rejected because it worked too well. STV worked too well in throwing party bosses out of government… More importantly STV worked too well in promoting the representation of racial, ethnic and ideological minorities that were previously shut out by the first-past-the-post system. The political successes of these minorities set the stage for a political backlash that was effectively exploited by opponents of STV.”

Currently, over 200 US jurisdictions currently use semi-proportional systems such as Cumulative Voting or Limited Voting at the local level, brought in to improve the diversity on city councils, often following court rulings that winner-take-all voting was shutting minorities out. From the Sightline Institute:

“Many jurisdictions in the United States adopted either cumulative or limited voting in the 1980s and 1990s as a remedy for minority vote dilution under section 2 of the Voting Rights Act (VRA). In most cases litigation spurred the adoption. In these cases claimants showed that unmodified at-large voting systems diluted voting strength of people of color. People in the racial or ethnic minority made up a significant portion of the population but still had never, or almost never, elected a single representative, because majoritarian at-large elections allow voters in the majority to elect 100 percent of the representatives.”
a

Who is currently using PR for their local elections?

As noted above, Cumulative Voting or Limited voting is used in over 200 places in the US.

The fight for municipal proportional representation in Canada

Canadian cities must follow provincial legislation which outlines which kinds of voting systems are permitted at the municipal level. Currently, only winner-take-all systems (first-past-the-post and block voting) are permitted in each province.

In 2018, after a decade-long campaign, activists in Ontario succeeded in convincing the Ontario Liberal government to amend their legislation to give municipalities permission to use “ranked ballots”. Parties representing 62% of voters in the Ontario legislature approved the change.

69% of Ontario municipalities elect their councillors in at-large seats or multi-member wards. This means, if an Ontario city with at-large seats or multi-member wards had chosen to switch to “ranked ballots”, they would have been using PR-STV! As we know, it’s difficult to get incumbent politicians at any level of government to switch to proportional representation, but Ontario’s enabling legislation made future progress possible.

Unfortunately, in November 2020, Doug Ford’s Progressive Conservative false majority government repealed local choice legislation. (See Fair Vote Canada’s submission to the Justice Committee here). Repealing local choice was done over the opposition of parties representing 60% of the popular vote, activists, some cities who were planning to switch or undergoing local consultations, and one city which had already run an election using a non-proportional system with a ranked ballot, Instant Run-Off Voting. Since the Ford government has a majority of seats, despite receiving less than 41% of the popular vote, local choice is off the table again in the short term. The opposition parties have vowed to bring back local choice when the government changes. 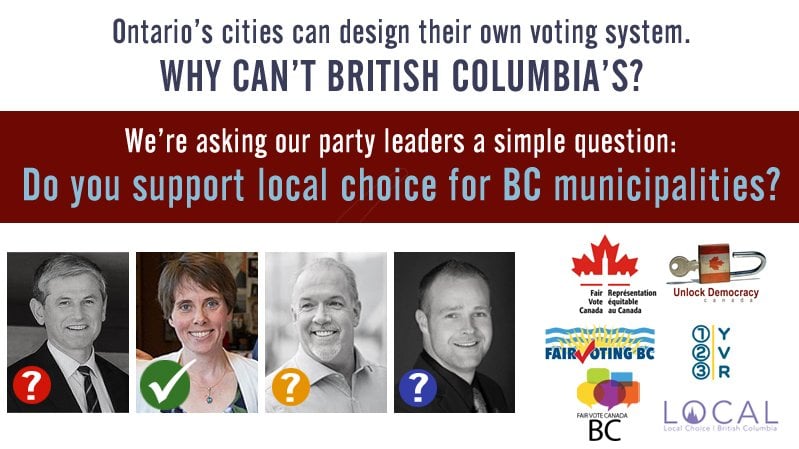 Proportional representation activists in BC have been lobbying the province for local choice legislation off and on for decades.

Unlike Ontario, where many cities use single member wards, every municipality in BC already elects members at-large or in multi-member wards. If the province granted permission to cities to choose their own voting systems, any city which adopted “ranked ballots” in BC would be adopting PR-STV.

There is the most momentum for the change in Vancouver. In 2017, the Vancouver Independent Election Task Force recommended switching to proportional representation, the design of which would be chosen by a local Citizens’ Assembly. The city has ignored their recommendation.

In the most recent provincial election, only the Green Party committed to push for cities to have the right to choose their own voting systems. Electoral reformers will continue to build coalitions and lobby the province for local choice.

Get Involved or Get More Information

Do you live in a municipality with multi-member wards or at-large voting, and would like to start pushing for proportional representation? Get in touch with Fair Vote Canada’s Municipal PR Liaison, Keith Poore, at [email protected]