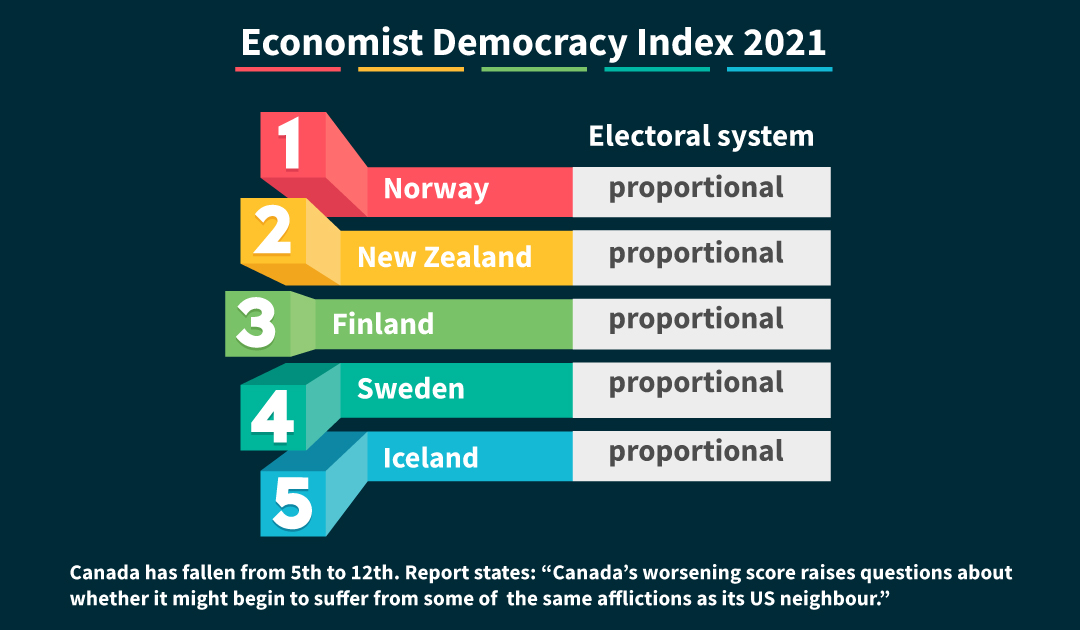 The Economist Intelligence Unit just released its annual Democracy Index. This year, Canada has fallen from 5th to 12th.

The top five democracies in the world – Norway, New Zealand, Finland, Sweden and Iceland – all use proportional representation (PR).

In fact, eight of the top ten countries use PR.

Commenting on Canada’s fall, the report issues a stark warning that our political problems are looking increasingly like those which have become entrenched in the United States:

“The sharp decline in the North America average score in 2021 was driven mainly by a deterioration in Canada… New survey data show a worrying trend of disaffection among Canada’s citizens with traditional democratic institutions and increased levels of support for non-democratic alternatives, such as rule by experts or the military.

Canada’s citizens feel that they have little control over their lives, a sentiment that has been compounded by pandemic-related restrictions on individual freedoms.

Canada’s worsening score raises questions about whether it might begin to suffer from some of the same afflictions as its US neighbour, such as extremely low levels of public trust in political parties and government institutions.”

Considering how the “Freedom Convoy” burst onto the scene, the warning was prescient.

The Canadian data from the World Values Survey – factored into the Economist Intelligence Unit’s analysis – paints a troubling picture of citizen mistrust in democratic institutions in Canada:

When Justin Trudeau slammed the door on proportional representation in 2017, he claimed PR would usher in “an era of political instability and uncertainty” by giving representation to “extremist” voices.

It’s hard to see how our winner-take-all political system is protecting us now.

The former leader of our Official Opposition Party, Erin O’Toole, welcomed the convoy – and was promptly replaced by a leader who would advocate for the convoy even more loudly in Parliament.

Despite overwhelming consensus among experts for proportional representation, Trudeau contended that “we’ve figured out how to make our differences a source of strength… better than any other country in the world.”

It’s hard to imagine what the world thinks of that now.

It was our convoy – birthed in the context of winner-take-all politics – that has inspired copycat protests by the far right across Europe, not the other way around.

It’s frighteningly easy to see where this could go. If our politics becomes even more infused with the polarization that has crippled the United States (which also uses a winner-take-all system), even more Canadians will feel shut out and afraid.

We will see a hardening of “us vs them”.

Party war rooms will scramble with greater fervor to push voters into already overstuffed, power-hungry tents, with messages about the urgency of defeating the enemy (your neighbour).

It’s clearly time for our rudderless leaders to blaze a new path.

While there are no easy answers, clues to the best solutions at hand are not hard to find.

Cambridge University’s 2020 Satisfaction with Democracy Index found seven countries they described as an “island of contentment” in the storm, where satisfaction with democracy has actually increased. The authors point to well-established research showing that citizens in countries with proportional representation are more satisfied with their democracy – even if the party they supported is not in power.

In 2020, 97% of respondents told Leger that they want an electoral system where parties work together more in the common interest.

In the World Values Survey, Canadians prioritized “giving citizens more say over important government decisions” ahead of “maintaining order in the nation” and “fighting rising prices”. Confidence in experts to guide policy exceeded confidence in our Parliament.

If greater cooperation, forums for respectful dialogue, decisions backed by experts, and a stronger voice for citizens hold promise to avert the problems ahead, the answer is clear: A National Citizens’ Assembly on Electoral Reform.

80% of Canadians, across party lines, support such an initiative. A motion to study the idea was backed by all MPs on a Parliamentary Committee except the Conservatives. It’s time for our leaders to get on with it.