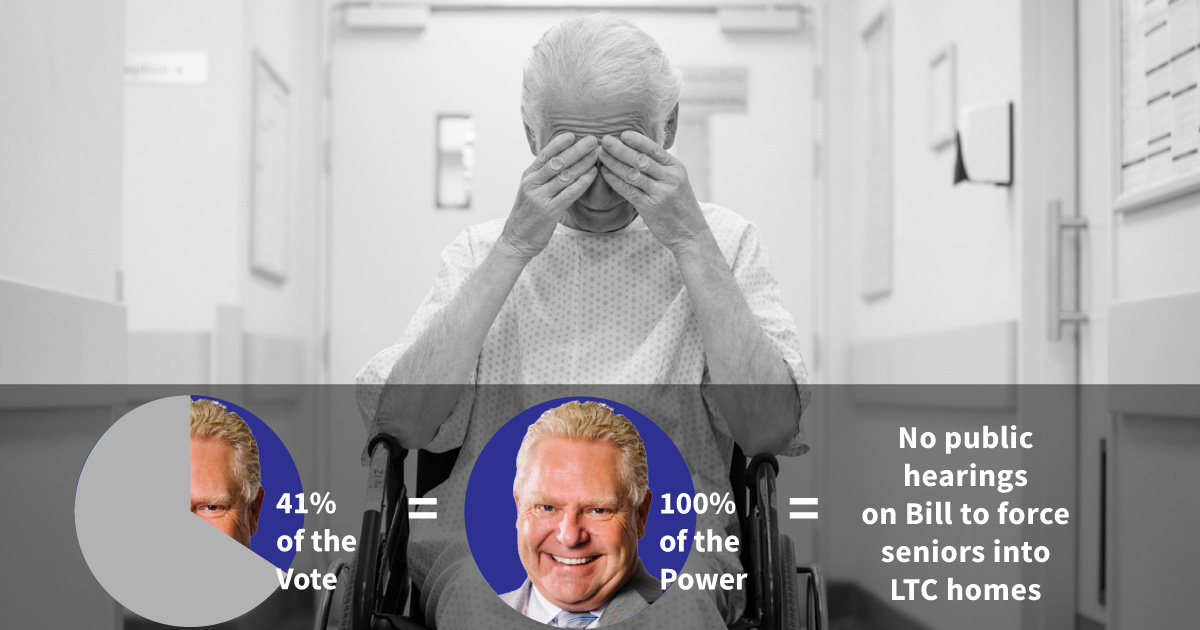 The Ford government refused to subject Bill 7 to scrutiny at a legislative committee. That would at least have offered the public a chance to weigh in through public hearings.

Since first-past-the-post gave Doug Ford’s Conservatives a “majority government” with the support of less than 18% of eligible voters there’s little that anybody can do.

Ford didn’t campaign on forcing patients into long-term care homes, despite the crisis in the health care system being well known before the June 2 election.

Like the recently announced “strong mayor” bill, it’s not even plausible to claim that Ford’s own voters wanted this.

Doug Ford is abusing the dubious mandate gifted to his party by the distortions of our archaic electoral system.

What does Bill 7 do?

The implications of Bill 7 are profound for anyone hospitalized and deemed in need of an “alternative level of care”, as well as their families.

Seniors for Social Action Ontario sums it up:

The government has not specified how far away you can be sent as of yet.

If you refuse to be transferred to a facility not of your choice, the hospital will be able to charge you an undetermined rate – currently from $62 per day co-payment to $1800.00 per day for an “uninsured service”.”

Those forced to move will include patients who need home care, rehabilitative care and palliative care, as well as those on waiting lists for a long-term care home of their choice.

For all those who will now be forced into long-term care homes they don’t want to live in, the system has failed them.

This is the result not only of the Ford government, but of successive false majority governments who saw the crisis coming but did little to prevent its arrival.

What recourse does the public have?

In our first-past-the-post system, what recourse do citizens have to Bill 7?

If Ford’s own MPPs have any private doubts, they’re not going to speak up. Ford’s promised “iron ring” around long-term care homes may not have materialized in time for the eighth wave of COVID-19, but the iron ring around parties is almost impenetrable.

Party discipline in Canada is extreme, and decision-making power rests almost entirely at the top.

While Ford has been known to change his mind in response to overwhelming public pressure, he has not been known to repeal his own legislation.

The patients occupying these hospital beds are in a poor position to become powerful political advocates on their own behalf. The pleas of groups protesting Bill 7 have fallen on deaf ears.

This leaves only the courts.

While there’s no one-size-fits-all health care delivery model that can cure all ills, there are political systems that do a much better job at listening to voters and delivering what they want.

Proportional representation systems ensure that if 40% of voters support Party A, those voters will elect about 40% of the MPPs.

With proportional representation, parties representing a majority of Ontario voters would be in control of the legislature, and Bill 7 might not have been introduced in the first place. Compromise would have been a necessity, not a frill.

It should come as no surprise that countries with proportional representation have better overall population health, and were shown to have lower death rates during the first wave of COVID-19.

Winner-take-all systems keep the focus on band-aid solutions. They keep activists chained to a cycle of demanding urgent action on short-term crises.

When governments aren’t listening it means that advocacy groups, whose resources are often stretched thin, must focus on mobilizing support and media attention to stop the worst immediate outcomes.

As researchers have noted, advocacy groups in a country with winner-take-all voting “are accustomed to a direct and confrontational style based on threats and pressure… targeting media and the public… often coupled with legal strategies.”

Advocacy groups in countries with proportional representation “pursue subtle and more consensus-oriented tactics based on constructive and informed participation.” Instead of trying to kill bad bills, “lobbying is much more oriented towards problem solving and revising the content of policy proposals.”

It goes without saying that long-term problems require long-term planning to solve. To make sustainable progress, collaboration of multiple parties and stakeholders is a must.

With first past the post—or any winner-take-all voting system—massive policy lurches can occur following an election. A very small swing in the popular vote can lead to a radically different government and a 180-degree reversal in policy.

A new 39% “majority” often spends their first 100 days cancelling and dismantling the programs of the previous government.

Hard-won progress achieved by advocates during the reign of one party is often flushed down the toilet when a different party takes power.

With proportional representation, even when governments change, the swings in policy tend to be less extreme because usually at least one coalition partner continues in government.

Some of the most successful policies and programs have been created―and maintained―through cooperative governments.

When it comes to the best outcomes on health, climate, and democracy around the world, the evidence for proportional representation speaks for itself.

For any party serious about getting off the merry-go-round of crises by fundamentally fixing Canada’s health care system, prioritizing proportional representation is a prescription for progress.