Proportional Representation for Canada: How would small parties fare?

NOTE: The simulations in this post reflect results reported as of September 26, 2021.

The results of this election once again demonstrate that Canada’s archaic voting system is fundamentally incapable of giving voters what they voted for. Results were wildly skewed and over 8 million voters (52%) elected no-one. Voter disengagement from the process is high: only 62% of eligible voters bothered to show up.

With these election results, many people are wondering how things would be different if Canada had proportional representation – and what would happen to small parties like the PPC and the Greens?

Frankly, many have expressed concerns about the PPC, a party that is widely perceived as far-right “extremist” and anti-vax winning a large bloc of seats in Canada’s Parliament with proportional representation.

When the media highlights simulations of purely proportional systems showing 20 seats going to the PPC, these fears increase. But those results are very unlikely in Canada. Our simulations (below) show why.

Read more about extremism and polarization in first past the post versus proportional systems.
/

Our experts have prepared two simulations based on how people voted in this 2021 first-past-the-post election. 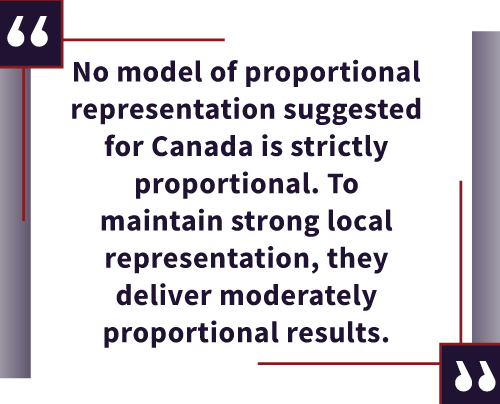 At the end, we’ve also provided real-life examples for both of these systems of a small party, from countries with systems similar to those used in our simulations.

Caveat: When you change the voting system, voter behaviour changes, too, so real-world results would no doubt differ from our simulations. With proportional representation, people feel less pressure to vote “strategically” for the lesser evil. Research also shows that voters are less likely to vote for far-right parties in proportional systems compared to those with winner-take-all systems like ours.
/ 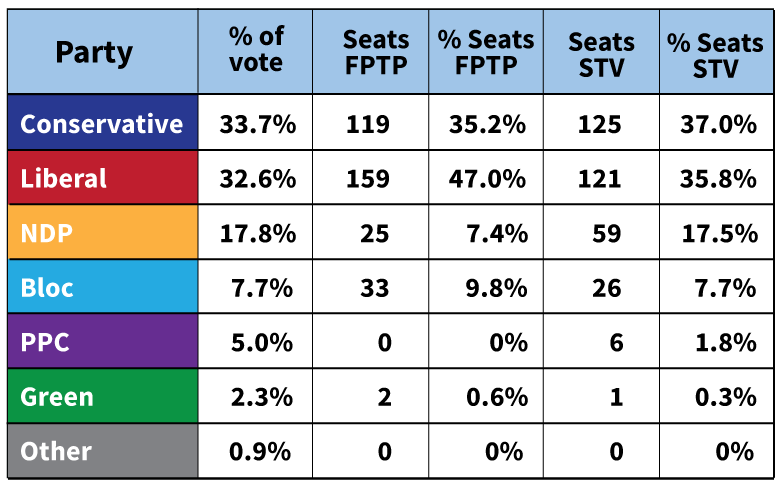 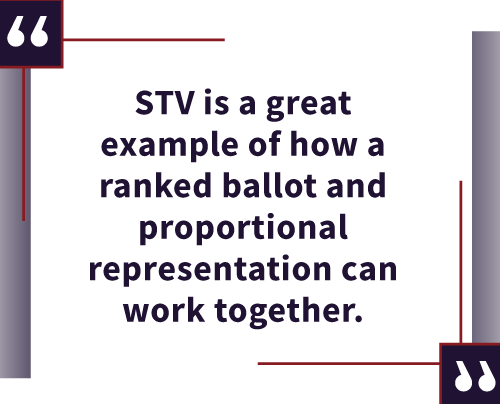 STV is a great example of how a ranked ballot and proportional representation can work together.

When their support bounces back to more traditional levels, we are confident that Greens would win substantially more seats under STV than first-past-the-post, as they do with STV in Ireland, Tasmania and Australian Capital Territory.
/ 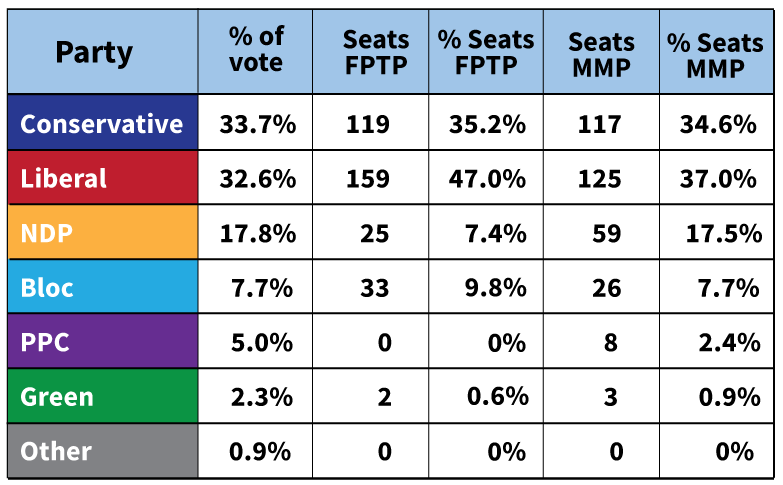 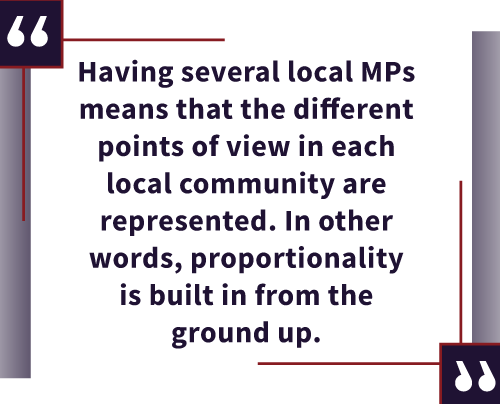 Having several local MPs means that the different points of view in each local community are represented in the legislature. In other words, proportionality is built in from the ground up.

In a 5-member riding, a candidate needs about 16.7% support from local voters to get a seat, although the last candidate can be elected with substantially less.

How does this work out for voters of small parties?

Ireland regularly elects representatives from smaller parties in areas where they have popular local candidates.

They were represented by two of their strongest local candidates.

A fully proportional share of seats for their party would have been about four representatives.

In 2020, the popular vote for the Green Party rose to 7.5%. In that election, they secured 7.7% of the seats (12 representatives). Fully proportional.

The barrier to election is much lower for small parties than under first-past-the-post, giving them some representation. However when a party is very small, the results are not usually fully proportional.
/

To win a proportional list seat in one of the regions in Wales, the party needs to get about 8% of the vote in that region. 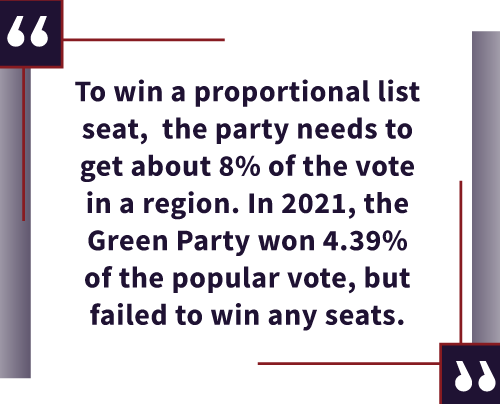 In 2021, the Green Party won 4.39% of the popular vote, but failed to win any seats. They didn’t win any ridings with first-past-the-post and their level of support was too low to win any proportional list top-up seats.

In that same election, another small party, the Liberal Democrats got 4.3% of the vote but they elected one MP in the 60 seat chamber. This MP was elected in a riding using first-past-the-post, just like our Green Party wins seats in Canada. The party failed to win any proportional list seats.

In other words, with a moderately proportional MMP system, smaller parties can break through much more easily than with first-past-the-post, but they must attract enough of the popular vote in a region to qualify for proportional list seats. 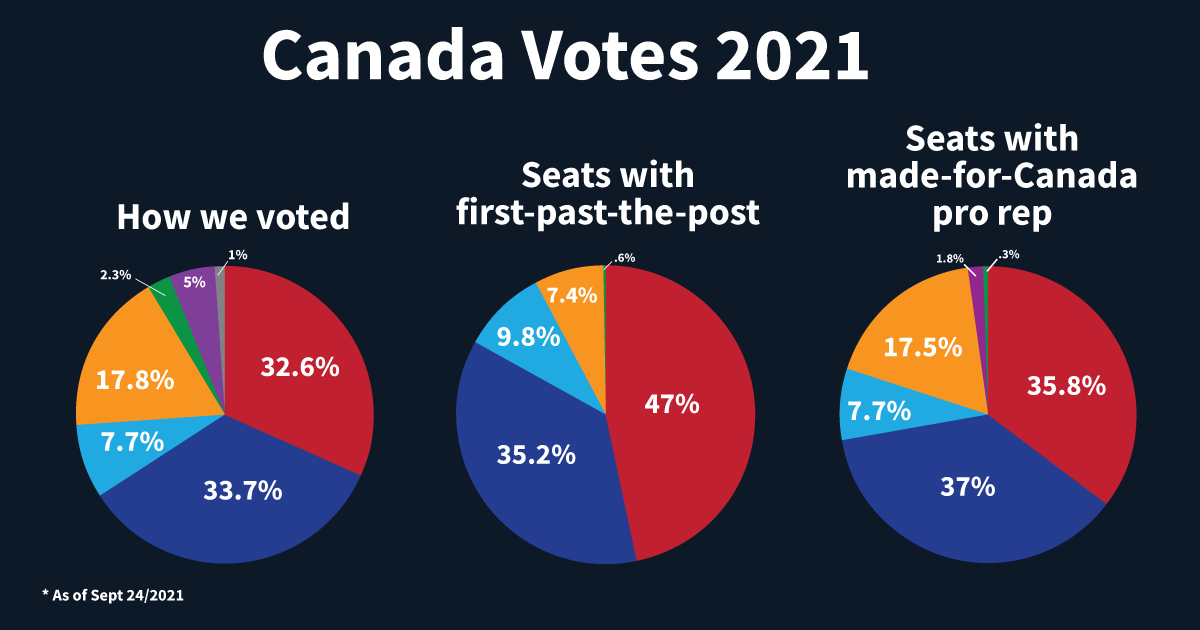