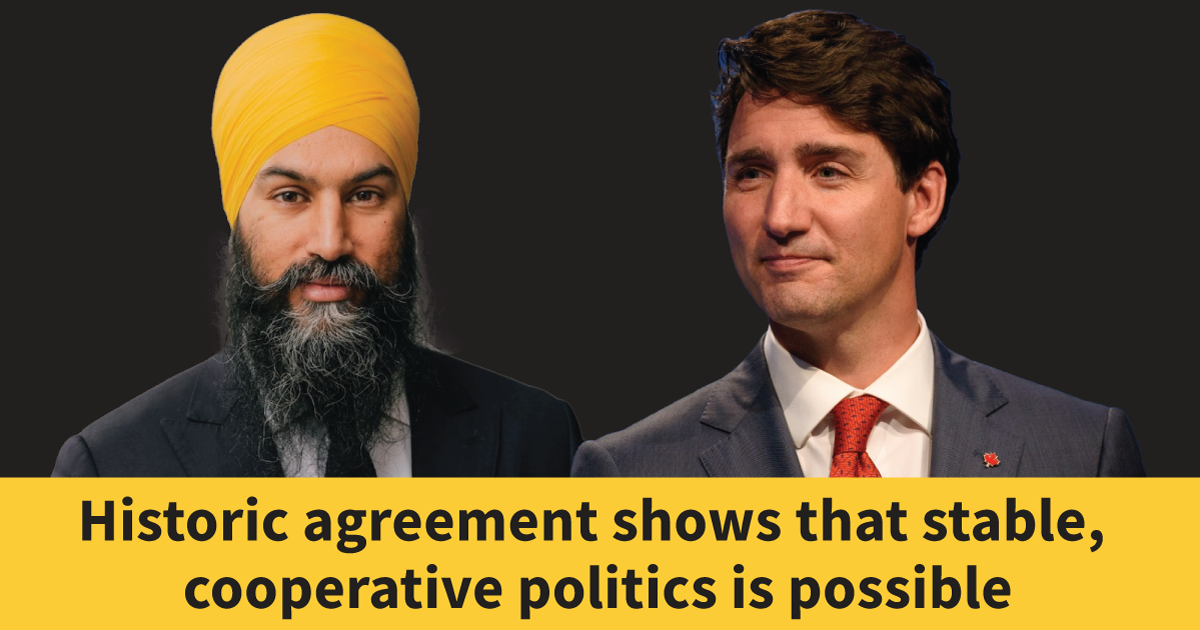 The CASA (Confidence And Supply Agreement) between the NDP and Liberals is a heartening first step to a new kind of politics in Canada, where parties choose to look for common ground rather than constantly attack each other. Under proportional representation, this kind of cooperation wouldn’t be noteworthy―it would just be a normal day in Parliament.

Last year’s federal election―when Canadians delivered much the same Parliament as the previous one―sent a clear message that Canadians weren’t ready to hand any single party the keys to the car. They want parties to continue working together to deliver programs the majority of voters support. Today, that is what they got.

With a winner-take-all electoral system fueling power-hungry politics, minority governments have typically been short-lived affairs in Canada. Parties often have their finger on the trigger, watching the polls in hopes of calling an election when they can seize majority control with less than 40% of the vote.

Today’s announcement is proof that Canadian politicians can do better.

In modern democracies with proportional representation―over 80% of OECD countries―cooperative agreements between parties are the norm.

We could have this in Canada if every vote counted, which the majority of voters want, and voted for in 2015

In Germany, the Social Democrats (a centre-left party), the Greens, and the Free Democratic Party (a business-friendly party of the centre), are in a coalition government.

In Ireland, the two large, traditional centrist parties (one which leans left and one right) are in a coalition government with the Greens.

Only the few remaining OECD countries stuck with winner-take-all voting systems cling to an outdated political model where the holy grail goal of success is a single party with one third of the vote unilaterally forcing its will on everyone else.

PR produces stable, cooperative governments that have no more frequent elections than countries with winner-take-all systems. The evidence is clear: countries with PR get better results for voters―on economic growth, environment and democratic satisfaction.

This agreement is based on an agreement to work together where parties share a desire for a similar medium-term outcome. This is exactly what we saw last June when all the MPs on the Procedure and House Affairs Committee except the Conservatives voted for an NDP motion to do a study of a National Citizens’ Assembly on Electoral Reform. We expect the NDP and Liberals to continue this shared agreement.

Today, many Conservatives are feigning outrage, deliberately misconstruing a limited supply and confidence agreement between parties that together got 50.44% of vote as a “socialist coalition power grab”.

Right wing voters in Canada need to ask themselves the real reason why they are increasingly shut out of the policy conversation. They need to pin the blame squarely on our outdated voting system.

The Conservative Party, an increasingly strained and dysfunctional big tent, has no plausible dance partner. By insisting on maintaining first-past-the-post, and trying to squeeze social conservatives, progressive conservatives, libertarians and far-right populists into the same tent, the party is failing not only its own voters, but Canadian democracy.

Across Europe, as this 2016 map shows, proportional representation means that right wing parties diversify, offering voters more real choice. This allows parties on the right to work together and govern together―as well as find common ground with parties across the spectrum.

As MP Michelle Rempel suggested in her op-ed for proportional representation in the Western Standard, Conservatives may be shooting themselves in the foot by opposing reform:

Conservatives have often opposed a more proportional form of representation out of fear that they could not win with it. This may be selling ourselves short. Under a different electoral system, a constellation of parties representing different views on the right-of-centre spectrum might allow us to work in concert on the issues that we broadly agree upon, while definitively agreeing to disagree on the things that we don’t. That is, instead of spending time figuring out how to get social and progressive conservatives to put water in their respective wine, a change in the electoral system could promote all political parties to take more clear stances on issues and lessen infighting.

Proportional representation is not about what’s best for any one party, or one side of the political spectrum. It’s about fairness for all voters. In the last federal election, 52% of voters elected no-one.

The consequences of shutting so many people out of the system for so long, of concentrating all the power at the top of one party, have been acutely felt on the streets of Ottawa and around the country.

Unless our parties have the courage to modernize our electoral system, and make voters truly equal, what we saw this year could be just the beginning.

Support for each of Canada’s two big parties has hovered for years around one third of the electorate, making false majorities even harder to attain. It’s time for Canada’s political leaders to adapt their politics to the cooperative, inclusive government that Canadians want.

Today’s announcement is a small step in that direction, but the real solution for all voters is to make inter-party cooperation permanent―through proportional representation.

Democracy can’t wait – let’s get on with it.