Steven Del Duca’s pledge to force through winner-take-all ranked ballots in Ontario—favoured by the Ontario Liberal Party only—may meet with more backlash than support from voters.

A poll of Ontarians conducted October 29th to November 1 by Leger shows that 74% oppose the idea of one political party unilaterally bringing in its preferred electoral system. Only 8% would support this approach: 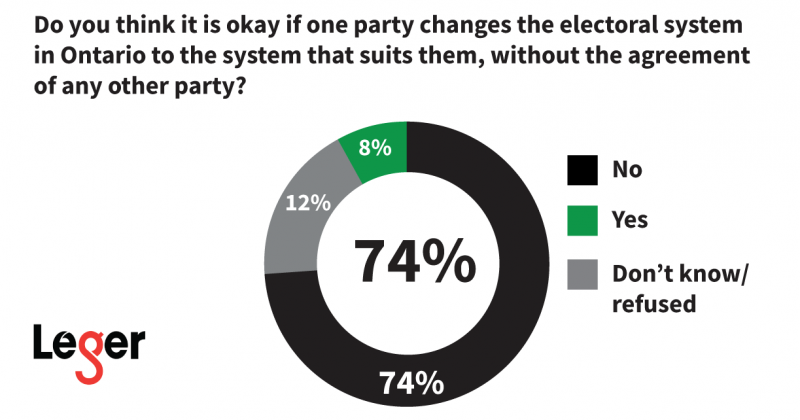 This includes 75% of Ontario Liberal Party voters, 72% of NDP voters, 78% of PC voters and 87% of Green voters who oppose one-party decision-making on electoral reform. 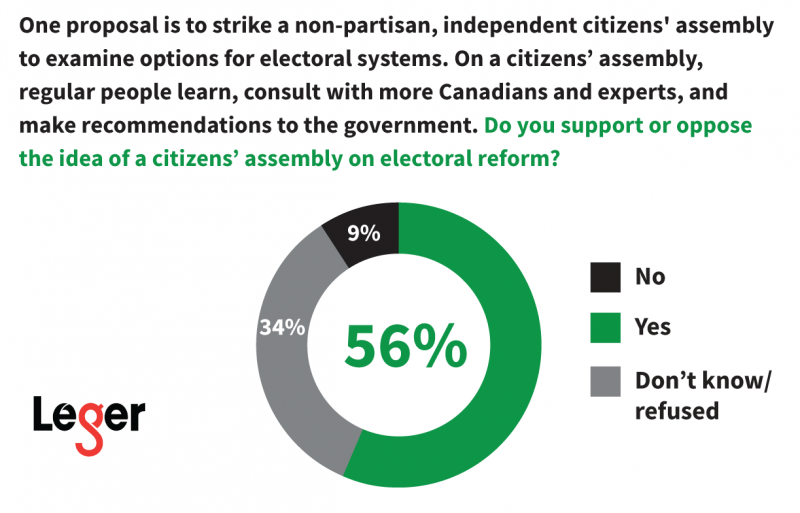 This includes support for a Citizens’ Assembly on Electoral Reform from 60% of Ontario Liberal Party voters, 70% of NDP voters, 61% of PC voters and 71% of Green voters.

Asked to choose between the prospect of a single party which forms a government deciding on a voting system, or taking advice from a citizens’ assembly, support for citizens’ assembly was almost seven times higher. “Support for one-party decision-making was barely on the radar” said Anita Nickerson, Executive Director of Fair Vote Canada, which published the Leger poll.

A Citizens’ Assembly on Electoral Reform was the option supported by 67% of Ontario Liberal voters, 77% of NDP, 69% of PC and 74% of Greens.

Citizens’ assemblies are gaining traction around the world as a trusted and effective way to deal with challenging questions, from abortion to climate change. A 2020 OECD report looking at 279 such processes recommended them especially for complex problems involving trade-offs―problems that need to be removed from political interests and short-term electoral cycles.

Just a few weeks ago, a majority of MLAs in PEI’s legislature voted for a motion to establish a Citizens’ Assembly on Proportional Representation. 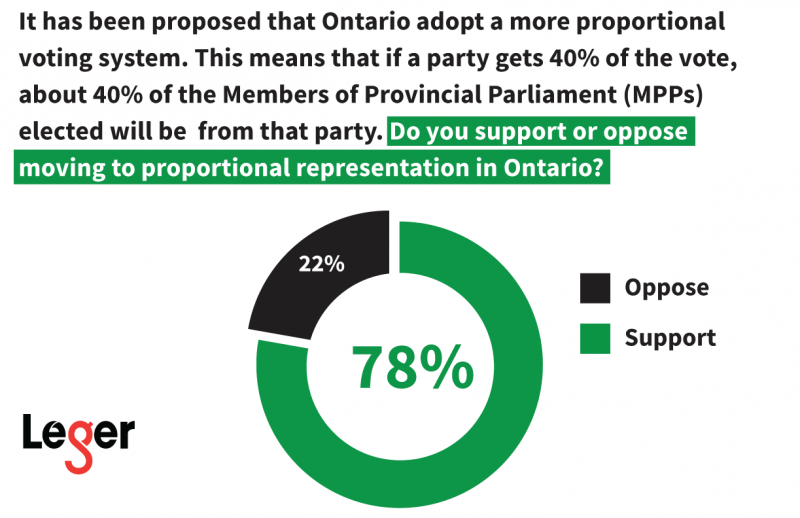 Support for proportional representation included 79% of Ontario Liberal voters, 86% of NDP, 77% of PC voters and 72% of Green Party voters.

“It also shows that Ontario Liberal Leader Steven Del Duca is on the wrong track. Del Duca was 100% correct that voters have developed a deep distrust of political parties on electoral reform. They want to see action that actually leads to a real improvement in our legislature, not empty promises or a partisan-driven train wreck.

“Too often, parties are seen pushing electoral reform that will benefit their party at the expense of other voters. When a party’s preference doesn’t line up with the evidence, voters lose. That’s why it’s crucial that any recommendation for a new system be based on a process we can trust.

“A non-partisan Citizens’ Assembly on Electoral Reform is strongly supported by a majority of voters of all parties and is by far the best way to get the informed, trusted recommendation that Ontarians need.”