And… the simulations are in! At Fair Vote Canada’s request, electoral modelling expert Byron Weber Becker has completed simulations on the effects that Steven Del Duca’s “ranked ballots” (properly called Alternative Vote) would have had on previous elections in Ontario. 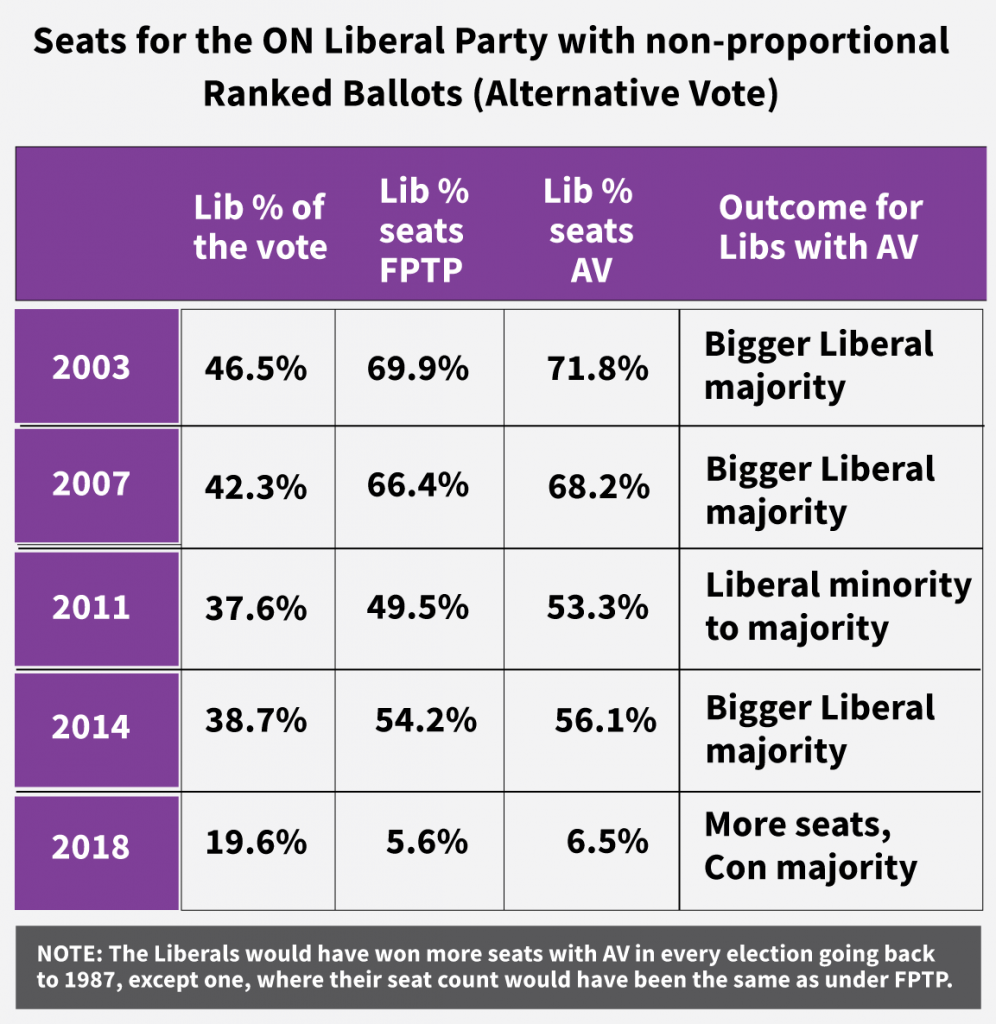 The result: AV would have helped the Liberal Party at the expense of other parties in every election since 2003. Even their 2011 minority government would have been turned into a majority.

The Liberals would not have done worse with AV in any election, going all the way back to 1987. In only one election (1990) would they have ended up with the same number of seats as under FPTP. In every other election, they would have won more seats.

The results of the simulations should give Ontarians pause. Should a single party have free rein to implement a voting system that clearly advantages that party over all others? Or does it serve us better to get an evidence-based recommendation on which system to use from a neutral body of informed voters, such as a Citizens’ Assembly?

Says Anita Nickerson, Executive Director of Fair Vote Canada, “We’ve seen this attempted ‘bait and switch’ before at the federal level. Del Duca knows that voters are tired of ‘majority’ governments with the support of only 30-something percent of voters. He’s betting  that people won’t pay attention to the details, and that they’ll accept a non-proportional system that benefits only the Liberal party―in fact, the only system that is demonstrably worse than our current one.”

This data from the simulations underscores why politicians must be kept at arm’s length from the electoral reform process: self-interest invariably trumps “the common good”. Rather than forcing through their pet system then belatedly offering a toothless consultation to citizens, the Liberals should show integrity by acknowledging their conflict of interest, stepping aside, and implementing a process that citizens can trust.

Such a process need not be reinvented: it’s one that is proven and has been gaining steam around the world. Citizens’ Assemblies have been used to find consensus on tough issues that stymy politicians, from abortion in Ireland to climate change in France.

A Citizens’ Assembly on Electoral Reform for Ontario should be given a mandate to examine all options, including the status quo and, yes, even the Alternative Vote. The government needs to commit to implementing those recommendations without interference. That’s what real public service looks like. Is Del Duca up for it?