Canadians want action on electoral reform! Where are our leaders? 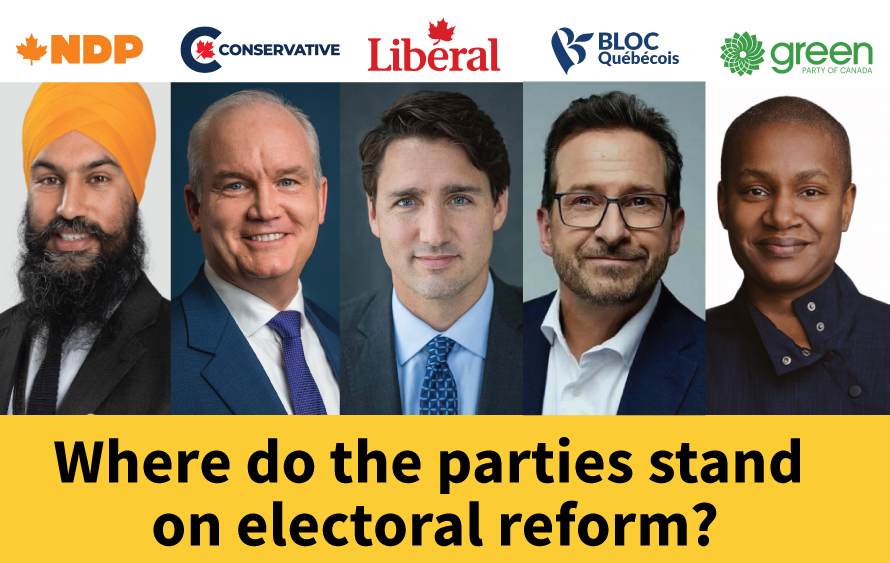 Canadians want electoral reform – where are our leaders?

As Canadians watch the televised leaders’ debates, there’s one topic they won’t hear much about: electoral reform.

“Canadians from across the country have emailed CBC News to express their frustration with an elections system they say still doesn’t properly reflect how people vote.”

The reason we’re having this unnecessary election is that our winner-take-all voting system lets a single party grab all the power with less than 39% of the vote.

More Canadians than ever are looking for leadership to make every vote count―and the silence from political leaders on the campaign trail is deafening.

In response, thousands of volunteers from coast to coast are delivering over 300,000 door hangers during this election, urging Canadians to ask their candidates to commit to action on electoral reform! 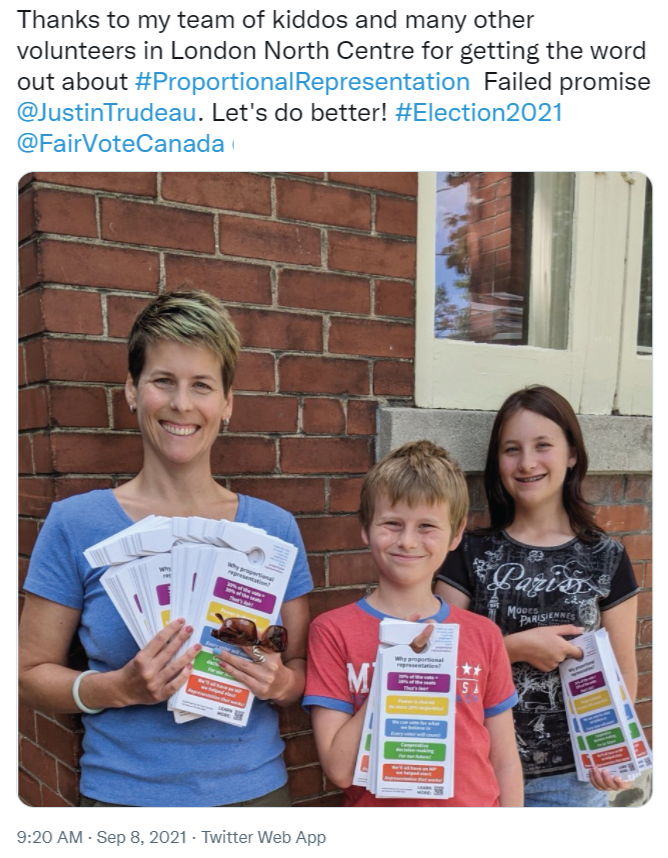 “Just came back from delivering about 125 in half a poll today. Interacted with 5 people. All were really receptive to the message and all knew about it. Honestly, I don’t think I’ve ever see such receptiveness.”

And on our answering machine:

“Hello, Fair Vote Canada. I’m calling because I want to thank you very much for your efforts, for your perspective. And for reaching out to people. I know we received it on our door.

I think this is something, probably the most important thing that Canadians can do, is to make this proper representation in our voting system. It will enable our country to gain back its freedom for the people and more accountability. I just wanted to offer my gratitude for your efforts. Thank you.”

Our TV ad will be on Global News after the leaders’ debate Sept 9 and during the 6 PM news September 10!

Thanks entirely to the generosity of individual supporters like you, 1.5 million will see our TV ad on Global News after the debate and the next day!

How we got here―and where the parties stand today

In 2017, the Liberals abandoned their popular promise to make every vote count, claiming “no consensus” despite 88% of the experts recommending proportional representation.

Justin Trudeau later stated he would only consider winner-take-all ranked ballots (properly called Alternative Vote). AV was supported by no other party and only 4% of the experts, because it would exacerbate the problems with first-past-the-post. (Note: ranked ballots can be used very successfully as part of a proportional voting system).

Although neither the current Liberal nor Conservative election platforms make mention of democratic renewal, the Liberals on the Procedure and House Affairs Committee joined NDP and Bloc MPs in June 2021 in passing an NDP motion to study a National Citizens’ Assembly on Electoral Reform. (Greens are supportive but not on this committee).

Endorsed by Kevin Page and Lloyd Axworthy and supported by 80% of Canadians, a National Citizens’ Assembly on Electoral Reform would put the country back on track for a stronger democracy―this time with an independent, non-partisan process that all Canadians can trust.

Two parties, the NDP and Greens, have made strong platform commitments to move ahead with a citizens’ assembly, as outlined below this email.

Your hard work, perseverance, and determination is paying off. The tidal wave of discontent about Canada’s voting system is growing too big for political leaders to ignore.

They can offer real leadership that Canadians can trust on electoral reform, or be swept aside by another leader who will.

Where the parties stand: The platforms

Note: Fair Vote Canada would also like to recognize the longstanding efforts for proportional representation of Liberal MP Nathaniel Erskine-Smith.

“A New Democrat government will bring in mixed-member proportional representation that works for Canada – and we will do it in our first mandate in government. We’ll establish an
independent citizen’s assembly to recommend the best way to put it in place for the next election to ensure both local representation and a federal government that reflects the
voters’ choice of parties. Once Canadians have the opportunity to experience the new voting system and compare it to the old one, we will hold a referendum to confirm the choice.”

* ADDITIONAL NOTE FROM FAIR VOTE CANADA: In June 2021, NDP MP Daniel Blaikie put forward a successful motion at the Procedures & House Affairs Committee to study a National Citizens’ Assembly on Electoral Reform. Although it passed, parties will not be bound by this vote in the next Parliament.

Fair Vote Canada commends the NDP for their crucial and long-standing advocacy for proportional representation.

We are pleased that they support a national citizens’ assembly. However, the purpose of a National Citizens’ Assembly on Electoral Reform is to empower citizens to look at the evidence for all options, not just one electoral system.

When parties do not agree on electoral systems, an open-minded Citizens’ Assembly that truly lets citizens lead is critical to building a process that everyone can trust―no matter which party they support.

A Citizens’ Assembly restricted to considering only one electoral system is not sufficient to achieve this.

In addition, research on referendums and the expert advice given to the federal electoral reform committee in 2016 raise grave concerns about whether referendums produce an informed decision on electoral reform. FVC prefers a more deliberative, independent, citizen-led review of any new system after it has been in use for a few elections.

A Green government will:

● Always support modernising our electoral system, to be based on Proportional Representation. The evidence of the benefits for citizens, and for parliamentary outcomes, are overwhelmingly clear.

A Citizens’ Assembly on Democratic Renewal

Greens will push for a Citizens’ Assembly on Democratic Renewal to be convened as early as possible under the new Parliament. Recognizing the conflict of interest in having politicians re-design the system that elected them, the Assembly would be a diverse and randomly selected body of citizens, brought together with a mandate to consider and to provide a set of recommendations to our Parliament on four interrelated issues:

The process would be supported by a public service secretariat, and facilitated by an independent and non-partisan organization, who would bring in expert witnesses, as well as individuals and groups directly affected by the issue. Properly constituted Citizens’ Assemblies, such as Ireland’s Assembly of 2016-18, are viewed as equitable, free from political interference, and acting in the public interest. Their composition can be more reflective of Canada’s diversity than Parliament; their procedures can be more deliberative and consensus-driven; and they can make
recommendations on sensitive foundational questions that elected officials avoid. Acting in this way, Citizens’ Assemblies can help renew the trust and confidence of Canadians.

* In June 2021, the Procedures & House Affairs Committee passed a motion to study a National Citizens’ Assembly on Electoral Reform. Although it passed, parties will not be bound by this vote in the next Parliament. The Greens support this, but could not vote for it because they didn’t have a seat on this committee.

Fair Vote Canada commends the Greens for a well-rounded mandate on democratic reform and for being vocal in their support of proportional representation.

There is nothing in the Liberal platform about electoral reform or continuing the important work started on a National Citizens’ Assembly on Electoral Reform at the Procedures and House Affairs committee in June 2021 (see note below).

This is a deeply disappointing omission by the Liberal Party. In fact, some of the Liberal candidates are still sending constituents the form letter from 2017 claiming there was “no consensus” (not true for citizens and experts – see here). A National Citizens’ Assembly on Electoral Reform is a way to take electoral reform out of the hands of the parties with a vested interest (who do have trouble finding a consensus for the past 100 years) and put it in the hands of informed citizens. Please contact your Liberal candidate and encourage them to commit to continue the work towards a National Citizens’ Assembly on Electoral Reform.

* In June 2021, the Liberals helped pass a motion at the Procedures & House Affairs Committee to study a National Citizens’ Assembly on Electoral Reform. However, parties will not be bound by this vote in the next Parliament.

There is nothing in the Bloc platform about electoral reform.

*In June 2021, the Bloc helped pass a motion at the Procedures & House Affairs Committee to study a National Citizens’ Assembly on Electoral Reform. However, parties will not be bound by this vote in the next Parliament..

There is nothing about electoral reform in the Conservative Party platform.

* In June 2021, the Conservatives voted against a motion at the Procedures & House Affairs Committee to study a National Citizens’ Assembly on Electoral Reform. The reason they gave for voting no was that the motion included a Liberal amendment to write a second report (after the report on a National Citizens’ Assembly on Electoral Reform) looking at what could be learned about citizens’ assemblies in general.

NOTE ON THE PEOPLE’S PARTY OF CANADA: There are usually 10-20 parties in Canada running who do not have seats in the House of Commons. Fair Vote Canada does not have the resources to list the positions of all of these parties and has therefore only featured parties with at least one seat. Maxime Bernier has not advocated for electoral reform. There is nothing in the current PPC platform on electoral reform.