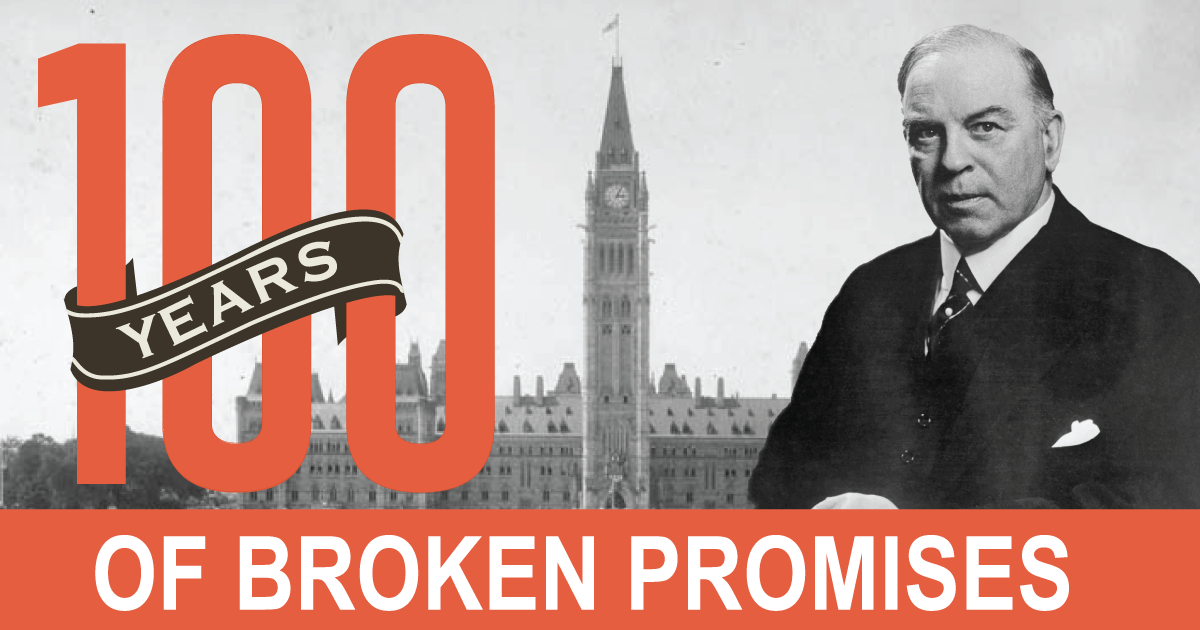 Politicians in Canada have been promising Canadians proportional representation for 100 years.

2021 is the 100 year anniversary of the first federal government elected on a promise to introduce proportional representation. 1921 is also the year Canada ceased to be a two-party system.

The 1921 campaign promise followed a Liberal Party resolution in 1919 to endorse proportional representation (Single Transferable Vote – STV-PR). Prime Minister MacKenzie King was even a member of the Proportional Representation Society of the time.

Once in power, proportional representation ceased to be in the short-term self-interest of the party or its MPs, a pattern that has continued to this day with governing parties of all partisan stripes, regardless of their promises or the evidence in front of them.

If we want a solution that is genuinely in the common interest, we need a process we can trust. We need a National Citizens’ Assembly on Electoral Reform.

A Brief History of Broken Promises 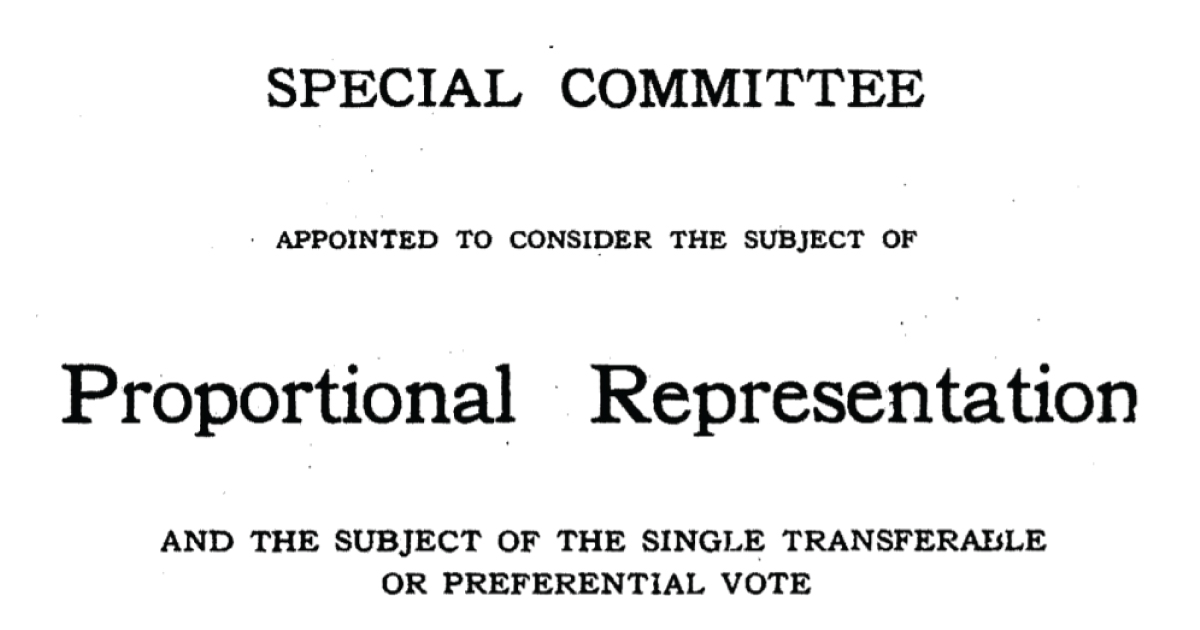 The Liberals ran on proportional representation in the 1921 election. This followed a Liberal party resolution in favour of PR, under the leadership of MacKenzie King. King was a PR supporter and member of the Proportional Representation Society.

Once in power, the Liberals set up an all-party committee to study the issue, but they did not advocate for PR. With neither the Liberals or the Conservatives in favour, the committee rejected PR.

One of the Independent Progressive Party MPs, William Good, put forward a motion to the House of Commons advocating a small step forward in time for the next election: That “one or more multi-member constituencies” should be created in time for the next election “for the purpose of demonstration the working and effects of the system of true proportional representation.” The motion was defeated.

As the Conservatives (who were not in favour of PR) pointed out:

A CCF MP later reflected on what happened at the first all-party committee:

In 1933, MacKenzie King again promised that if the Liberals were elected, they would introduce proportional representation. King stated that there was something “fundamentally wrong” with electing members in single member constituencies when entire cities or provinces were left without representation from one of the major political parties.

The Special Committee on Elections and Franchise Acts was struck to examine “the proportional representation system; the alternative vote in single member constituencies; compulsory registration of voters; and compulsory voting.”

The committee recommended no change because the MPs on the committee said they had not seen evidence that proportional representation would be “conducive to good government.” 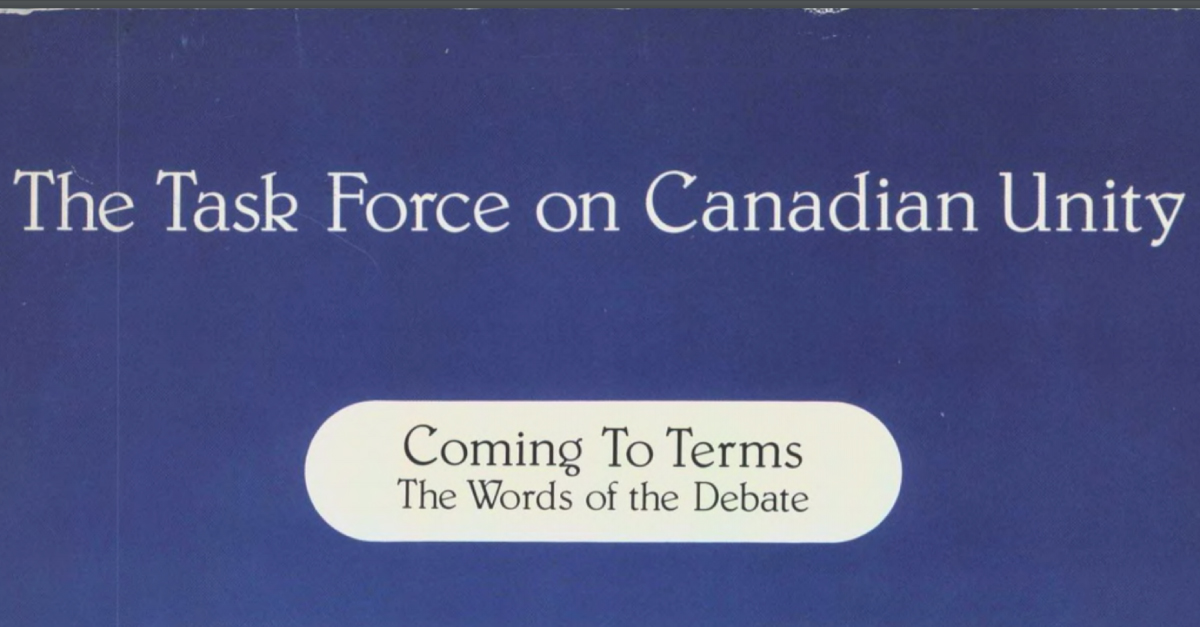 The Task Force on Canadian Unity (sometimes called the Pepin-Robarts Commission) was established 1977 by the federal government. It was co-chaired by former federal Liberal minister Jean-Luc Pepin and former Conservative Premier of Ontario John Robarts. The purpose of the Task Force was to recommend how to strengthen national unity. It recommended “a mixed electoral system with an element of proportional representation to ensure a broader regional representation in federal political parties”. 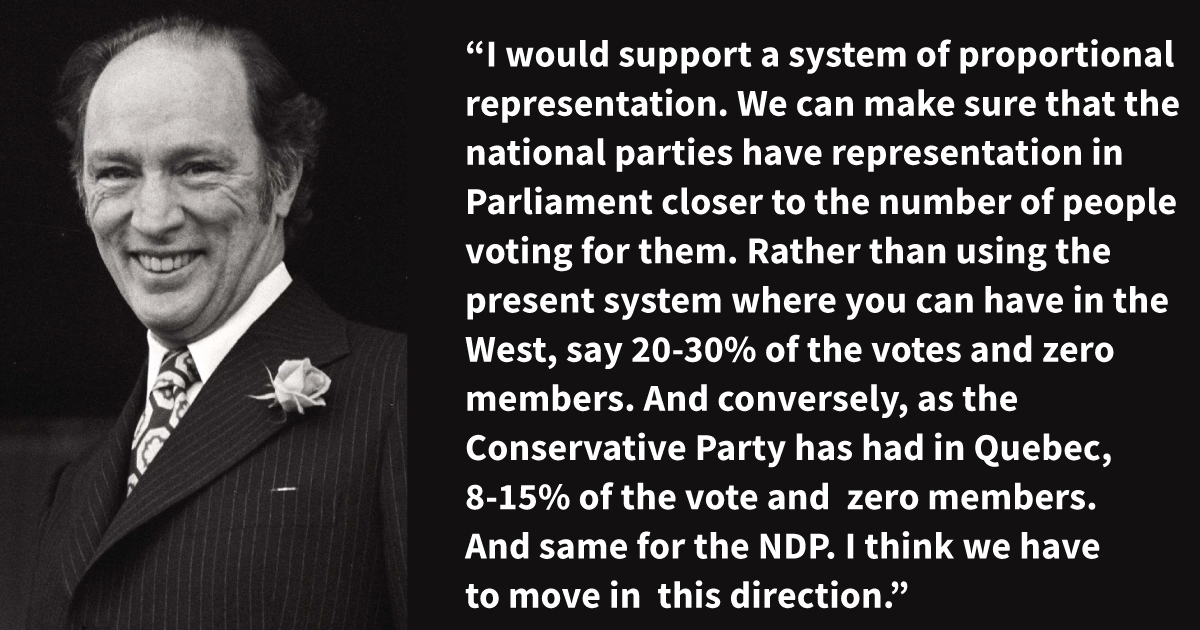 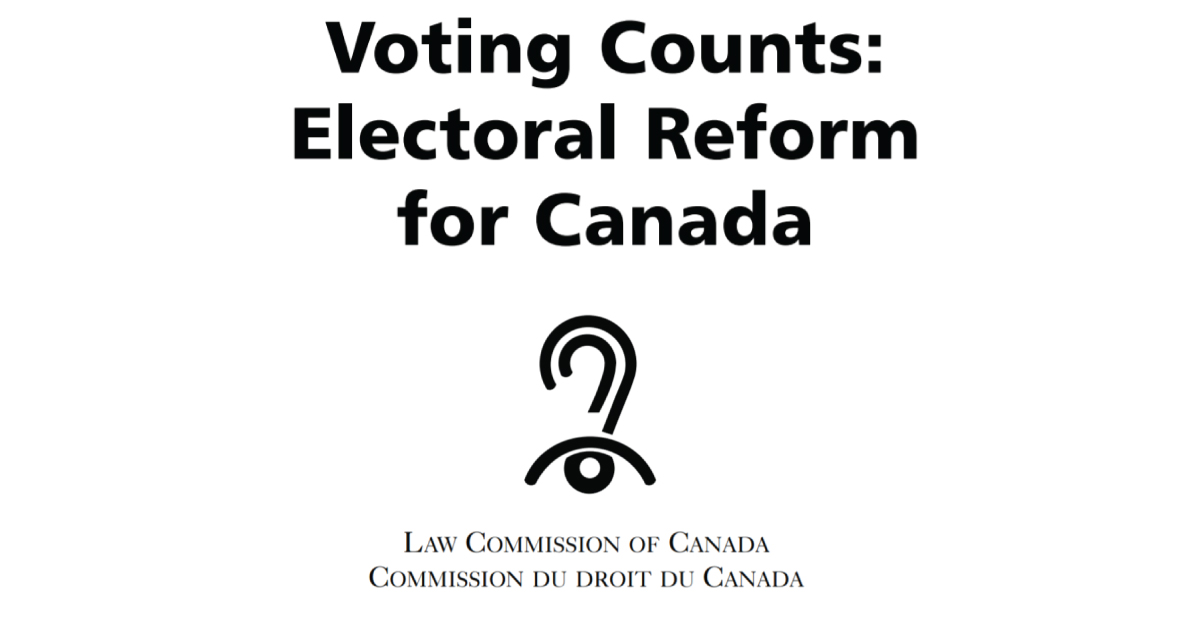 The House of Commons Standing Committee on Procedure and House Affairs tabled a report in June, 2005, recommending a Special Committee on Electoral Reform and a “citizens consultation group” to make recommendations about how to modernize the electoral system. The government response was to agree with the report but say the timelines were unrealistic. Nothing was started before the next election in January, 2006.

During the 2015 election, the Liberals, NDP and Green parties all ran on commitments to make 2015 the last election with first-past-the-post. The NDP and Greens favoured proportional representation.

The headline of the Liberal promise was to “Make Every Vote Count” (a Fair Vote Canada slogan). The only type of systems that aim to make every vote count as a principle are proportional.

Trudeau also promised to listen to expert advice and to introduce legislation for electoral reform at 18 months into the next Parliament.

His promise was repeated about 1800 times. Listen to the platform announcement here: 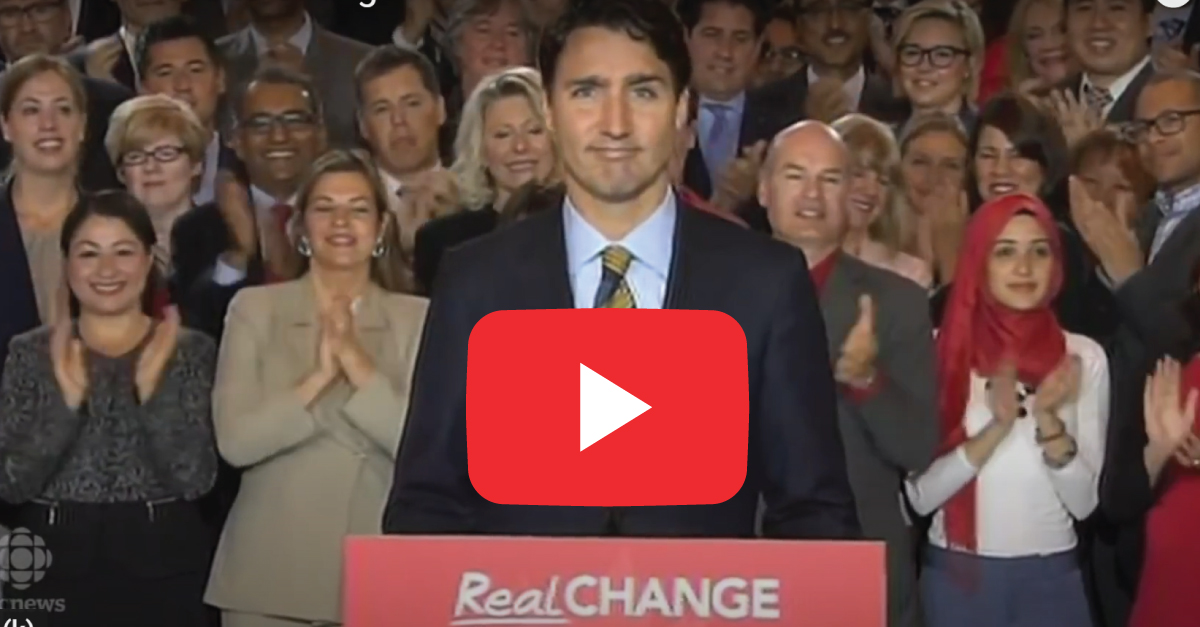 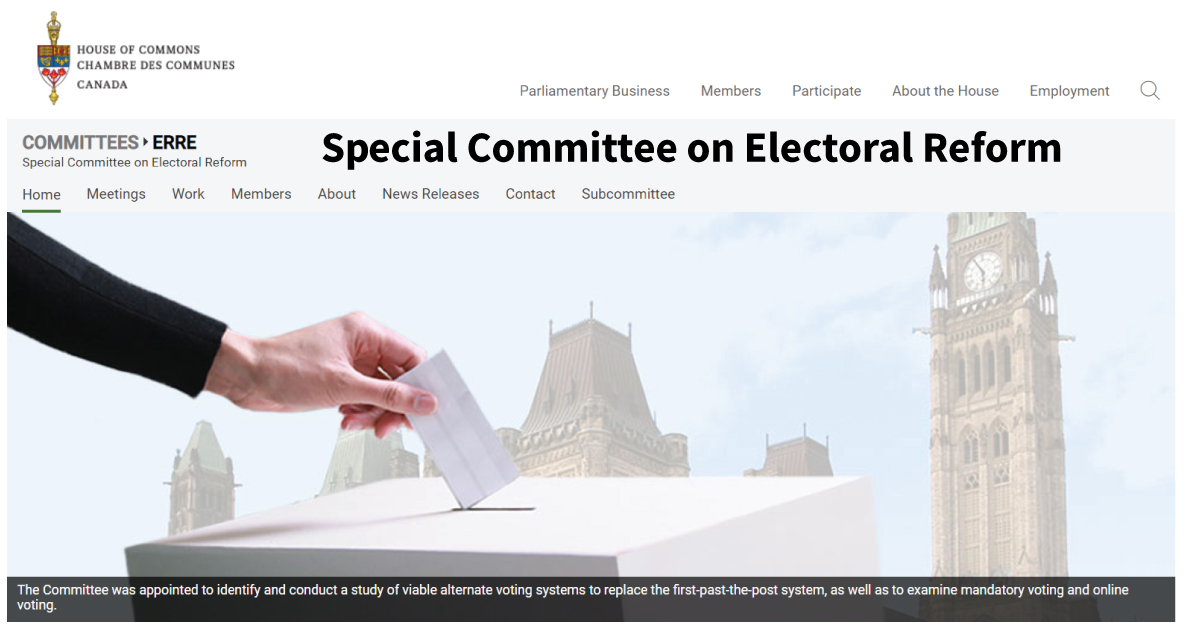 The 2016 Electoral Reform Committee (ERRE) met for five months and heard from Canadian experts and experts from around the world.

The NDP and Green parties wrote a Supplementary Report, in which they expressed support for a range of proportional options supported by the experts that the Liberals might be willing to compromise on, including one based on small, incremental steps and options that could include ranked ballots.

The Conservatives – who have traditionally favoured first-past-the-post – brokered a deal with the NDP and Greens to recommend a referendum, despite 67% of the experts advising against a referendum, and all three non-Conservative parties having deep concerns about it. (You can learn more about the research on referendums on electoral reform here).

When the ERRE report was released, the Liberals held a separate press conference and produced a Supplementary Report recommending the government break its campaign promise, calling it “radical” and “hasty“.

On a more constructive note, they also recommended that:

“the Government further undertake a period of comprehensive and effective citizen engagement before proposing specific changes to the current federal voting system. We believe that this engagement process cannot be effectively completed before 2019.”

In February, 2017, the Liberals announced they were breaking their promise to reform the electoral system.

Politicians at every level unfortunately have been shown to be in a conflict of interest when it comes to electoral reform.

We need an independent, non-partisan process we can trust – led by citizens who will put the interests of citizens first. Around the world, deliberative processes like Citizens’ Assemblies are being used successfully to tackle the most difficult and intractable issues. Fair Vote Canada is calling for a National Citizens’ Assembly on Electoral Reform. Learn more here: 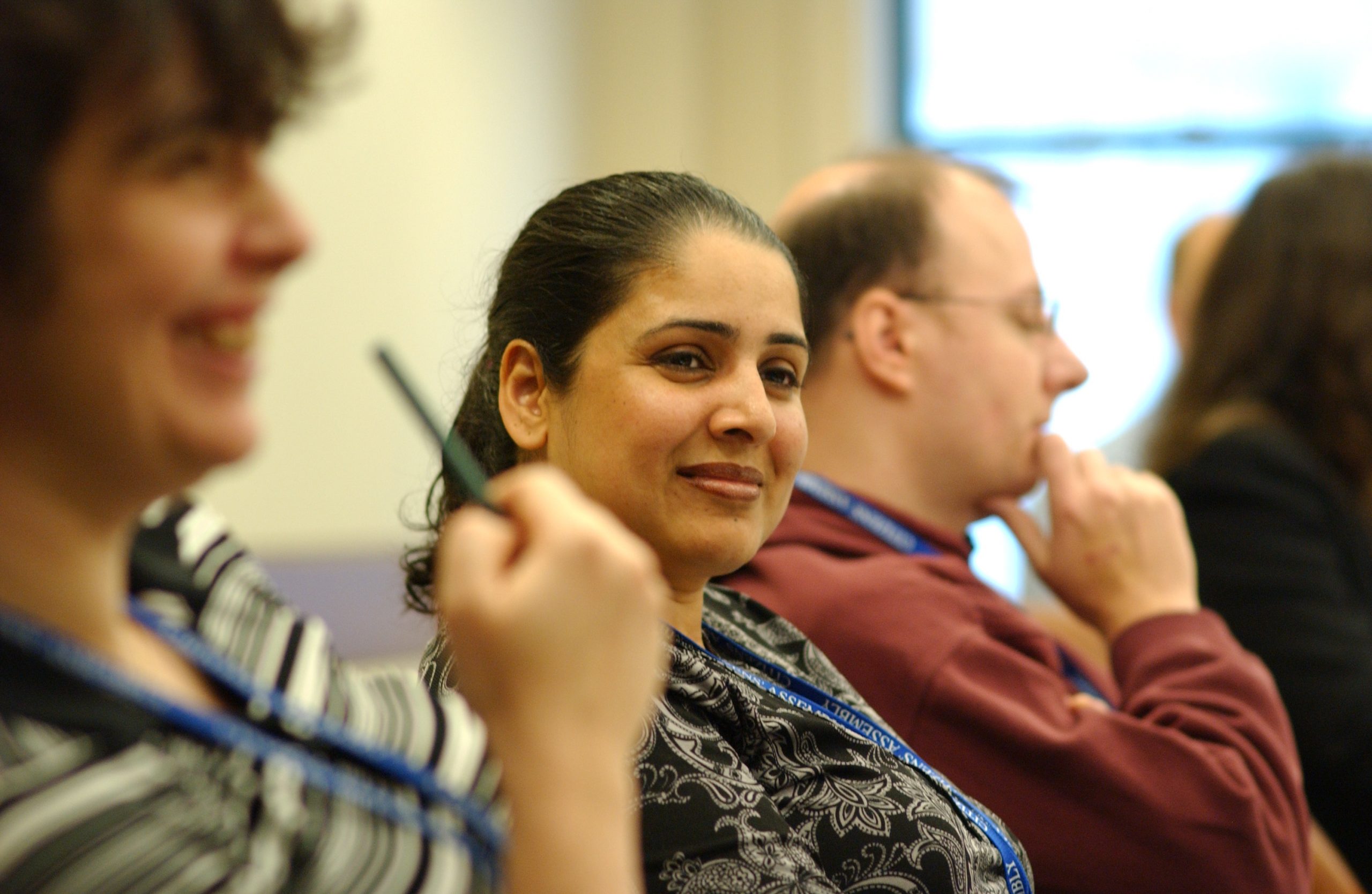