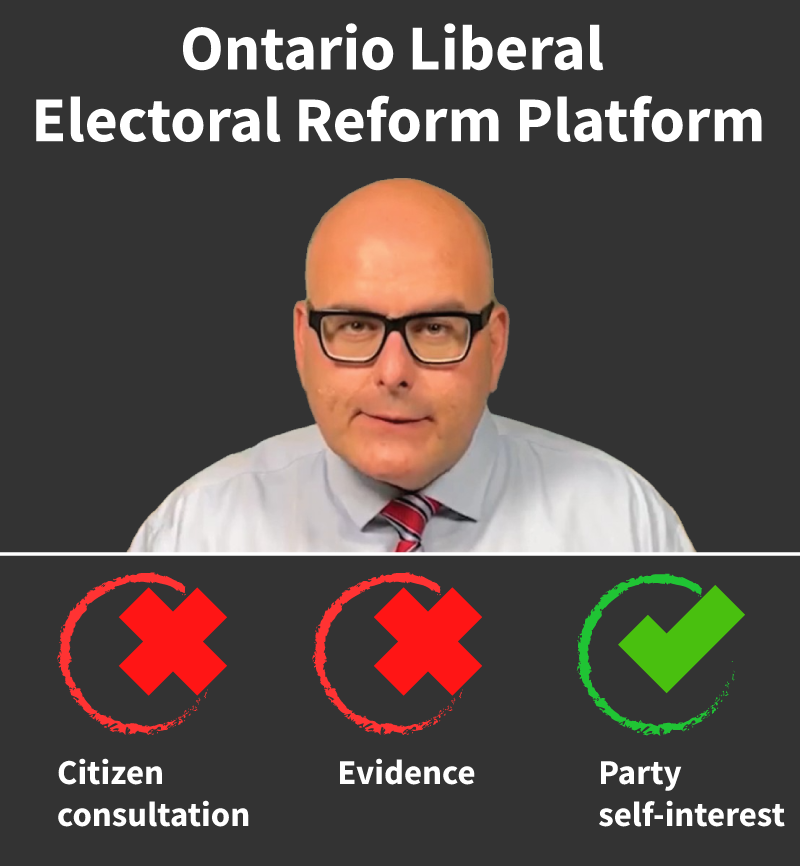 The Ontario Liberal Party’s pledge to ram through winner-take-all ranked ballots* should be slammed by all Ontarians as a self-interested power grab―because that’s exactly what it is.

Ontarians deserve electoral reform that puts evidence―and the interests of all voters―first. That’s not what they’re getting from the Ontario Liberal Party.

The party and its leader have once again put party self-interest first.

Replacing first-past-the-post with another winner-take-all system is a phony reform that solves almost nothing, and could create more problems. During the extensive federal Electoral Reform Committee consultation, only 4% of experts who testified recommended this system. Winner-take-all ranked ballot was widely panned for delivering even worse results than first-past-the-post, while delivering massive seat bonuses to the Liberal Party.

That means more voters shut out, and even more divisive politics.

Have the Liberals learned nothing from the “freedom convoy”? Shutting voters out―and pretending one party can represent everyone―only makes people angrier.

Australia has used ranked ballots for 100 years. Australia’s national elections are plagued by false majority governments and even wrong winner-elections, where one party wins more support but the other party gets all the power.

Here are the results from a recent election in Western Australia: 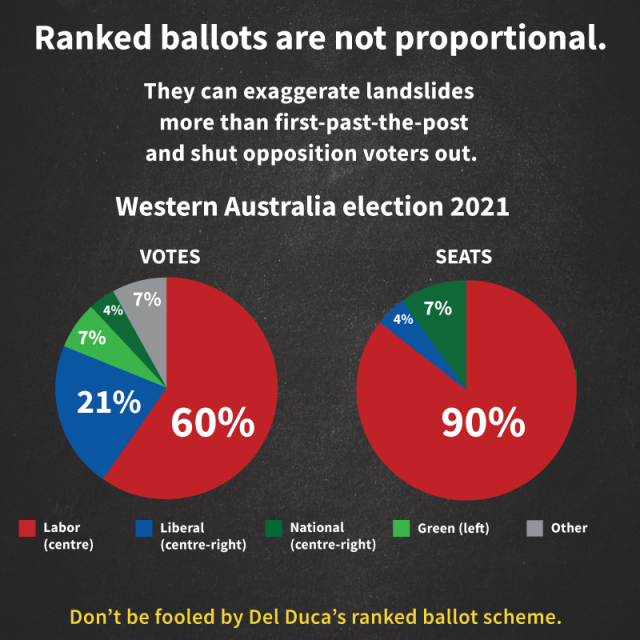 In Australia’s last national election, third parties got 25% of the vote but only 3% of the seats. If we want to move to an even more polarized, two-party system, Del Duca’s winner-take-all ranked ballot plan could take us there.

“Ranked ballots will reward parties that find common ground and that speak to voters’ hopes, not their fears.”

Real world experience shows the opposite. In Australia, winner-take-all ranked ballot has produced a highly adversarial, divisive two-party system. Instead of toning down their venomous political rhetoric, MPs have been kicked out of Parliament hundreds of times in recent years for obnoxious behaviour.

Click the picture below to see some real ads from past Australian election campaigns: 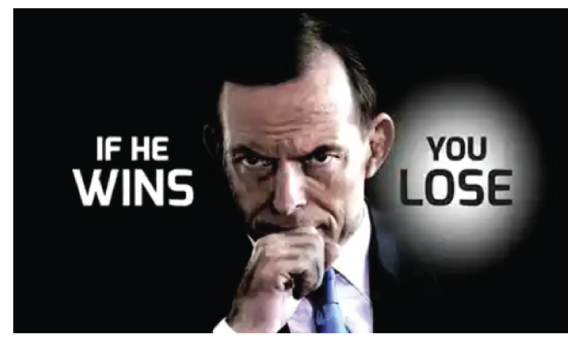 While Steven Del Duca has been selling his winner-take-all ranked ballot plan as a way to produce more collaborative politics (a claim which isn’t supported by facts), the Liberals are now saying they want to hear the opinions of Ontarians and the other parties in a “review”…after the 2026 election. Dreadfully convenient for them.

If the Liberals want an “independent review” of the voting system, now is the time to do it―Ontarians are with them! A majority support an independent Citizens’ Assembly on Electoral Reform: now―not in 2028.

Electoral system change is rare and difficult enough. If the Liberals are not willing to listen to the public and to the feedback from their own consultations now, it’s absurd to think that they would be more open after having experienced the concentrated power of their “ranked ballot”system five or six years from now.

A Citizens’ Assembly… on weekend voting?

The Ontario Liberal Party promises to have a Citizens’ Assembly to “review other potential changes to our elections, such as the voting age, voting on the weekend or expanded advanced voting.”

Ignoring the need for a Citizens’ Assembly on the most pressing issue, where parties have a conflict of interest, and offering to have a Citizens’ Assembly to consider changes like weekend voting shows how little they care about informed decision-making on the issue that matters most.

Ontario’s voting system badly needs an overhaul. All parties need to agree to a non-partisan, independent Citizens’ Assembly on Electoral Reform, because voters rightly do not trust a single political party alone to design a new system

No single party should be able to wield 100% of the power with just 40% of the vote.

However, in a 2021 Leger poll, only 8% thought it was acceptable that a single party force through the system that suits them best.

When the Liberal Party is at its best, it puts people first, and strengthens the fabric of  Confederation with achievements like the Charter, the flag, and the bulk of our social safety net.  At its worst, it confuses party interest with the public interest, and damages the province with its sense of entitlement.  Unfortunately, Del Duca’s call for ranked ballots in single-member districts belongs to the latter category.

Ranked ballots could be part of the solution to Canada’s voting woes, but only if combined either with multimember districts or a mixed-member proportional framework. Only then will the Legislature accurately reflect Ontarians’ true voting intentions.

Fair Vote Canada calls on all parties to put their self-interest aside long enough to listen to the recommendations of informed citizens, through a non-partisan, independent Citizens’ Assembly on Electoral Reform. A Citizens’ Assembly would objectively consider ALL options, including winner-take-all ranked ballot.

If any political party in Ontario is willing to help deliver the transformational change Ontario’s democracy needs by putting voters first, we invite them to step up to the plate now. Ontarians are counting on it.

*Note: “Ranked ballot” as used by the Liberals refers to single-member ridings where winners are elected using a ranked ballot. This system, known as Alternative Vote in Australia, is not proportional. However, ranked ballots can be used―and, indeed, are used―as part of some proportional voting systems, e.g. Single Transferable Vote, or STV. Fair Vote Canada supports the use of ranked ballots within proportional systems.