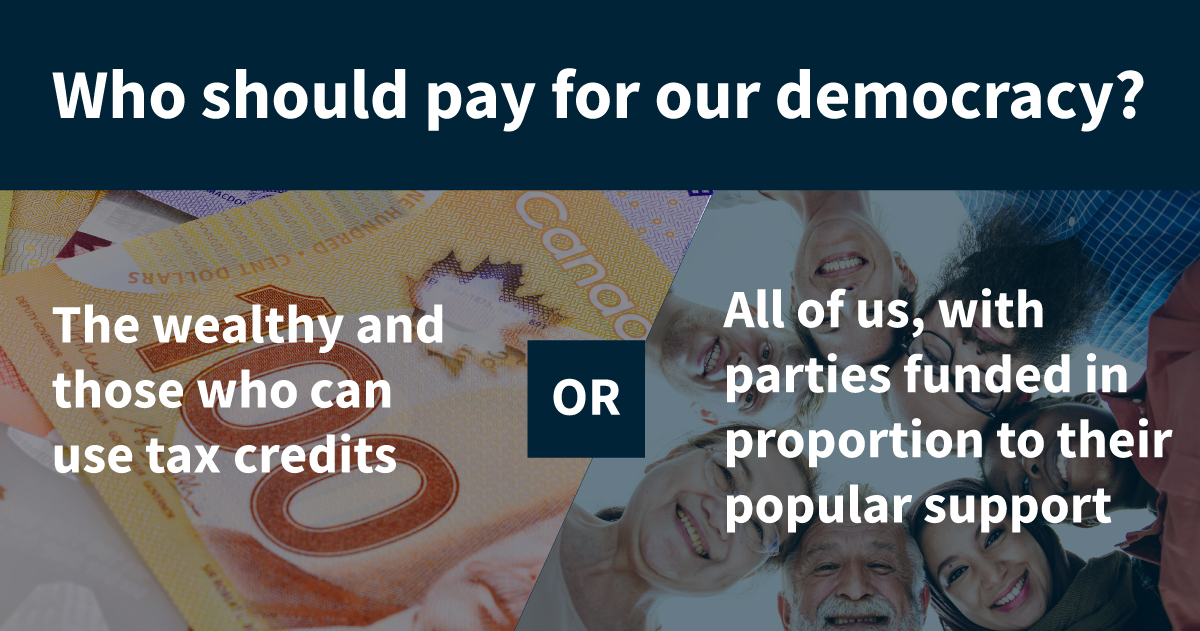 The outrage from some quarters over parties receiving the COVID-19 wage subsidy should be a wake-up call for Canadians: It’s time to fund parties democratically again, not staunch their wounds when they’re bleeding donors.

Love them or hate them, political parties are public entities. The democracy we know would not function without them. Parties raise funds from donors to get their message out⁠—so Canadians know how they propose to deal with the crucial issues facing the country.

The reinstatement of the per-vote subsidy⁠—a modest, predictable and fair source of funding – is the right way to keep the wheels turning. It would avert the need for bailouts in the future. Funding scaled directly to each party’s level of voter support, not donor support.

The subsidy funds political parties fairly by giving them a small amount for each vote they received in the previous election. When Harper scrapped it in 2011, it was against the wishes of every other party⁠—representing the majority of voters.

“The per vote subsidy was a neat form of proportional representation… It was eminently democratic — every vote mattered. Citizens could vote for smaller parties, knowing they might not get power, but that their couple of dollars for each vote represented was going to keep the party functioning.”

This kind of fair, proportional and stable funding stands in stark contrast to the current system, where parties with the wealthiest donors can raise the most money, those donors receive huge tax credits, then parties receive taxpayer-funded reimbursements for spending those highly subsidized donations. In other words, we’re already funding political parties, but in a manner that tilts the playing field in favour of the most well off. Worse, it forces parties to pander from month to month to their base, donors who may not be typical supporters of that party.

The consequences are now staring us in the face: when COVID-19 hit, the public has to foot the bill, paying for a level of staff that was determined by last year’s donors, rather than the level of support they achieved in the last election.

The ability of parties to get their ideas in front of the public so we can hear their ideas and choose between them is an essential service in our democracy.

Restoring the per-vote subsidy would take the financial pressure off parties in a reliable way so they can do what we need them to do now: debate the best path to build the Canada we want after COVID-19.