Teck and White Pines Two Sides of the Same Coin 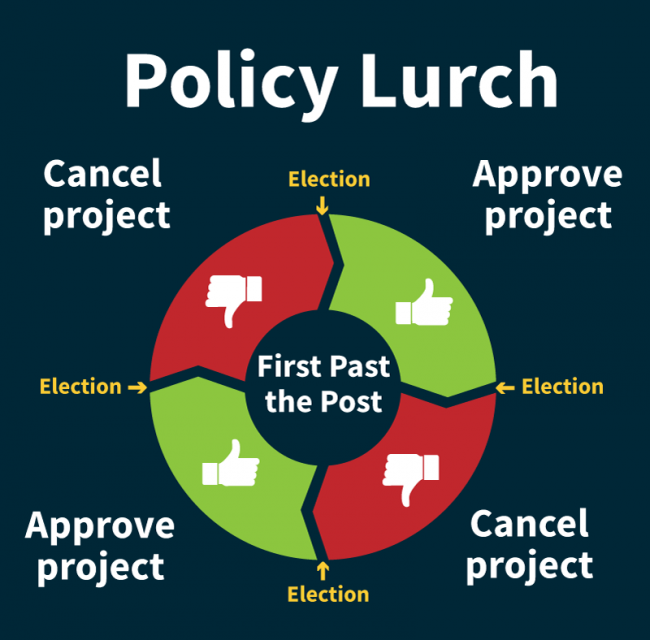 What does the withdrawal of the Frontier oil sands project have in common with the dismantling of Ontario windmills?

Both are victims of an unstable policy climate that ought to give any energy company a reason to think twice. Why would a company invest when today’s environmental regulations could change abruptly in less than four years? This kind of drastic policy lurch as one government is replaced by its opposite — and the uncertainty and instability it creates — is endemic to winner-take-all voting.

The letter from Teck Resources outlining the reasons for the abrupt withdrawal of their application for an oil sands project lays out the uncertainty:

While environmentalists celebrate the Teck decision as a victory in light of the urgent need to act on climate change, the same dynamic is playing out to their detriment in Ontario.

Since Doug Ford’s election to a majority in 2018 with 41% of the vote, Ontario’s PC government has cancelled 758 wind and solar projects, including White Pines Wind Farm, where the windmills literally had to be dismantled and hauled away. The Ford government cancelled rebates for electric vehicles – leading to a successful lawsuit against the government by Tesla. They cancelled funding to plant 50 million trees, leaving nursery owners in the lurch. The federal government stepped in to save the tree planting program for one year, but uncertainty for nurseries continues.

With winner-take-all voting, a small shift in the popular vote can mean a huge swing in power. For businesses whose products or services are supported or opposed by parties of different ideologies, first-past-the-post means the rug could be pulled out from under them because a few voters in a few swing ridings wanted to “throw the bums out.”

Whether you support or oppose any particular project or business, the evidence is clear: the policy lurch of winner-take-all voting systems creates instability.

Companies hoping to invest in Canada’s energy future could be forgiven for wishing they had a crystal ball. The move to proportional representation could be key to a more stable and coherent climate and energy plan across the country–one that is supported by a true majority of Canadians.