How the Grinch Stole Pro Rep 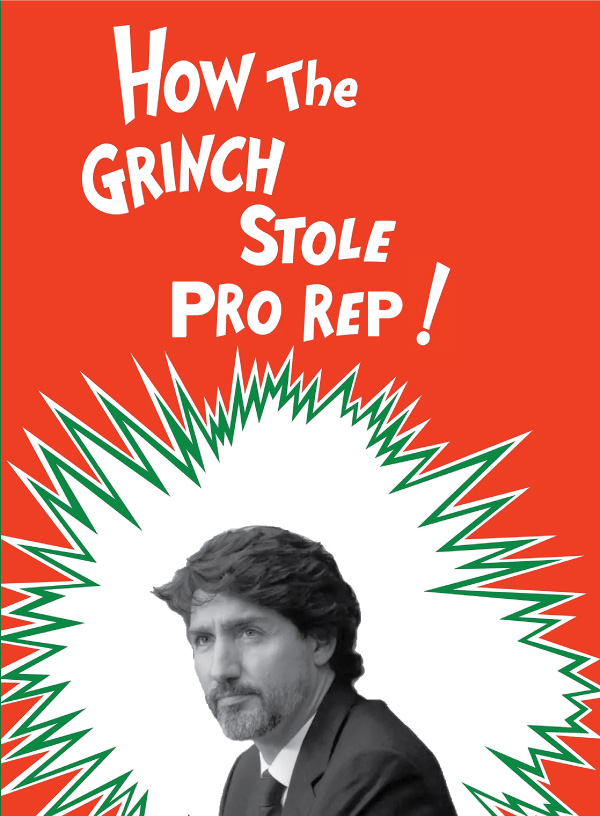 Most voters in Canada liked Pro Rep a lot.
But Trudeau, who lived in Ottawa, did not!

Trudeau hated Pro Rep! Why, you might ask?
It would make 39% majorities a thing of the past

Or it could be, perhaps, that his socks were too tight
It could be he just craved the partisan fight

But, whatever the reason, his heart or just power
He regretted his promise ever more by the hour

Staring down from Sussex Drive with a sour, Grinchy frown
At the warm lighted windows below in their town

For he knew every Canadian, the tall and the small
Was expecting a change from winner-take-all

“When I got elected, I thought the problem was gone!”
But these crazy people think reform is still on!”

Then he growled, with his fingers nervously drumming
“I must find some way to keep Pro Rep from coming!

Soon the whole country will see what the experts have said
Then how will I get Pro Rep out of their head?”

They’ll stand close together, with the “real change” bells ringing
They’ll stand hand-in-hand, and those folks will start singing!

Then he got an idea! An awful idea!
Trudeau got a wonderful, awful idea!

“I know just what to do!” Trudeau thought with a smile
“I’ll blame everyone else – it works once in a while

“Pooh-pooh to the people!” he was grinchily humming
“They’re finding out now that no Pro Rep is coming!

They’re just waking up! I know just what they’ll do!
Their mouths will hang open a minute or two
Then the voters in Canada will all cry boo-hoo!

I’ll tell them, he said, that it’s for their own good
If they thought I was listening…well, they misunderstood

And he did hear a sound rising over the snow
It started in low, then it started to grow

The voters he’d snubbed, the tall and the small
They had not given up – no way, not at all!

And Trudeau, with his socks ice-cold in the snow
Stood puzzling and puzzling. How could it be so?

He puzzled and puzzled till his puzzler was sore.
Then Trudeau thought of something he hadn’t before

And what happened then? Well, in Canada they say
That Trudeau’s heart for the voters grew three sizes that day!

With a smile in his soul, he approached the press mike
An unfulfilled promise, he’d commit to set right

“A Citizens’ Assembly”, said Trudeau, “is just what we need
It’s time for parties to listen, while citizens lead

We can reach a consensus, he said with his flair
My legacy will be: I made voting fair.”