Who craves an early election during a pandemic?

Not the Liberals. Not the Greens. Not the People’s Alliance.

They’ve been scathingly clear: Premier Blaine Higgs can wear this one on his own.

It’s hard to imagine many voters—even PC supporters—wanting to grab their masks and hand sanitizer and run down to the polls. Much less donate to parties and attend political rallies right now. If some voters are baffled or angry at being force-fed an election campaign, who can blame them?

Higgs continues to claim New Brunswick needs “stability” to meet a second wave of COVID-19. But New Brunswick’s minority government has proven amazingly effective on COVID-19 so far. The all-party committee on COVID-19 has produced results that are the envy of most provinces. Since the start of the pandemic, New Brunswick has seen only 186 cases and two deaths. By calling an election, Higgs just dissolved an almost unbeatable team.
a

A quest for stability or a lust for power?
a
In 2018, Blaine Higgs’ PCs got 45% of the seats – with only 31.9% of the popular vote. Such is the funhouse mirror of first-past-the-post. It’s why the big parties love it. First-past-the-post gave Higgs a 13% seat bonus.

Since the pandemic, approval ratings for almost every premier have temporarily shot through the roof. Even leaders of wildly unpopular governments rose to near sainthood overnight.

The website 338 Canada now gives Higgs’ PCs a 99.6% chance of forming a majority government. With 40% of the popular vote.

Absolute power must seem so close that Higgs can almost taste it.
a

According to his letter, he would give all parties input into a legislative plan. In the media, he even offered to give them Ministers. In exchange, they would agree to support budgets for two years, to avoid triggering an election. Or until pandemic was over, whichever came first.

After two days of negotiations, Green leader David Coon said the premier was sincere in trying to do something “creative”.

Unfortunately, the chance for an agreement hit the dumpster in record time.

Higgs’ ultimatum to make a deal in three days or face an early election came across, to Liberal leader Vickers, like “a gun to the head”.  Vickers walked out, accusing Higgs of a “power grab.”

In countries with proportional representation, written power-sharing agreements form the basis of stable and effective governments. Parties make detailed, long-term plans together, based on shared goals. Cooperation like this produces better outcomes, from environmental protection to economic prosperity.

But deals of this sort need time and sincerity on the part of everyone to negotiate.

With first-past-the-post, the longing to “roll the dice” instead was apparently irresistible. And the finger-pointing in all directions, built into our winner-take-all voting system, helped sink what could have been an historic deal.
a

It’s past time for proportional representation in New Brunswick

a
In 2003, the New Brunswick Commission on Legislative Democracy recommended proportional representation for New Brunswick. This Commission was set up under PC Premier Bernard Lord.

Proportional representation means if a party gets 30% of the vote, they get about 30% of the seats.

Proportional representation would have sucked the life out of these tiresome political games before they even started. Nobody’s getting a majority with 40%—ever. So the government can take its eyes off the polls for a while and get on with the job of governing.

Today, one could be forgiven for remembering 2011, when Stephen Harper called an election asking voters to transform his minority government into a “strong, stable majority” Only 39% of the vote handed him just that.

Was that the governance most people wanted?

Blaine Higgs thinks the same system and the same tired tropes will pay off for him, even if that’s not what the majority want. Could he be right? 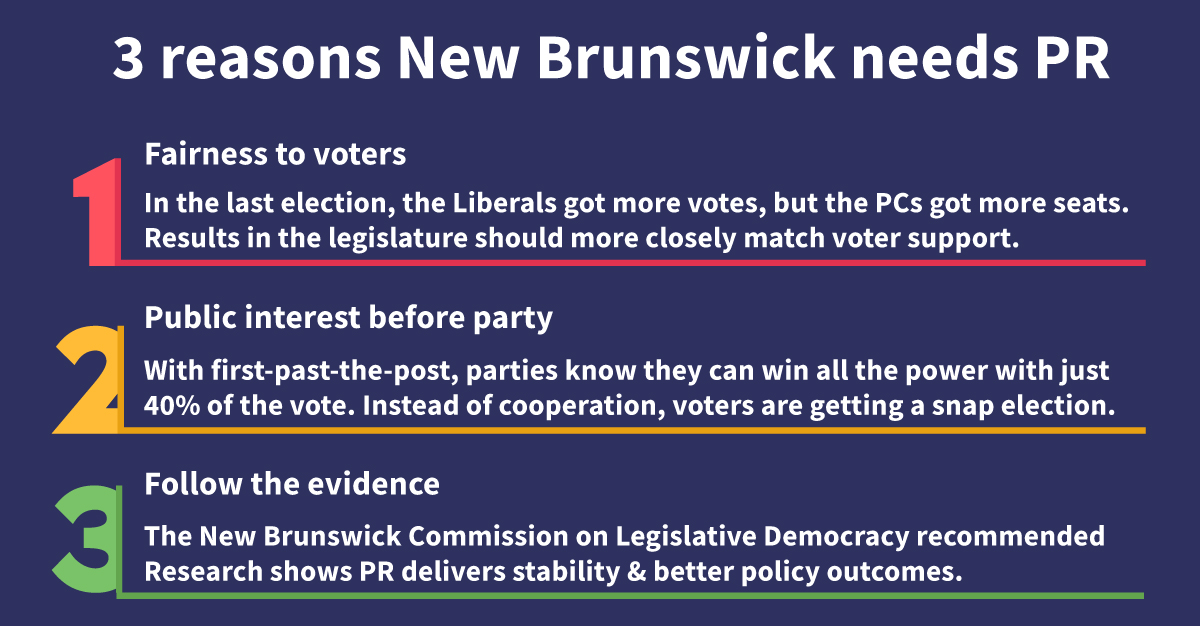