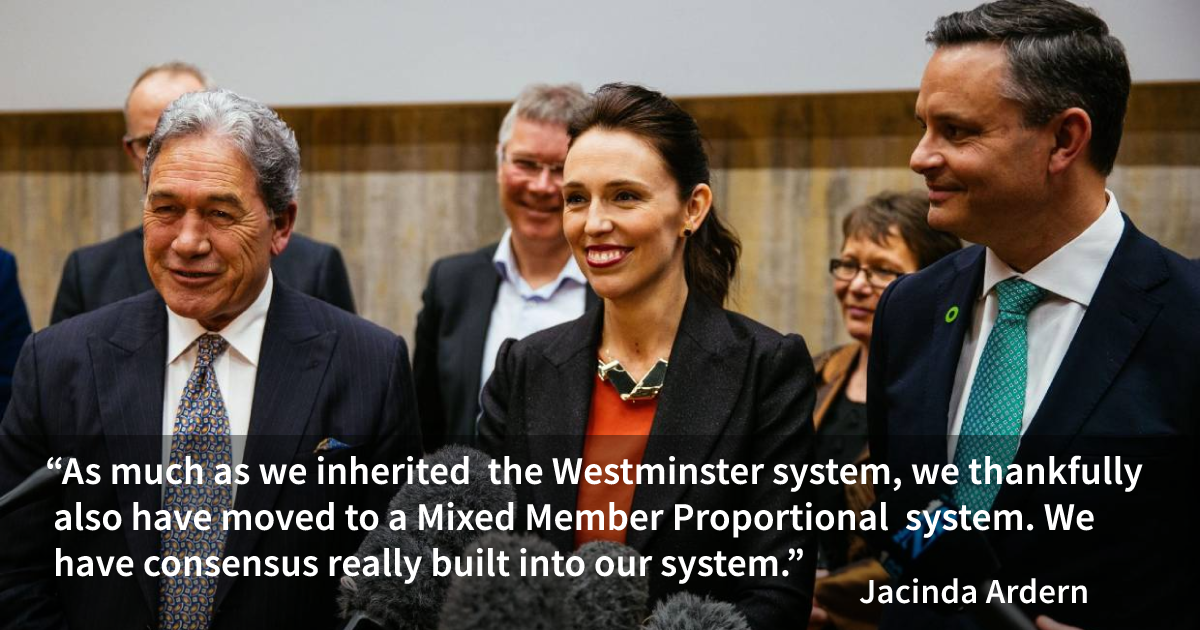 In 1996, New Zealand adopted proportional representation, after 100 years of first-past-the-post.

For most of those 100 years, New Zealand functioned as a two party system, with the flaws of winner-take-all voting on full display: Every election from 1960 to 1993 was a false majority government.

Two elections in a row were “wrong winner” elections, where the party that formed a majority government actually earned less of the popular vote than the party which formed the opposition. These injustices fueled support for reform.

Since adopting proportional representation the two major parties (Labour and National) continue to dominate politics, but four to six parties regularly win seats and at least two parties must work together to pass legislation.

New Zealand’s Prime Minister, Jacinda Ardern, became world famous for her kindness and exceptional leadership in response to a mass shooting in New Zealand last year — the polar opposite of Donald Trump.

Less well-known outside of NZ is that the government Ardern leads is a coalition. In the last NZ election, Jacinda Ardern’s Labour Party received 37% of the popular vote. They went on to form government in partnership with the New Zealand First party, which received 7% of the vote. The Green Party, which received 6.3% of the vote, has a supply and confidence agreement with Labour.

All three parties have Ministers and effectively work together like a majority coalition.

Why does this matter? Simply, because when COVID-19 hit, over half of the NZ MPs — from three different parties in Parliament — were already on Jacinda’s team.  The parties didn’t need to negotiate if and how to work together on policy — they were already doing it.

Without wasting time, the government took the additional step of expanding its coalition into an all-party response, moving closer to the “grand coalitions” seen in Germany or the UK all-party effort led by Winston Churchill during WW2.

An all-party committee — led by the opposition party, National — was formed to oversee the government’s response to COVID-19.

This meant that instead of forcing opposition parties to react to already-crafted government legislation, their concerns and ideas were heard up front, resulting in better decisions the first time around. This approach saved time — which likely saved lives.

New Zealand began testing on January 22, over a month before their first confirmed case. Instead of a harm reduction (“suppression”) strategy, the Prime Minister was clear that New Zealand’s goal was to eliminate COVID-19 from New Zealand.

New Zealand moved rapidly through an alert system of increasing restrictions, announcing a Level 4 (almost total) lockdown on March 23, when NZ had only 102 confirmed cases, and zero deaths. Wage subsidies were rolled out weeks ago, and by April 6, 41% of NZ’s workforce had received the subsidy. A rent increase freeze and ban on evictions for unpaid rent was put in place immediately. A deal was negotiated with banks for a payment holiday on the principle and interest on mortgages for six months.

As of April 13, there were 1349 cases in New Zealand, five deaths, and a rapidly declining curve.

Just as important,  the government is already planning ahead to help society prepare for a less restrictive form of lockdown.

Every country is experiencing unique challenges and inherent advantages in responding to COVID-19. No doubt New Zealand’s highly effective response was aided by being an island country.

But NZ’s success is also due, at least in part, to an efficient, collaborative effort by all parties. Research shows that cooperative governments save lives.

What lies ahead in the coming weeks and months with COVID-19 is hard to predict. But one thing is certain: In New Zealand, political parties will tackle the effort together. 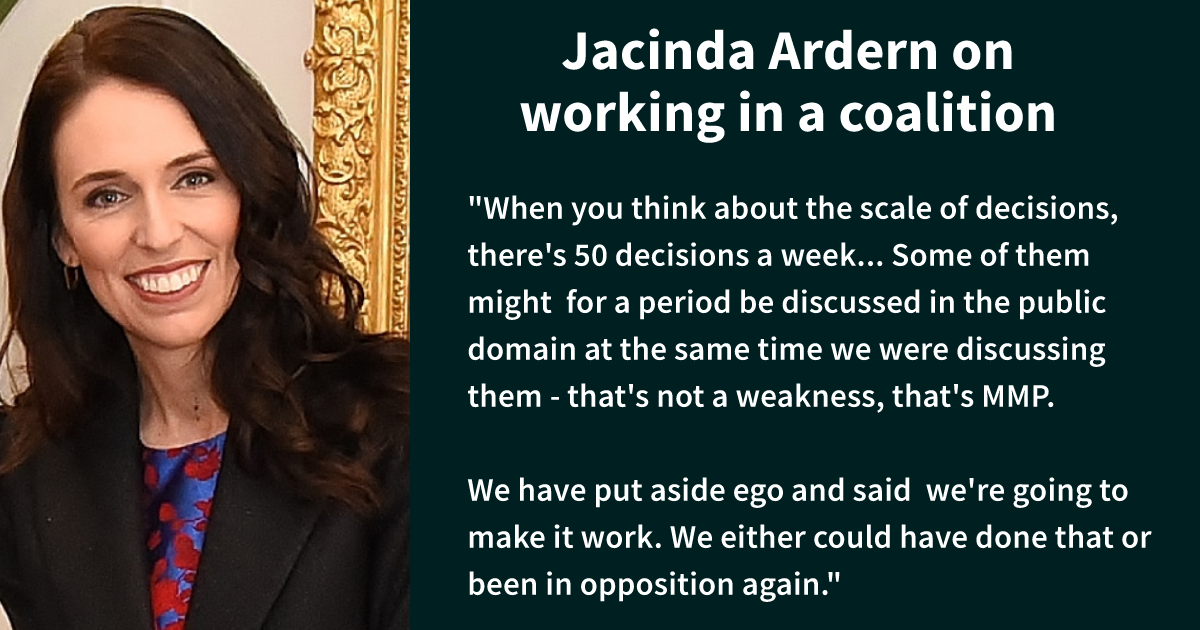 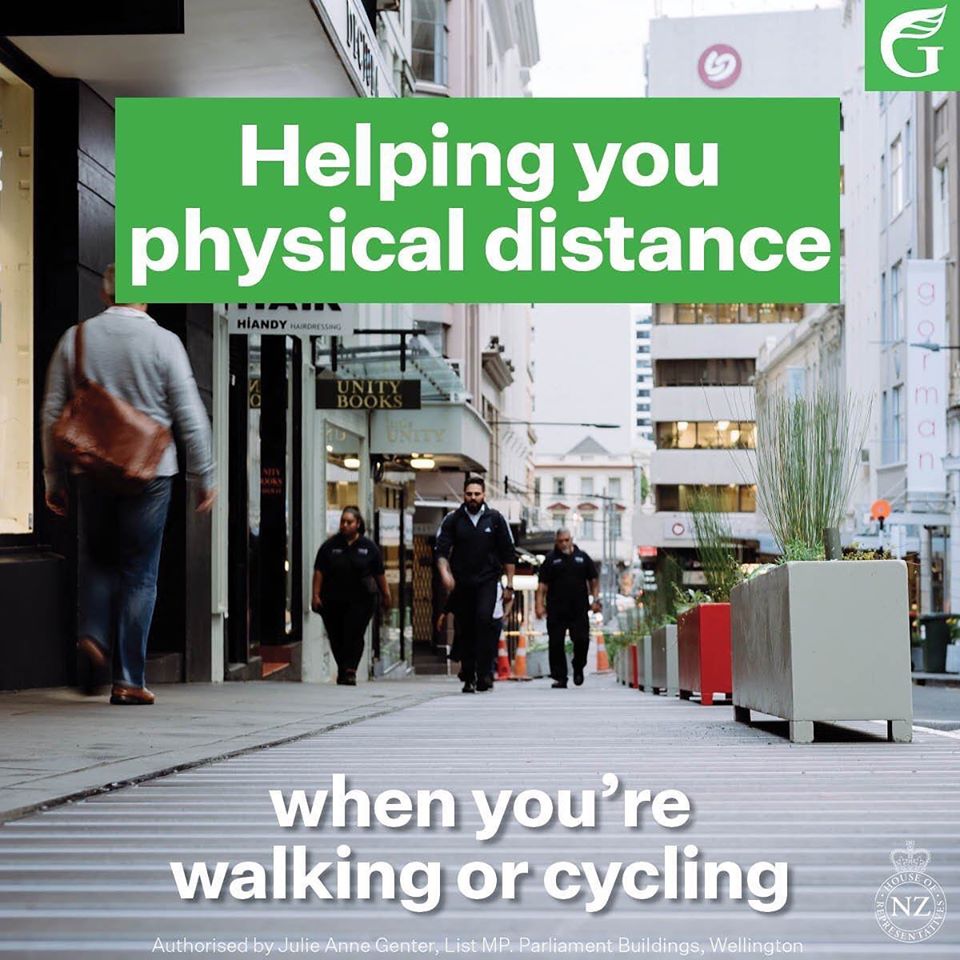