Fair Vote Canada applauds the commitment of Jody Wilson-Raybould and Jane Philpott, running as independents, to champion electoral reform in the 2019 federal election.

“Both Philpott and Wilson-Raybould have reiterated what so many Canadians already know, but it takes courage to say,” said Fair Vote Canada’s President, Réal Lavergne. “That the system is broken.”

Wilson-Raybould has long supported proportional representation. During the 2015 election campaign, she responded personally to Fair Vote Canada, committing to be an advocate for PR to better reflect the diversity of Canada in the House of Commons. In her letter to Liberal MPs, Jody Wilson-Raybould reminded her colleagues of the promise of “real change” they campaigned on, “a transformation in our political culture” — including proportional representation. Today she reaffirmed those values:

“I heard that we need to do politics differently. That partisanship is trumping principle. That exclusion is trumping inclusion, and that the lack of diversity of voices was simply unacceptable and there is too much power in the centre.”

“When the challenges we have to meet are collective ones, we need to respond through shared and joint efforts that use the distinct talents, ideas and expertise we all have to offer. And in this reality there is less room for overt partisanship in our evolving democracy.”

“A lot of people in our riding were very disappointed about not going forward with democratic reform.”

You want politicians who will treat each other with respect. Who will collaborate and work together across party lines…  We want to solve problems across election cycles so we don’t have one party bringing in a whole range of initiatives and as soon as the election happens the next guy will “tear it all down” and waste a lot of time and money in the process.”

If we can build those solutions together across party lines and say that this work is going to outlive this government, it’s going to be bought into by people across the political spectrum then we can really get stuff done.

We’ve got work to do on democratic reform in this country because I have learned in the last few months more than I ever knew in my life about the fact that the system is broken. We need to find a way that every voice when they go to the ballot box will know that their vote counts, that they will be well represented in Parliament.”

Democratic reform is the second of her top ten issues on her new campaign website.

“Fair Vote Canada particularly wants to commend Philpott for identifying a serious flaw of all winner-take-all voting systems: policy lurch,” says Fair Vote Canada’s President, Réal Lavergne. “We cannot tackle long term challenges effectively if a one-party government, elected with only 39% support, can effectively scrap progress and reverse major policies. We see this today in Ontario, and in Alberta. Only proportional representation, by requiring cooperation to make policy, will break this cycle.” 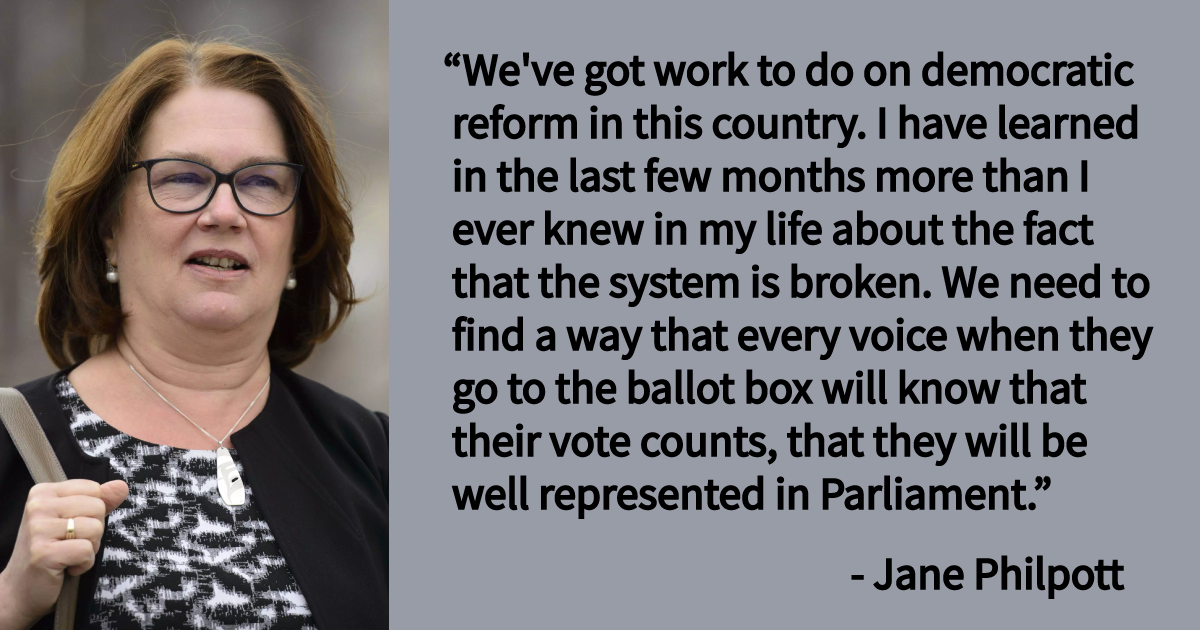