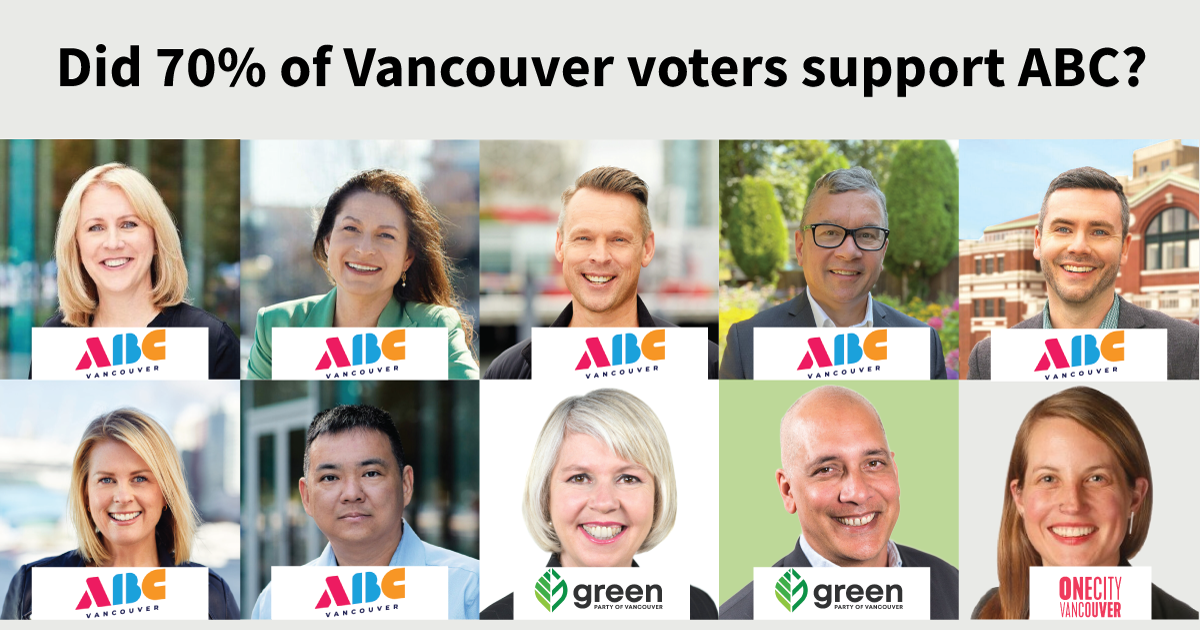 With winner-take-all bloc voting, ABC Vancouver has been handed 70% of the seats on Vancouver Council―but did 70% of Vancouver voters intend to hand a single party control of every decision for the city? The short answer is “No.”

As political scientist Stewart Prest pointed out, “The rest of the population—and there’s a significant portion of the population that did not vote for ABC—they are left with very little to show for their votes.”

Voters for the Affordable Housing Coalition, COPE, Forward, NPA, Progress, Vision and Team, as well as Independent candidates, received 44% of the vote but were totally shut out.

The problems with winner-take-all voting are not unique to Vancouver. In Surrey, for example, a party with 25% of the vote got 50% of the seats.

Proportional representation systems ensure that almost every vote counts and produce councils that better reflect communities. Such systems are already used to elect all local councils in Scotland and Ireland, and some cities in New Zealand, with more adopting PR every few years.

In 2017, Vancouver’s Independent Election Task Force was convened by Vancouver City Council to address the critical issues of public confidence and voter engagement, including increasing turnout. The Task Force recommended proportional representation for Vancouver, with the model to be chosen by a Vancouver Citizens’ Assembly and implemented by 2022. Clearly, that didn’t happen.

In this election, turnout in Metro Vancouver fell from 39% to 31%.

Cities deserve the right to choose their own voting systems, a power that can only be granted by the provincial government.

A request by Vancouver City council to the province for Local Choice has been met with silence.

‘It’s clear that our voting system exaggerates the popularity of some parties, and dismisses others,” says Fair Vote Vancouver organizer Ryan Campbell. “It’s imperative that the Province act on Vancouver’s request to allow cities to choose a voting system that more accurately reflects voter intent.”

When will the BC NDP grant cities Local Choice?