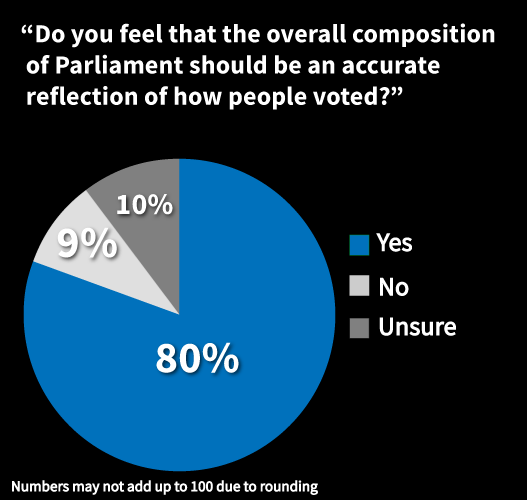 Angus Reid Global, in partnership with Fair Vote Canada, has conducted a survey of 1,510 Canadians on electoral reform.

When Justin Trudeau broke his election promise to end first-past-the-post and make every vote,  he claimed that “there is no consensus” and that “only a few people” want proportional representation.” Clearly, that is not the case.

“With our current voting system, the last two majority governments were elected with about 39.5% of the popular vote.” How strongly do you agree or disagree with the following?

“In order for a political party to form a majority government, it should have the support of over 50% of Canadians”

82% of respondents agreed with this statement.

90% of respondents agreed with this statement.

“Do you feel that the overall composition of Parliament should be an accurate reflection of how people voted?”

77% of respondents said that they support moving towards a system of proportional representation. This included 80% of those who voted Liberal in the last federal election and 65% of those who voted Conservative. At least 69% across all age groups and provinces expressed support.

“Which of the following statements best reflects your opinion on electoral reform and the Liberal government’s handling of it?”

70% of respondents said that the Liberal government was wrong not to pursue electoral reform. This included 61% of Liberal voters, 66% of Conservative voters and 83 to 85 % of NDP, Bloc Québécois or Green voters.

“When Canadians are asked about proportional representation, there is clearly a high level of support in having the results of our elections dictate the composition of our parliament”, said Demetre Eliopoulos, Managing Director of Public Affairs at Angus Reid Global. “This support is seen across all party lines and in every region of Canada.”

“Today’s poll offers proof, once again, that Trudeau is indulging in wishful thinking,” says Fair Vote Canada’s Executive Director, Anita Nickerson. “It shows that the appetite for fair representation in Canada is stronger than ever.”

The Liberal Party’s 2015 platform specifically mentioned proportional representation as an option. The party pledged to listen to Canadians and experts.

Fully 88% of the experts who testified to the federal electoral reform committee recommended proportional representation, and 87% of the citizens who testified recommended PR. The government’s own online survey of 360,000 Canadians showed that 70% preferred that parties share power and share accountability.

Sharon Sommerville, an organizer for the strategic voting campaign in 2015 to elect a Liberal in her riding, told us she can’t count the number of times she heard at the door, “I’m just doing this once because I’ll never have to do it again.” This election, she’s organizing to help elect an MP whom voters can trust on proportional representation.

Fair Vote Canada is encouraging all Canadians to send a strong message to all the parties this election on electoral reform, with emphasis on 20 swing ridings where voters have the best chance of electing an MP who will champion PR.

In partnership with Fair Vote Canada, Angus Reid Global conducted an online survey among a representative sample of 1510 adult Canadians. The respondents are members of Angus Reid Forum. For comparison purposes only, this sample plan would carry a margin of error of +/- 2.5 percentage points, 19 times out of 20. 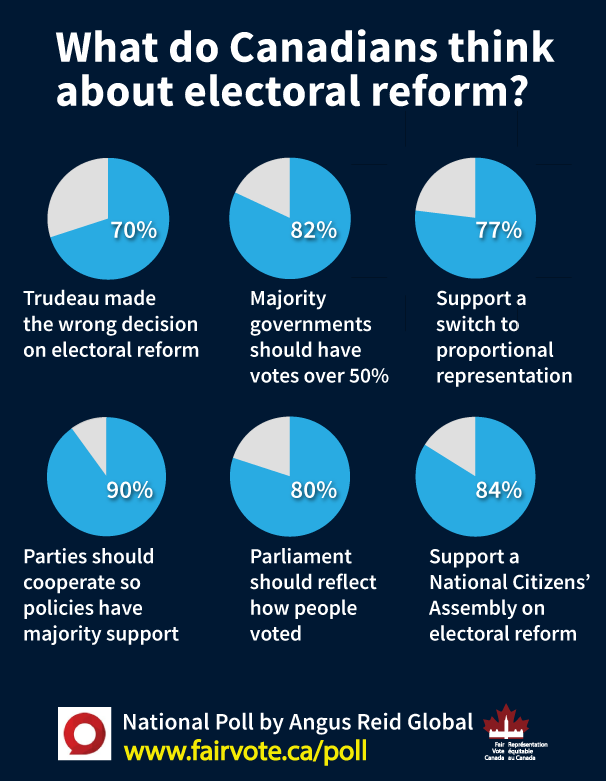