Jody Wilson Raybould and the politics of first-past-the-post

What do these three recent scandals have in common?

All three situations occurred under a single party majority government.

In BC, the Clerk was appointed by the governing BC Liberals – and his deep ties to that party were an open secret. It is also alleged that BC Liberal Party strategists were meeting with him to try to prevent the scandal from being exposed.

If the Liberal majority government hadn’t been replaced by a minority, would these allegations ever have come to light?

In PEI, one of whistleblowers described the contracts to government friends this way: “It was like a feeding trough,and only certain people were invited to the trough.”

Federally, if Wilson Raybould was pressured to give SNC Lavalin a sweetheart deal, who was in the rooms when that happened – except Liberal Ministers and strategists?

With first-past-the-post, 39% of the popular vote got the federal Liberals 54% of the seats – meaning no-one else needed to be in the room when those conversations happened.

Now that the allegations against the Prime Minister’s Office are in the open, how can they be investigated?

How proportional representation makes a difference

With two or more parties governing together, it’s harder to make secret decisions that benefit only one party and its friends and donors.

A Cabinet in a country using proportional representation with a coalition government is composed of Ministers from more than one party. 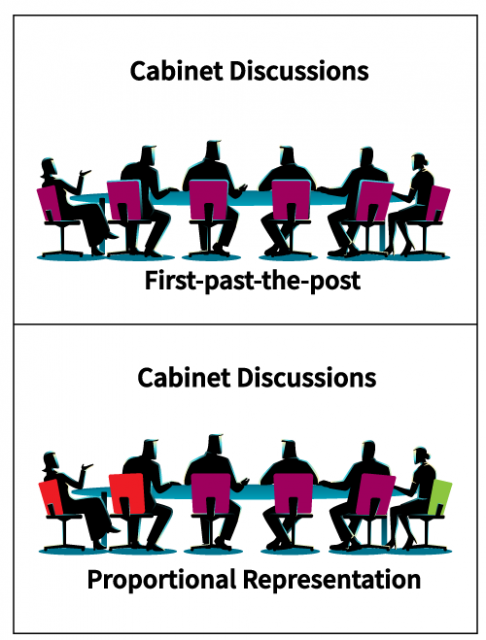 In Germany and the Netherlands, the Minister of Justice is even from a different party than the Prime Minister. Makes for a very different conversation.

Imagine being a corporate lobbyist in a country with proportional representation who wants a lucrative contract – or legislation written to suit a corporate client. Lobbyists have to convince not just one party – but two or three. This is what researcher Salomon Orellana means when he says proportional representation better “contains elite extraction” –  limiting the degree to which powerful economic interests can influence policy to their advantage at the expense of the common good

When the Liberal government received the results of their online survey in 2016 – Mydemocracy.ca – they didn’t publicize most of the results. Asked four different ways, respondents overwhelming supported shared decision making and shared accountability – the kind of governance Canadians would get with proportional representation. (SEE PICTURE BELOW).

Using World Governance Indicators and Transparency International’s Corruption Perception Index, Lijphart found that PR countries outperformed winner-take-all ones on 16 out of 17 measures of sound government and decision making – nine of them at a statistically significant level – including government effectiveness (quality and independence of the public service, quality of policy making), rule of law, and the level and control of corruption (including capture of the state by elite interests).

Cooperation and power-sharing may not be easy for parties, but when it comes to accountability, more eyes on what’s going on protects citizens better than any empty promise later to “clean house” ever will. 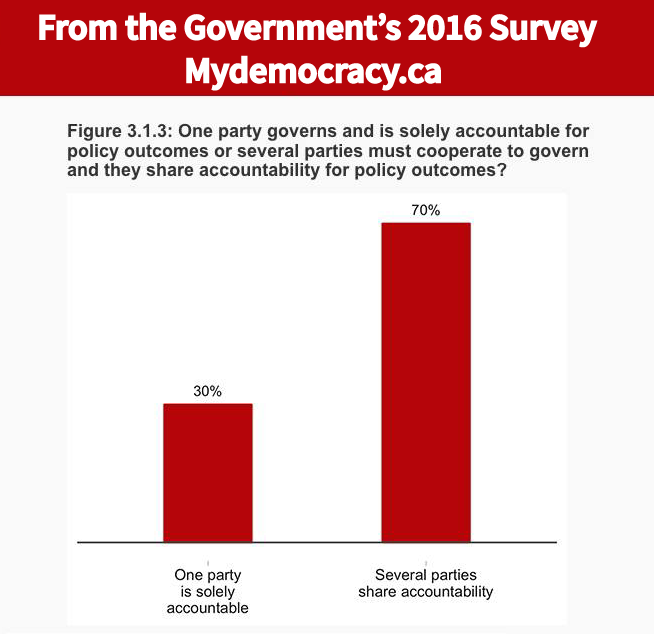