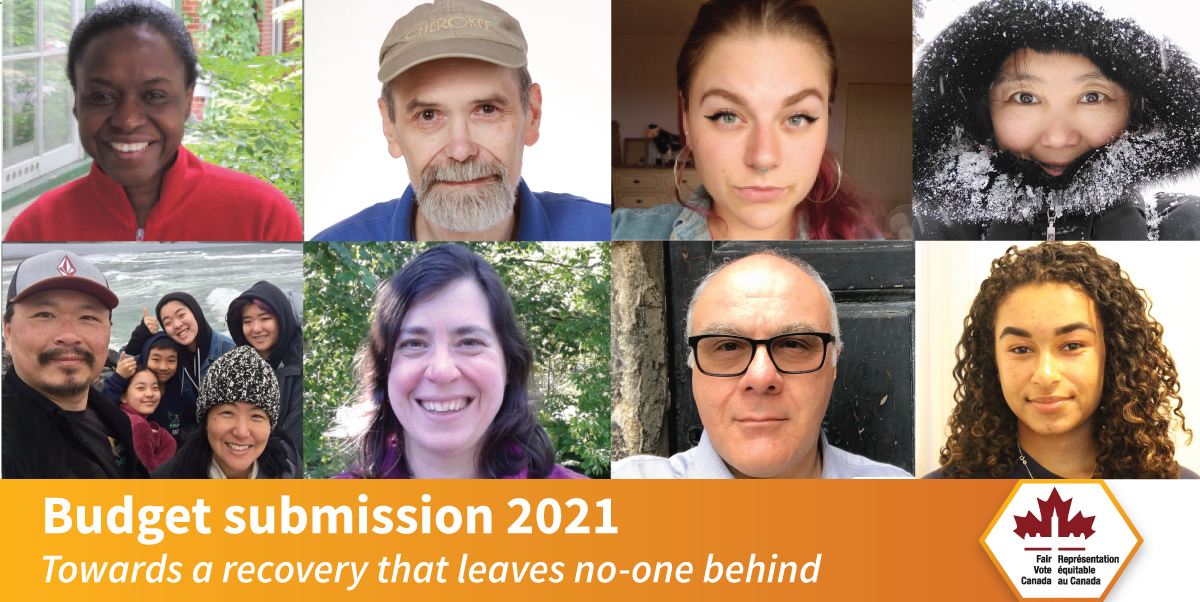 Click the picture to read a graphic version of our submission.

The way to lock in progress is through democratic reform

Although health and economic concerns are top of mind for Canadians as we seek to manage the COVID pandemic and its economic aftermath, we are also aware of longer term challenges. The climate crisis is one of these. The other concerns the quality of our democracy.

As we look elsewhere in the world, we see that democracy is or has been under threat in many places, not least just south of the border, but elsewhere as well.

Yet the best managed countries by far, not just in managing the COVID crisis, but across the board, have been countries with the most robust, most proportional forms of democracy. Canadians have greatly appreciated the collaborative spirit that has accompanied collective efforts to manage the pandemic, and would like to see more of that going forward.

This raises some fundamental questions about how to make our democracy more representative of voters’ wishes and more collaborative than we have seen under the hyper-partisan electoral system that is our first-past-the-post system.

In September of 2020, Fair Vote Canada commissioned a Léger poll that confirmed the extraordinary public support for action on the quality of our democracy. Asked specifically about this issue in the context of the pandemic, 93% of respondents considered that improving our democracy was an important or very important condition for achieving lasting changes for the better.

At a time when measures to combat the economic fallout of the pandemic are costing us in the hundreds of billions of dollars, it is worth noting that measures to improve our democracy would be virtually costless by comparison. The reason our country has not made any progress in reforming our electoral system is not the cost, but the lack of political will by politicians elected according to the current voting system.

What Fair Vote Canada is calling for, therefore, is to hand this issue to Canadians themselves, to study the options and recommend reforms that citizens themselves would like to see.

Fair Vote Canada has called upon the government to convene a citizens’ assembly on electoral reform and commit to act on the recommendations of that assembly. That was a little over a year ago. At this stage, we would like to see the cost of a citizens’ assembly built into the upcoming budget as a sign that the government would like to hear from citizens on this file, in a deliberative and representative way.

We believe that this is the only way that a meaningful consensus will be found on how to fundamentally improve the quality of our democratic representation in Canada.

Practically speaking, a citizens’ assembly should be a non-partisan affair. We recommend that the idea be studied by the Parliamentary Standing Committee on Procedure and House Affairs (PROC), and that it should involve all of the political parties currently represented in Parliament to develop consensus-based terms of reference and an action plan allowing the assembly to begin its work in the near future.