Are MPs “appointed” to seats from party lists?

Claim: “Jean Chretien railed against efforts to replace Canada’s current electoral system with proportional representation, calling it a way for “apparatchiks” to “enter Parliament through the back door.” – National Post, June 2018

“When you vote for a political party you are giving over your authority to that political party to appoint people to the legislature.” – BC NO side spokesperson Suzanne Anton, Global News

These claims about proportional representation in Canada are false.

With the proportional systems recommended for Canada, no MPs are “appointed” by parties – period. All MPs are selected by voters.

Opponents like to claim that “MPs will be appointed from party lists”.

A word about “party lists”

Imagine you go the grocery store to pick up some juice, but find there is only one kind of juice on the shelf.

Essentially, this is first-past-the-post. Each party produces a candidate “list” for us already – but it’s one person long.

If you don’t find that individual candidate inspiring or trustworthy – too bad. There’s no choice for voters WITHIN each party.

In some proportional representation systems, more choice can mean that parties offer voters a list of candidates. Voters can choose from among individual candidates from the list.

To read more about party lists in detail within different proportional systems, see below.

With Mixed Member Proportional, you vote for your local MP like you do now – using first past the post. About 60% of the seats are filled this way.

Then you select an individual regional candidate from a list prepared by the party. This design is called an “Open List”.

In an Open List system, the order of the candidates on the list makes no difference. The seats are filled by candidates who were the most popular with voters, but did not win a local seat.

See below for an example of an Mixed Member Proportional ballot – with open lists. Note you vote directly for candidates. Learn more about MMP here. 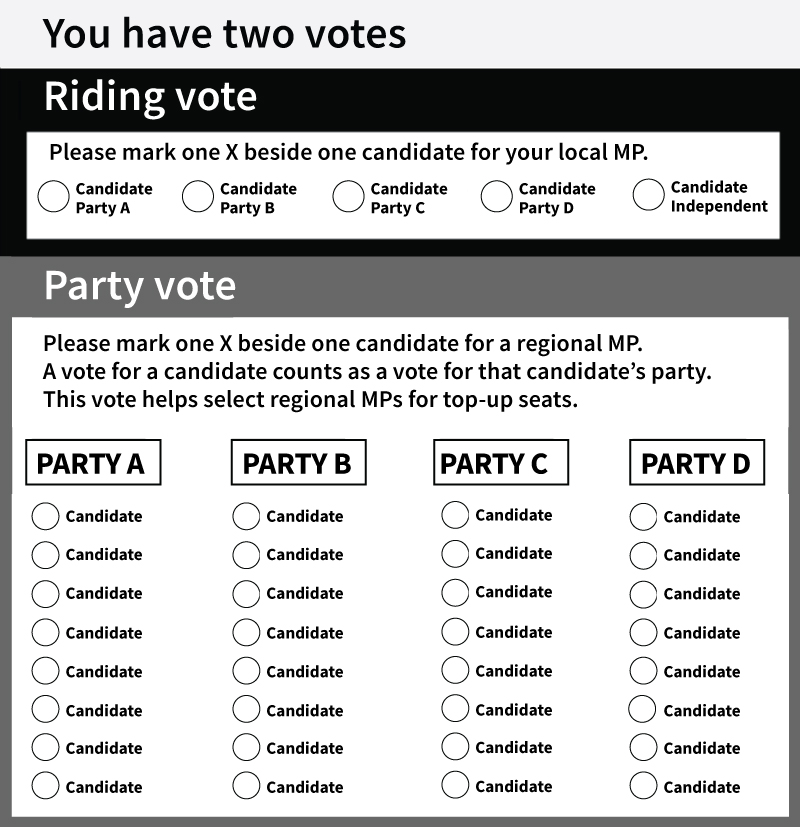 Single Transferable Vote offers more voter choice without the use of party lists. It is a candidate-based system, although the party affiliation of the candidates are clearly identified.

MPs are elected in local districts. Each district elects a team of local MPs.

PR-STV is the proportional system that offers voters the most choice. You rank your candidates in order of preference, as few or as many as you like. You can rank cross party lines. The most popular candidates win the seats.

See below for an example of an STV ballot. Obviously, there are no “appointed MPs” here either. To learn more about STV, go here.