What about “fringe parties”?

Claim: “But proportional representation systems allow parties with extreme positions of the right or the left to be elected with a tiny percentage of votes – and then use that validity, legitimacy and platform to further their cause”.

Stated by: Bill Tieleman in No to PR press release and BC Liberal website

NOTE: For the claims about “extremist” parties, see here.

a
The claim that parties with a “tiny” percentage of the vote will be elected is mostly false in the context of the proportional systems recommended for Canada.

Proportional systems usually have a threshold of support a party must meet to win seats. 4-5% is common.

For example, in the recent BC referendum the Attorney General’s report guaranteed a 5% threshold that a party must reach before being able to elect MLAs to proportional seats. 5% is a the threshold used in Germany and New Zealand. Those countries have no more parties elected than Canada.

In addition, the way proportional systems for Canada would likely be designed – with results being proportional on a regional basis, or within a small multi-member district – means there will be a limited number of seats to fill in each region/district. The threshold to win a seat in many regions/districts would be higher than 5% by the design of the system. If a region elects 8 members, a party may need about 12% of the vote to be guaranteed a seat.

In Canada’s last few federal elections, all 15-20 “fringe” parties put together didn’t get 1% of the vote.

How Many Parties Can We Expect with PR models for Canada?
a

As you can see in the image below, places which use proportional systems similar to what has been recommended for Canada do not have a significantly more parties with seats than Canada does. (Note: In 2011 and 2015, Canada had 7 parties with seats in our Parliament. We haven’t had a two party system since 1921).

Proportional representation in general is associated with a modest increase in the number of parties represented in legislatures. PR undeniably makes it easier for voters for smaller parties to achieve representation.

Lijphart’s (1994) comparison of advanced industrialized democracies in 1945-90 found the “effective number of parliamentary parties” (ENPP) –  which takes account not only of the number of parties but also the relative size of each – was 2.0 in plurality systems (first-past-the-post), 2.8 in majority systems (like Alternative Vote/Run-Off) and 3.6 in proportional systems.

Norris (1997) looking at elections in the 1990’s found that the effective number of parliamentary parties was 3.1 in majoritarian systems (first-past-the-post and Alternative Vote), 3.9 in mixed or semi-proportional systems, and 4.0 in proportional systems.

However, the number of parties depends on the political culture, the particular election, and the design of the system.

No-one has proposed a pure “List PR” system for Canada with a low threshold – the type of proportional system that would be most likely to facilitate many more parties. 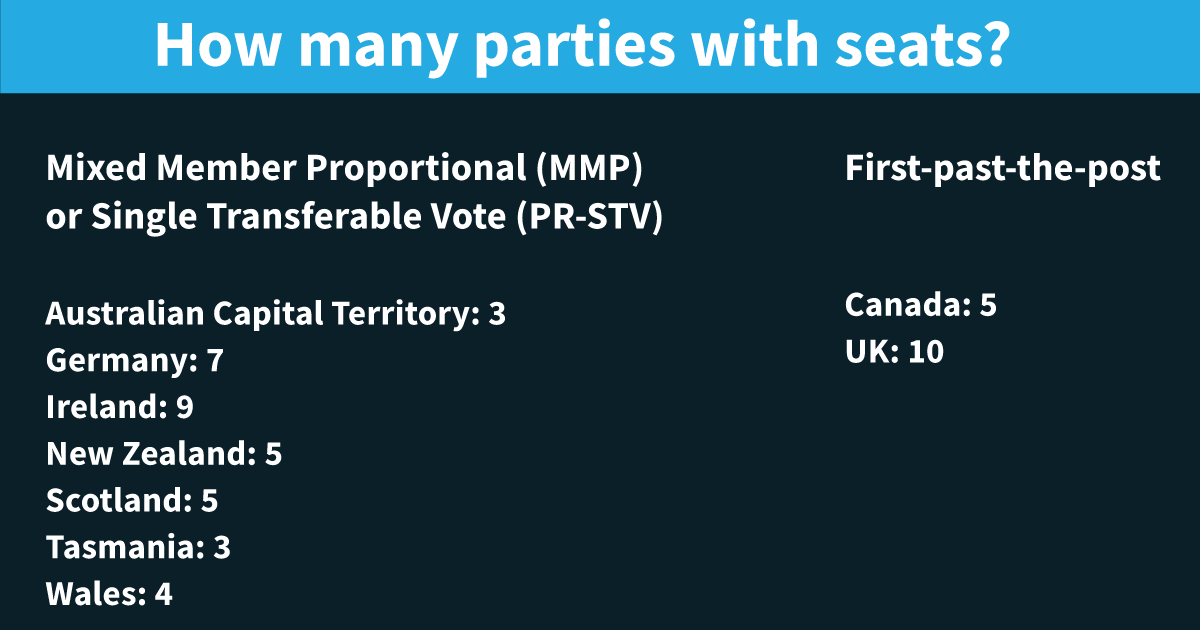 Do any of the proportional systems Fair Vote Canada endorses make it even possible for a party with less than 5% support in a province win a single seat?

There are no list seats. There is no party-based threshold to apply. The most popular individual candidates in a local area are elected.

In a 5 seat local district, a popular local candidate would be guaranteed one of the local seats with about 17% of the vote.

Obviously, this is a strong level of local voter support. It would not be considered “fringe” by voters in that district!

In Ireland, which uses PR-STV, representatives from a few small parties (such as “People Before Profit”) have a seat in their legislature because their popular local representative was elected by voters in a particular district.

Ireland is unique in that their elections are more locally-focused than most countries with proportional representation. Ireland also elects many independent representatives who are well known and popular with local voters.

Tasmania and Malta, by contrast, which also use PR-STV, have no representatives from small parties or independents. Only two or three parties win seats in their legislature.

A countries’ political culture – in other words, what voters want – plays a large role in the outcome.