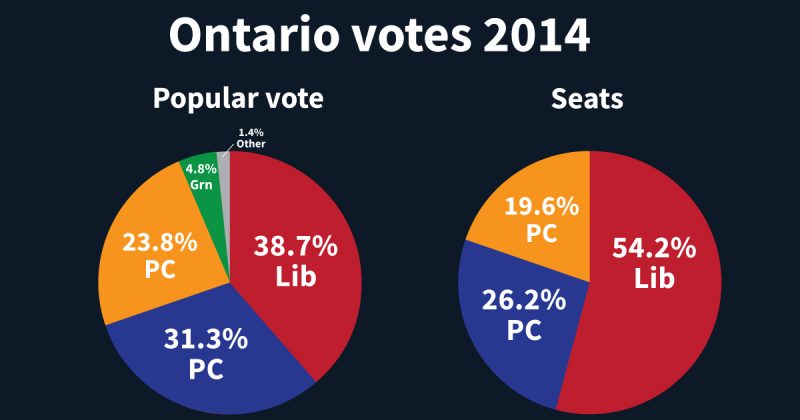 Ontario’s voting system took only 38 per cent of the votes to manufacture a majority for Kathleen Wynne’s Liberals.

“Ontarians did not vote for a Liberal majority, but the voting system gave them one anyway,” says Doug Bailie, president of Fair Vote Canada. “It’s a distortion of the voters’ wishes.”

The Liberals increased their share of the popular vote by only one per cent over what they won in the 2011 election, but that was enough to give them a majority because the PC vote dropped sharply.

“In a democracy, governments should have a mandate from the majority of voters. How are voters supposed to hold the government accountable when they’re elected with less than 40 per cent of the vote?” says Bailie.

“We’ve seen a lot of negative campaigning in this election, driven by the logic of the voting system,” says Kelly Carmichael, FVC’s executive director. “Candidates and parties were aiming their message at that narrow slice of voters they needed to win, rather than trying to build a broad consensus on the province’s future.”

“Proportional representation ensures each party’s share of the seats reflects its share of the popular vote,” says Carmichael. “With that kind of voting system, successful political leaders are the ones who seek consensus and are ready to share power with other leaders.”

Fair Vote Canada is a grassroots organization representing over 34,000 Canadians calling for equal and effective votes for all citizens through the use of proportional representation.