It was Justin Trudeau’s way or ‘No Way.’

Voters understand that changing the electoral system was never a run-of-the-mill issue. When more than 50% of voters sit on the sidelines in any given election, while one party with a false majority is handed 100% of the power over all the decisions affecting our lives, electoral reform becomes a primary issue underlying all others. 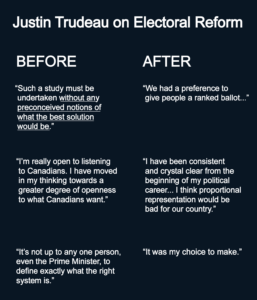 Yesterday, Justin Trudeau revealed in a press conference that he had abandoned electoral reform because there was no support for his preferred option of adding a ranked ballot to our existing system.

“We had a preference” he said. By this he seems to mean that he, himself, preferred a ranked ballot. It is the royal “we,” so eloquently evoked in his choice of words in Iqaluit, when he took responsibility for the decision to abandon electoral reform, saying, “It was my choice to make.”

Tellingly, the five Liberal MPs on the special committee wrote a minority report that made no mention of a preference for a ranked ballot. In fact, they said “nobody wants the ranked ballot.”

“I commend the Prime Minister for coming clean on his reasons for abandoning his promise on electoral reform,” says Réal Lavergne, Fair Vote Canada’s President, “although most people had figured this out by now. However, it is a sad statement on the process that led us to this point. The Liberal promise was that they would consider all of the options based on the evidence. Voters took that at face value, and for the government to turn away from the evidence because it does not support what the Prime Minister wanted to hear makes a mockery of our democratic process. This is the sort of thing that undermines people’s trust in government and could have repercussions in 2019.”

Fair Vote Canada chapter leader Ann Remnant puts it more bluntly: “Whatever your view is on electoral reform in Canada, the bigger issue is that a silver tongued Justin Trudeau who asked for our trust, who promised us a government that would listen to Canadians, who promised an end to draconian austere governance, has just twisted the knife. That he betrayed us on Feb 1 by dropping his oft-repeated promise to end FPTP and make every vote count is still unbelievable. That he broke his promise, offering up weak excuses which neither he nor the Liberal MPs believed, not to mention the thousands of engaged Cdns, is insulting. That he now admits to us that he never intended to go forward with any system other than his favorite is numbing. How can you stand bald-faced in front of millions of people who trusted you and say it was all a ruse, a nice little game you call open and transparent government? You may feel better after your little confession, but I am piping angry.”

Immediately after the 2015 election, over 9000 Fair Vote Canada supporters sent Justin Trudeau a letter asking for a process we could trust. Citizens told him we were tired of committees that were mere dog & pony shows designed to justify preconceived policy choices.

“But that is exactly what we got after wasting 4.1 million dollars on an exercise of bait and switch,” states Kelly Carmichael, Fair Vote Canada’s Executive Director. “When Justin Trudeau exposed the fact that he killed the promise because he wasn’t going to get a ranked ballot (single-winner preferential ballot) , he reduced the ERRE to a dog & pony show. More importantly, he exposed the Liberal brand of politics as vapid and self-interested. I think that’s the part I find so disheartening: the entitlement, hubris and basic disregard for Canadians. Also revealing was his comment that implied he favours using artificial means to concentrate diversity in one party, rather than letting diversity find power through multiple parties.”

Larry Gordon, FVC’s former Executive Director hits the head on the nail when he states “The electoral reform issue is a litmus test for parties and politicians. If they believe in representative democracy, they support proportional voting systems, where all voters have votes of equal value and true parliamentary representation. If they believe in gaming the system for partisan advantage, they support other voting systems that sort voters into those who win representation and those who are denied representation. The PM makes it crystal clear where he stands.”

* Policy Resolution 31, which formed the basis of the Liberal Party’s campaign platform on democratic reform includes the following explanation on the Liberal Party website: “(*) The democratic reform agenda described in this resolution represents a compilation of ideas developed by the Leader and the Caucus over the past year. Canadians want their Members of Parliament to be effective voices for their communities in Ottawa, and not merely mouthpieces in their communities for an all-too-powerful Prime Minister. Our goal must be greater transparency, accountability and participation in Canada’s political system, and fewer abuses which undermine the confidence of citizens and voters in the quality of their democracy.”