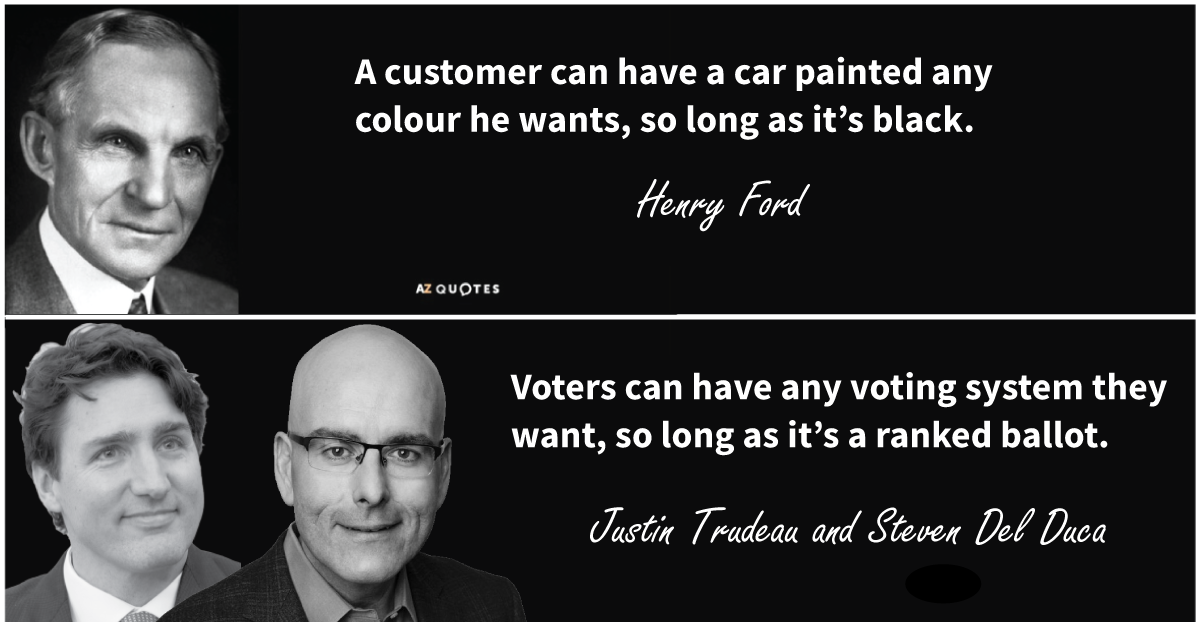 Del Duca is pledging to force through the only voting system that experts show could deliver worse results – less proportional results – than first-past-the-post.

A winner-take-all system that will concentrate power at the top even more.

A “reform” that could lock us into a two-party system for decades to come.

Is first-past-the-post on steroids the kind of “reform” we want forced through?

It’s easy to see the appeal of the Alternative Vote for the Liberal Party.

Expert simulations of recent federal elections (and many elections before that) show that Alternative Vote would have given the Liberals a huge seat bonus—and massive false majorities—without any more public support. 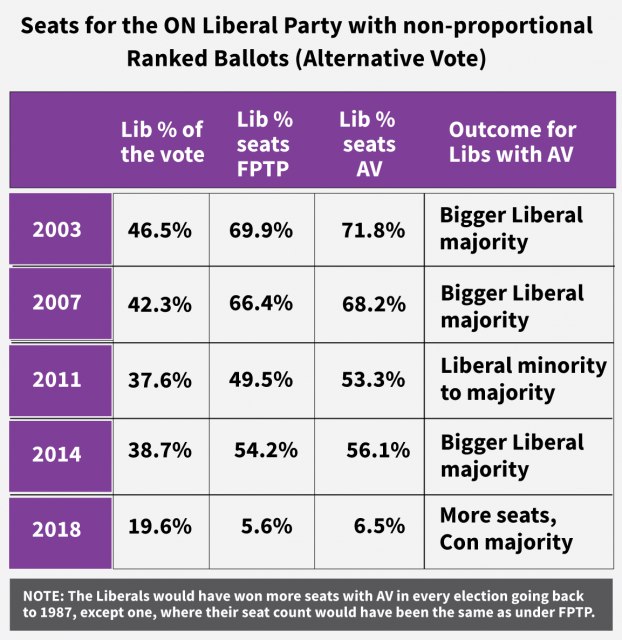 88% of the experts who testified to the federal Electoral Reform Committee recommended proportional representation. Only 4% supported winner-take-all ranked ballot – fewer than supported first-past-the-post.

Even Justin Trudeau eventually had to concede that his scheme had failed:

Del Duca claims that with Alternative Vote, “it won’t make sense for leaders and parties to demonize one another.”

Here’s how experts from Australia describe the effect of the Alternative Vote on their politics:

“Alternative Vote is unique amongst ordinal voting systems in that it supports and perhaps encourages hostility between the largest parties thus contributing to Australia‘s harsh political culture.”

The scale of the dishonest attack ads by parties has reached such a feverish pitch that 84% of Australians now support legislation for truth in political advertising.

After the election, Alternative Vote produces a Parliament characterized by grueling partisanship.

Over a period of just two years, the Speaker of the House had to eject MPs from the Chamber for bad behaviour 400 times – three times per day!

“Blood sports” is how Professor Mark Evans of the University of Canberra Institute for Governance and Public Analysis describes Australia’s politics.

Is this really the “electoral reform” citizens are looking for?

Del Duca and the Ontario Liberals are COUNTING on public confusion and deliberate misinformation to deliver them the non-proportional voting system they believe will work for their party.

Steven Del Duca’s and Justin Trudeau’s single-minded fixation on a winner-take-all ranked ballot—and blindness to the evidence—is EXACTLY why we need an independent, non-partisan Citizens’ Assembly on Electoral Reform. To get this out of the hands of politicians, and into process we can trust.

Del Duca’s proposal to have a toothless citizens’ assembly AFTER he forces through his preferred system is absurd.

Introducing Alternative Vote would concentrate power even more than now with two big parties (particularly the Liberals). Saying his party might review other suggestions later isn’t how meaningful reform has ever happened in the real world.

Reforming our electoral system in Ontario is a hugely popular idea!

Ontarians are tired of unaccountable majority governments won with 40% of the vote, devastating policy flip flops, and most of our votes going in the trash.

Electoral reform will be a major election issue in Ontario.

We need political leaders who will take the high road.

Leaders who will set aside their dreams of a partisan power-grab—and think about voters.

Who will put evidence first.

And who will let citizens lead.

For a crash course on why Alternative Vote could deliver worse politics than we have now, watch our webinar.

Alternative Vote: It's no solution to the democratic deficit
Share This