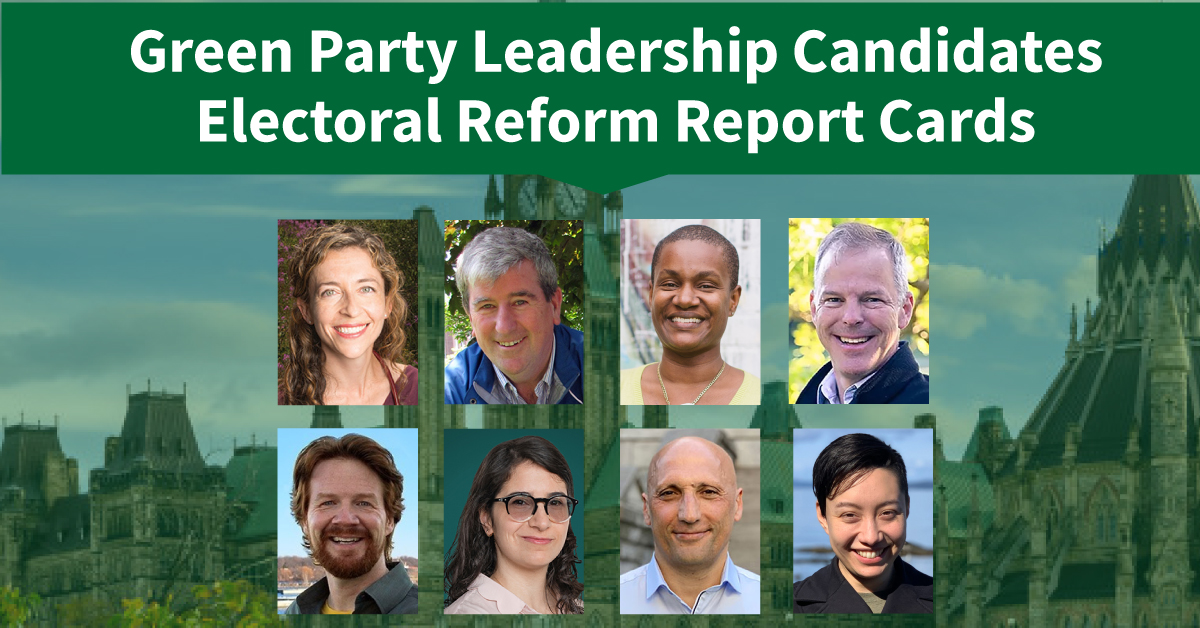 We know the Green candidates support proportional representation – that’s not up for debate! It’s also important to note that the Green Party members – not the leader – set the policy.

We also know that regardless of the party’s policy book, principles, and membership-driven processes, the party leader matters.

Fair Vote Canada gets involved in many different party leadership races with the goal of ensuring that whomever assumes the leadership is an informed, committed and passionate champion of proportional representation. We have no preferred candidate in this race, and no position on other issues. The best outcome for Fair Vote Canada is that each candidate has done their homework and is prepared to make action on PR a priority!

Through decades of committees, commissions, referendums, and political promises, we’ve developed a wealth of evidence and experience to inform our current positions.

We advocate for a National Citizens’ Assembly on Electoral Reform as a truly representative, independent, and non-partisan process voters can trust. We listen to the majority of experts who have expressed deep concerns with referendums as a way to make informed decisions.

We need political leaders publicly committed to making proportional representation a priority if they hold the balance of power or have an opportunity to influence the government’s agenda in a minority Parliament.

All candidates have been made fully aware of our positions and what we are looking for. They have also been made aware that we will be looking primarily at the plan on their candidate websites and only secondarily at what they said during the debate hosted by Fair Vote Canada in June. This report card is based on how well the positions of the Green Party leadership candidates align with ours.

The report cards are presented in alphabetical order below. Any or all of them can be shared on Facebook by following the link provided. Please see below each report card for a more detailed comment on the candidate’s platform and any information we have about their past advocacy on electoral reform. 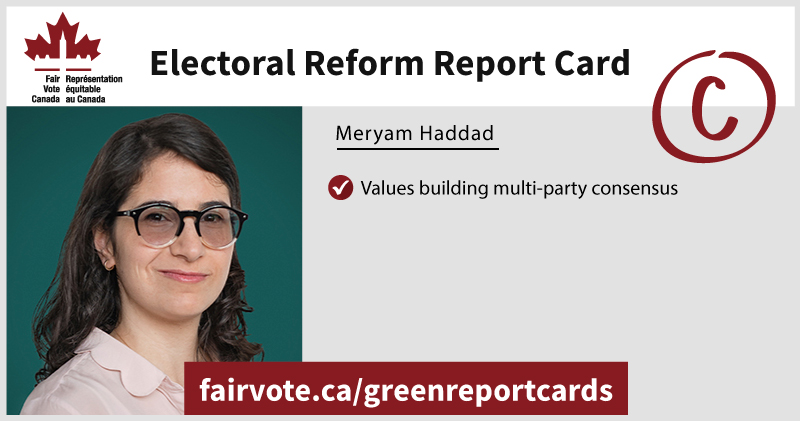 There is nothing on Meryam’s website about PR. Like Fair Vote Canada, Meryam recognizes multi-party support as a condition for success. Meryam appears to support a referendum, which expert opinion and experience suggests is a poor vehicle for citizen deliberation and informed decision-making.

“I think we need to work just like MDN in Quebec. They pushed for consensus instead of technicalities. All opposition parties joined forces and signed an agreement to reform the voting system. What did MDN do that Fair Vote didn’t back in 2016? They decided to focus on only one voting system, instead of having a debate on which one is the best. There’s no point to do that, because voters are not interested by the voting system, they are only interested in having proportional representation. So also, MDN did a fantastic job at spreading awareness about that system, only one, Mixed Member Proportional, instead of debating like I said, popularizing all the other systems. It is important to explain to Canadians only one voting system, and look at what failed and avoid that in the future. And in QC, we are almost winning, we will have a referendum on proportional representation in 2020.” 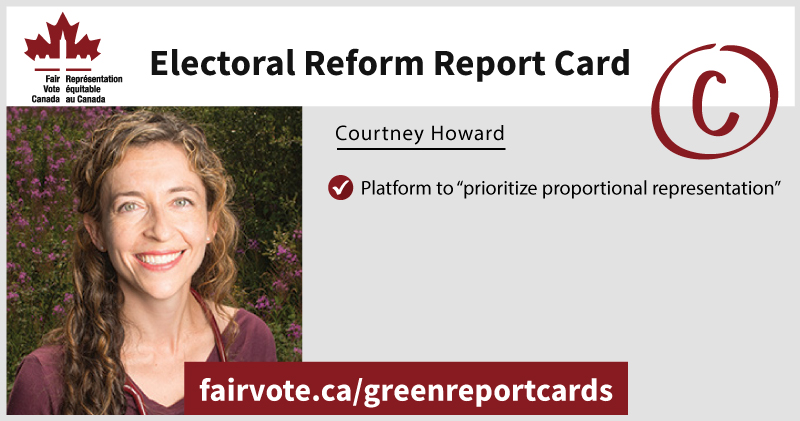 Courtney’s full platform has one line on electoral reform: “Prioritize electoral reform.” There’s no doubt she’s a supporter of PR but she offers no details about how much of a priority PR would be in a minority or any steps to achieve it.

From her platform video,“Power up New Leaders”: “We need to prioritize proportional representation. Having more diverse voices around the table means we get better ideas and less blind spots.” 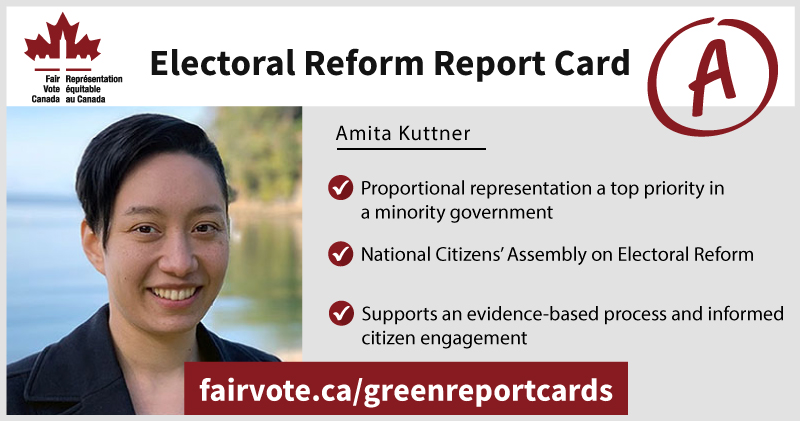 NOTE: We updated Amita’s report card Sept 2 since they clarified their new platform and have made enhancements to what is featured on their website. Amita has proposed a plan that begins with a National Citizens’ Assembly on Electoral Reform – a gold standard process of evidence-based, citizen-led engagement and decision-making. They have also identified action on that plan as a top priority. Amita volunteered with Fair Vote Canada BC canvassing during the 2018 referendum.

From Fair Vote Canada’s debate: “Electoral reform is absolutely a top priority for me, because it’s necessary for justice and representation. And I think given the urgency we need to take a pragmatic approach from many directions, making sure that we take every opportunity that we have. So immediately, as leader of the Green Party, I will continue to work with other parties to implement a Citizens’ Assembly and to foster the broad support we will need across the country, I will work with every NGO that’s willing to get that communicated.”

Amita volunteered with Fair Vote Canada BC canvassing during the 2018 referendum. 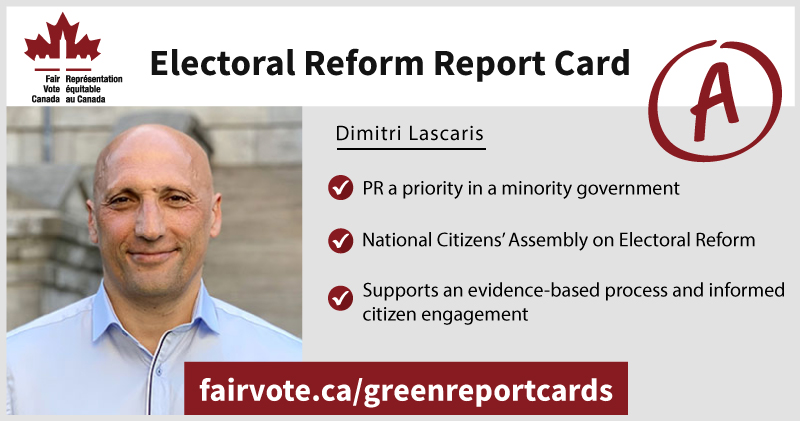 Dimitri indicates that he would prioritize proportional representation. He supports a National Citizens’ Assembly on Electoral Reform as a gold standard process of evidence-based, citizen-led engagement and decision-making. Dimitri has volunteered with Fair Vote Canada’s London team and has spoken out for PR on Real News.

From Fair Vote Canada’s debate: “Justin Trudeau promised electoral reform over 1800 times. What more proof do we need that that Liberals will never implement electoral reform unless they are compelled to do so? In the light of that reality I have a different approach. In the current five party era I estimate it takes about 35 seats to influence the formation of a government. We can win at least 35 seats but only if we unite millions of progressive voters under our party and that will give us the leverage we need. We would be able to compel the adoption of a democratic electoral system in those circumstances. But to do that, we’re going to have to advance a boldly progressive platform…” 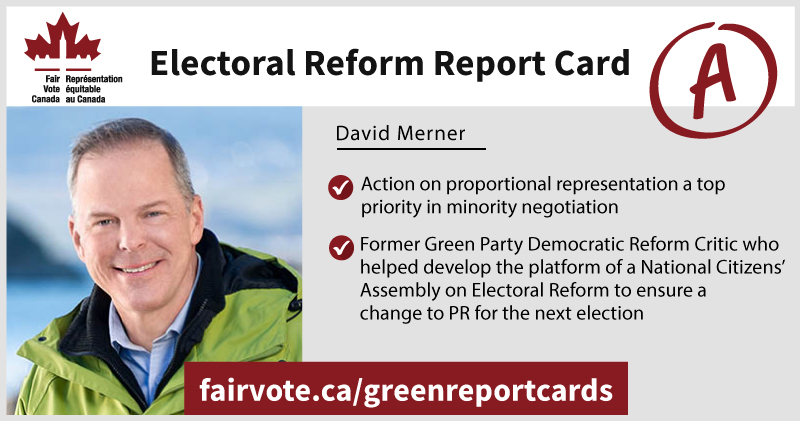 David also notes that during his listening tours: “I’ve heard a lot of support for the idea that, in a minority government situation where Greens hold the balance of power, we must ensure that Pro Rep legislation is an essential element of any cooperation agreement.  Over and over, I’ve heard that proportional representation must be implemented without delay and our negotiating position should be that a condition of providing our support to a minority government should be that (1) the government will move straight to legislation without delay; and (2) the responsible House of Commons legislative committee should lead a full cross-country consultation with experts and with Canadians who reflect the full diversity of our country.”

These approaches can work together, with the main messages being a) starting with a strong negotiating position and b) ensuring any consultation reflects the full diversity of the country.

David describes his long history of work in the electoral reform movement:

“I believe deeply that our “First Past the Post” system has to go and it’s time for proportional representation. That’s why I served as a volunteer on the Fair Vote Canada board for seven years, first as a member at large, then as Secretary, and finally as Vice-Chair. That’s why I knocked on thousands of doors in Esquimalt-Saanich-Sooke during the BC referendum on Pro Rep.  (We won the popular vote in our riding, but lost provincially.) If you care deeply about implementing Pro Rep and you are looking for a leader who is personally committed to Pro Rep and has proven that commitment through years of service to the Pro Rep cause, please rank me Number One on your ballot for leader of the Green Party of Canada.” 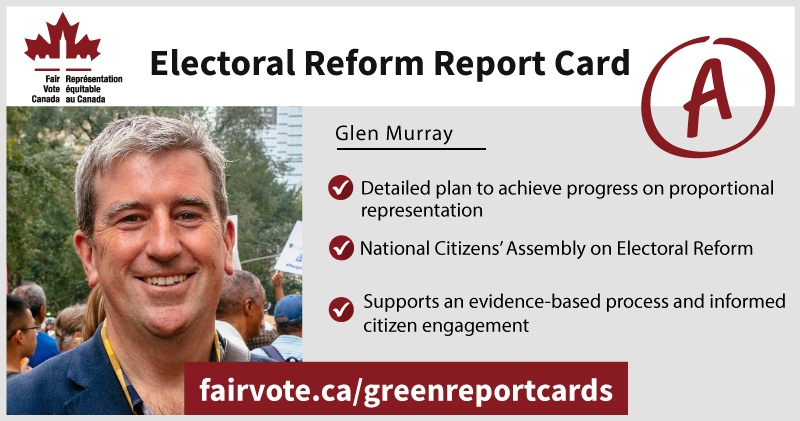 Glen has a detailed and thoughtful position and plan on his website which can be found here.  Glen supports implementing MMP when Greens have power to do so. He states “Sad but true – the only way to secure electoral reform is through electoral success within the existing system.”  This is a point he emphasized during Fair Vote Canada’s debate – that Greens must win enough seats in the existing system to have the leverage to make change.

Glen states that “in the immediate term” he supports the Green Party 2019 platform to hold a National Citizens’ Assembly and implement the recommendations in time for the next election. This suggests that Glen places a high priority on pushing for action in a minority, although he could be more explicit about that.

“As an activist movement, we have to be an activist movement, which means aligning with Fair Vote Canada, aligning with Leadnow. I worked with Dave Meslin when we passed legislation in Ontario that enabled ranked ballots in municipalities and gave municipalities choice, that’s one piece. We have to be more successful in the existing system. That means nominating candidates right away, not waiting till the next election, picking 50 seats. 6-8% of Canadians are going to vote for us, but unlike any other party fully ⅓ of Canadians actively considering voting Green…Let’s identify where those 33% are because we can find them, they’re very diverse, multicultural, and let’s focus on those 33% of Canadians…” 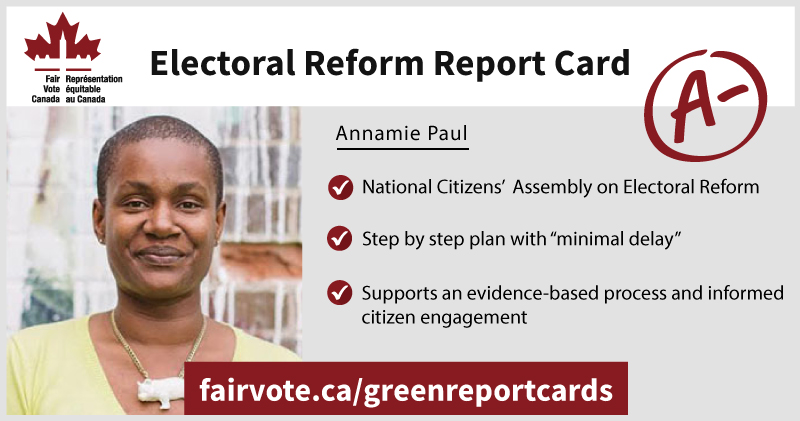 Annamie has laid out a step by step plan that begins with a National Citizens’ Assembly on Electoral Reform – a gold standard process of evidence-based, citizen-led engagement and decision-making. There is some question of whether her proposal of four topics for the Assembly to consider would make it unnecessarily lengthy and might hinder having a new electoral system in place in time for the next election. It is also not clear what priority Annamie places on negotiating an Assembly process in the event of a minority government. 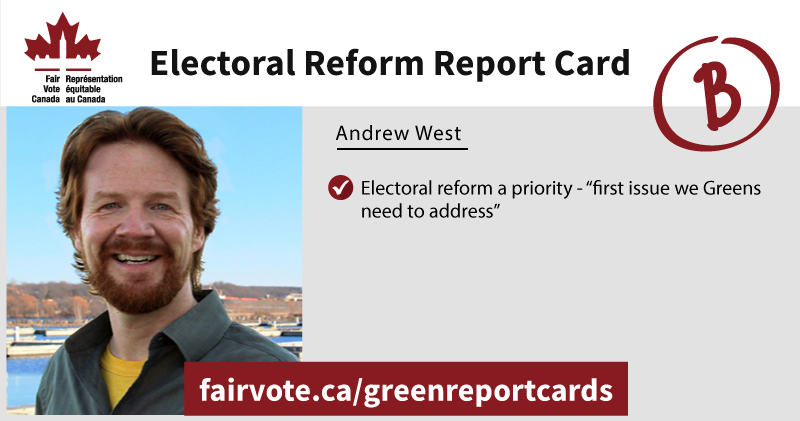 Andrew’s website states that PR is the “first issue we Greens need to address.” It is not clear if he is referring to a minority government situation, as he goes on to say that he will lead Greens to be elected “then it will be the Green Party that will have the integrity to change our electoral system to better represent all voters.” Andrew describes himself as a “major advocate” for proportional representation, noting he has been speaking to local high schools about PR since 2016 and made a submission for a specific PR system involving the Senate to the ERRE.