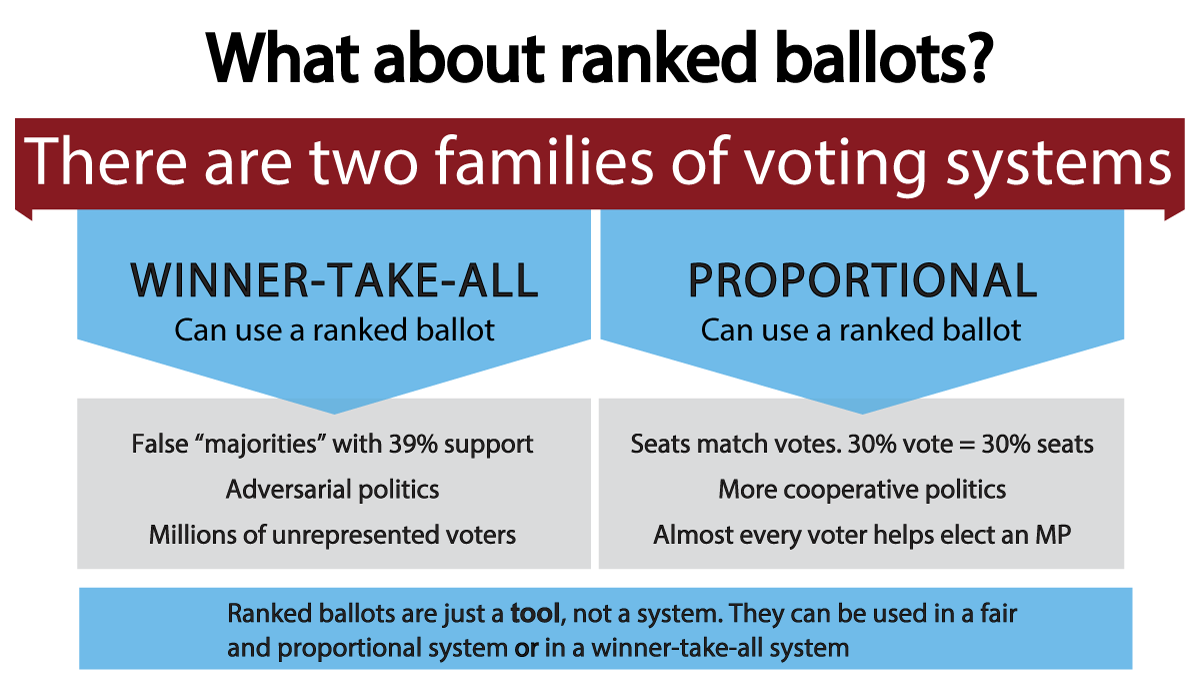 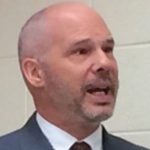 His research has focused primarily on issues of democratization and democratic reform in western countries in both contemporary and historical contexts. His published work includes articles in the Canadian Political Science Review, the Journal of Canadian Studies, Studies in Political Economy, the Journal of Parliamentary and Political Law, Inroads, and the Socialist Studies Bulletin (now Socialist Studies), reviews in the Canadian Journal of Political Science, the Canadian Parliamentary Review, Socialist Studies, Labour/Le Travail, and BC Studies, as well as reports for the Law Commission of Canada, the Centre for Social Justice, and the Canadian Centre for Policy Alternatives. In 2007 he published The Politics of Voting: Reforming Canada’s Electoral System, in 2009 co-edited (with Michael Howlett and Tracy Summerville) British Columbia Politics and Government, and in 2013 published Wrestling with Democracy: Voting Systems as Politics in the Twentieth Century West.

The following are excerpts taken from two talks given by Dennis Pilon in 2012 and 2015.

Background Notes: The Alternative Vote (AV) has been used for 100 years in Australia. It was used for 30+ years to elect provincial MLAs in Alberta and Manitoba in all ridings except large urban ones (which used proportional representation). AV was also used for two elections in BC in the 1950. Research on its use in Canada and Australia is frequently referred to below.
–

Is there any evidence that adoption of the Alternative Vote will be a step to proportional representation? What does history tell us?
– 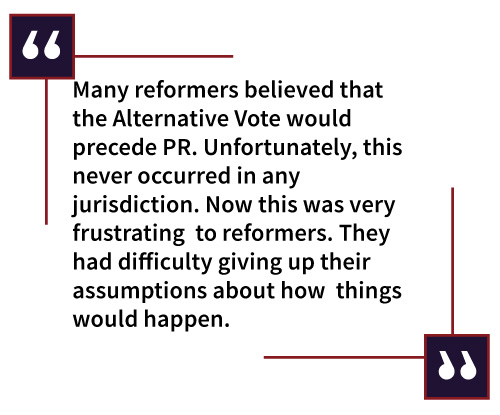 Often the support of the Canadian Farmers, as a political force, or Labour, was based on the belief that one would lead to the other. Many reformers believed that the introduction of the Alternative Vote would precede the introduction of the Single Transferable Vote form of PR. In other words, they believed that AV would pave the way for the other result that the reformers preferred.

Unfortunately, this never occurred in any jurisdiction. In other words, nowhere did the adoption of the Alternative Vote lead to its replacement by STV.

Now this was very frustrating to reformers. They had difficulty giving up their assumptions about how things would happen.

As many of you know, the Alternative Vote was introduced for non-urban areas for legislative elections in Alberta and Manitoba in the 1920, used for 35 years, along with STV in the urban parts of Alberta and Manitoba. And these were accomplished by Farmer governments.

When introduced, the Farmers had promised that AV was just temporary, and would soon be replaced by STV when a model could be worked out to accommodate these vast rural areas.

So they said “Well, this is just a temporary measure, there’s a light on one side that won’t light, I’ll just take it back to my workshop, bring it back all fixed and ready.

The American head of the US PR Society, lobbied throughout the 20’s and 30’s to get the Farmers to make that change. In fact he even commissioned his own research group to come up with a workable plan to extend STV to each of the province’s rural areas. And the voluminous details of this plan still reside in the Society’s archives which are currently handled at Columbia University in New York City. I’m not sure anybody ever read those proposals. They were certainly never implemented.

And the reasons for that are simple: Politics.

The Farmers, who had many idealistic ideas about democratic reform, gave up many of them when they came to power in favour of more pragmatic considerations.

So PR was great for Alberta and Manitoba’s cities where it would keep the Farmer’s opponents divided while the Alternative Vote was great for everywhere else where Farmers were dominant because it would allow them to maintain that dominance.

In Australia, its rationale was simple. To prevent the Labour Party from coming to power. Now in the end it didn’t work, the Labour Party did come to power in all states in Australia and at the national level, but AV did allow non-Labour parties to work together more effectively, and so, it’s arguably stayed in place for that very reason.

One the claims is that AV will increase the influence of smaller parties, because AV will remove the strategic consideration in our system, first-past-the-post, where people voting for a smaller party is a waste of my vote. I don’t want to waste my vote.

Right now they’re knocking on your door saying “Don’t vote for what you want. Vote for what you’ll put up with, to kill that party you really hate.” That sends people to the polls in droves…Is that a stirring speech for democracy?

So what we have here is claims about how the system will work, and the idea is that now AV will free up voters, voters can vote for the party they want, but they have a fail-safe, they have a parachute, because they can rank the other candidates, the more competitive candidates second or third. 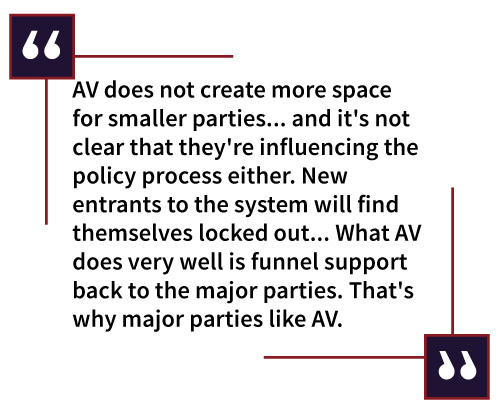 Well here, too, the evidence from Australia and Canada doesn’t back up the claim.

For instance the evidence from Australia does not back up the view that AV allows smaller parties to gain their own legislative representation. Australia has remained stubbornly a two party system.

The only time we saw it break away was when one party literally divided, the Labour Party, and again that representation came in the upper house, the proportionally elected house, not in the lower house.

So AV does not create more space for smaller parties.

But does it increase the policy influence of other parties?

Well that is harder to prove. Under our current system you will often see centrist parties pluck policies from the margins when they figure it’ll work for them, but it’s unclear how we can demonstrate the influence at the electoral level under AV.

One way to try to judge influence is more direct. What impact do vote transfers have on the actual results of the election?

A number of scholars have looked at this and they have suggested that the number of cases where transfers have changed the results – in other words the leading candidate before the transfers are added in doesn’t win – that is firmly in single digits in the Australian experience. So it really isn’t happening very much. So the people who say that this Alternative Vote system will allow more dramatic changes after the transfers, that’s not really satisfied in terms of the evidence.

In the Canadian cases we have a pool of 17 elections. Vote transfers changed the results in just 2.6% of the ridings throughout the 17 elections in Alberta. So very rarely.

In British Columbia, on the other hand, it changed the result in 12.5% of the results in the first election. Which may have been a reason the system didn’t survive more than two elections. The parties don’t like that kind of instability, and so when they were in a position to get rid of the system they did.

So the claims that are being made about how AV will alter our elections I don’t think are really supported by the evidence.

What AV does allow voters to do is support smaller parties if they want, but it doesn’t necessarily mean they’ll elect them, and it’s not clear that they’re influencing the policy process either.

So if you’re a major party, particularly a centrist party, then AV is a good way to minimize the risk of an unstable party system, and particularly the risk of new entrants. New entrants to the party system, new challengers, will find themselves locked out in a similar way to first-past-the-post, but for the major parties they don’t have to worry about it splitting their vote because AV will funnel that support back to them.

Will Alternative Vote lessen the power of the Prime Minister’s Office, improve voter turnout, or lead to increased diversity in Parliament.
–

The problem is with the parties and how the parties are making choices around candidates. Will AV help us with that? I think that’s a fair question.

Well, again, I hate to be Mr. Bad News, continually bringing forth bad stuff, but again I think the evidence from Australia and in Canada suggests AV will not address these concerns about the democratic deficit. 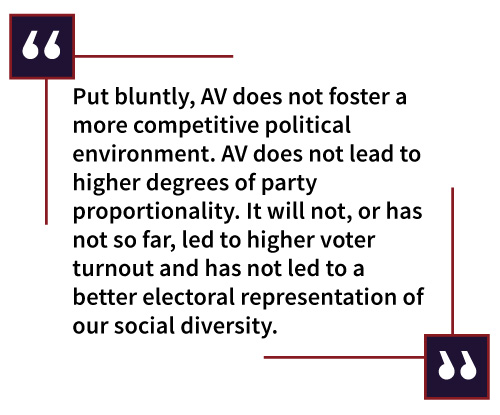 AV does not lead to higher degrees of party proportionality.

It will not, or has not so far, led to higher voter turnout and has not led to a better electoral representation of our social diversity.

One thing AV does do very well is elect majority governments.

In the Australian case – and it was very interesting to compare Canada, the United Kingdom, New Zealand and Australia – and Australia is a very majoritarian system. The Alternative Vote regularly produces governments that have a legislative majority. Very rarely – I think there were two cases over the 100 year period – where you had a hung Parliament, or a minority Parliament as you call it in Canada.

Canada quite often produces minority Parliaments, but not so under the Alternative Vote.

Does the Alternative Vote encourage more parties to run – even if they don’t win?

Well there is some evidence that the Alternative Vote may encourage more parties to run in the Canadian and Australian experience. But as noted, it doesn’t mean they’ll win. The evidence is that AV is no better at representing small parties or new parties than first-past-the-post.

What about executive dominance?

Well, given the tendency of the Alternative Vote to produce majority governments, and its record in Canada was also very similar to the Australian one, that would suggest that AV is not the antidote to executive dominance.

If part of our problem with executive dominance is that leaders of parties have a majority of seats in the Parliament so they don’t have to listen to Parliament, then the Alternative Vote, which will regularly produce majorities, is not going to lessen executive dominance.

Voter turnout: AV’s impact on voter turnout is difficult to use from the Australian experience because of course they have mandatory voting, so it’s hard to know.

Having said that, to be fair, proportional representation is also taking a hit. While proportional countries on average have about 7% more voter turnout, they have also seen a decline in voter turnout, just like first-past-the-post countries. So some of the problems we’re facing will not be solved by any electoral system.

What about diverse representation?

Well here again we can look at the examples in Australia and the Alternative Vote has not been a good translator of Australian preferences. We know this because the same electorates voting at the same time in Australia but using different voting systems have elected significantly different levels of say women’s representation.

So what’s going on there? Are voters just thinking that women belong in the Senate but not the lower house? That doesn’t seem very possible.