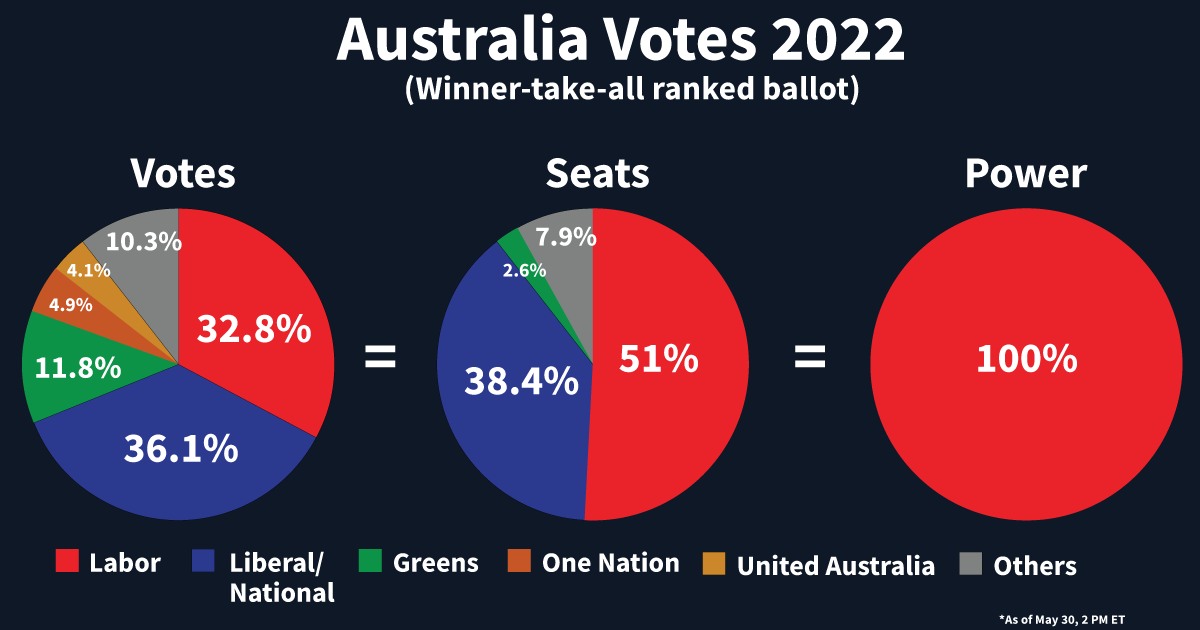 Australian Labor Party wins a “majority” government with 32.8% of the vote using the voting system Justin Trudeau and Steven Del Duca are coveting

Remember when Justin Trudeau’s Liberals formed a government with an historic low of 32.3% of the popular vote, bragging about “voter efficiency”? While first-past-the-post handed them a whopping 47% of the seats, the federal Liberals still need the support of some MPs from other parties in order to pass legislation, thank goodness.

That could all change, however, if Canada adopted the voting system Justin Trudeau and Ontario Liberal leader Stephen Del Duca are coveting: the winner-take-all ranked ballot (properly called Alternative Vote) that is used in Australia.

With a mere 32.8% of first choice preferences, the centre-left Australian Labor Party won 51% of the seats and 100% of the power. Labor is the first party to win a government from Opposition with declining first-ballot support.

Australian Broadcasting Corporation Chief Analyst Antony Green says “We’ve never seen support for the major parties drop so low at a federal level before.” Despite that, third and smaller party voters were almost entirely shut out, as is usual in Australia. That’s because votes for smaller parties were mostly funneled into the baskets of the big two: Labor and the Liberal–National Coalition. The exception was the teal independents, a field of independent candidates running in seats held by the Coalition, united by a commitment to stronger climate action, who won six new seats.

The Australian Green Party’s 11.8% voter support resulted in only 2.6% of the seats: four seats. Still, these four seats are hailed as an historic breakthrough—their roughly 10% support in many previous elections had only ever translated into one seat in Australia’s lower house.

Thanks to the winner-take-all ranked ballot, Australia has an entrenched two-party system, where the two-party duopoly trades power back and forth.

Sometimes there are “wrong winner” elections, where one party wins more of the popular vote, but the other party forms a majority government.

Despite no single party ever commanding a majority of voter support in Australia, there has only been one minority government since 1940.

Climate change was a ballot box issue this election, and some are calling Labor’s election victory “the revenge of the barbecued koalas”. After nine years of conservative governments, Australia ranked dead last on climate policy on the 2021 Climate Change Performance Index.

But voters wanting stronger policies than what is offered by the centrist Labor Party, including those who rejected Labour in favour of the teal independents, will still be out of luck. In addition, any new climate policies brought in by Labor risk being torn up again the next time the government changes, thanks to winner-take-all voting.

A similar situation afflicts Canada. There’s nothing to stop a party with 39% (or less) of the vote from getting all the power, and ignoring what most voters actually want. Meaningful democratic renewal is sorely needed to usher in collaborative politics and tackle long-term challenges.

Unfortunately, progress on electoral reform is repeatedly sabotaged by parties more interested in power hoarding than in giving voters an equal voice.

The Ontario Liberal Party’s platform promise to implement the same winner-take-all ranked ballot system used in Australia is a classic example. A phony reform like Alternative Vote is a transparent power grab, and should be soundly rejected—as it was by almost every expert who testified to the federal all-party ERRE committee in 2016.

Fair Vote Canada continues to call on all party leaders to commit to an independent, non-partisan Citizens’ Assembly on Electoral Reform. It’s the most viable path to forge the multi-party support needed to implement electoral reform, as well as build the public trust necessary for legitimacy.

It’s time for politicians to put the good of the country ahead of their partisanship and show courage and integrity on electoral reform—by putting evidence first. 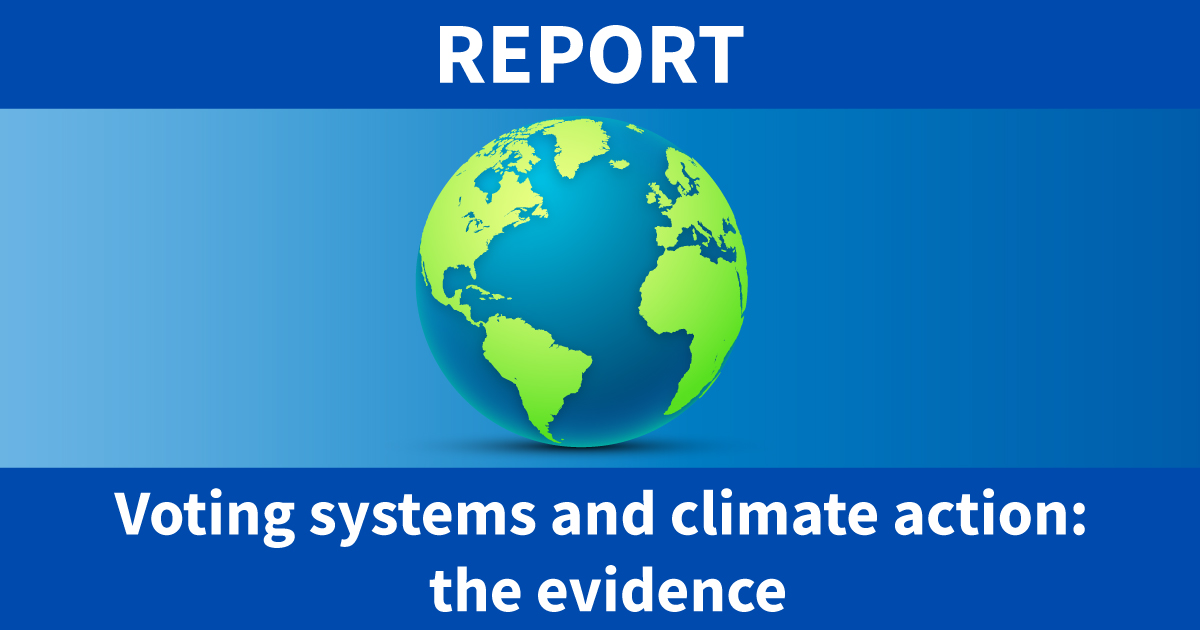