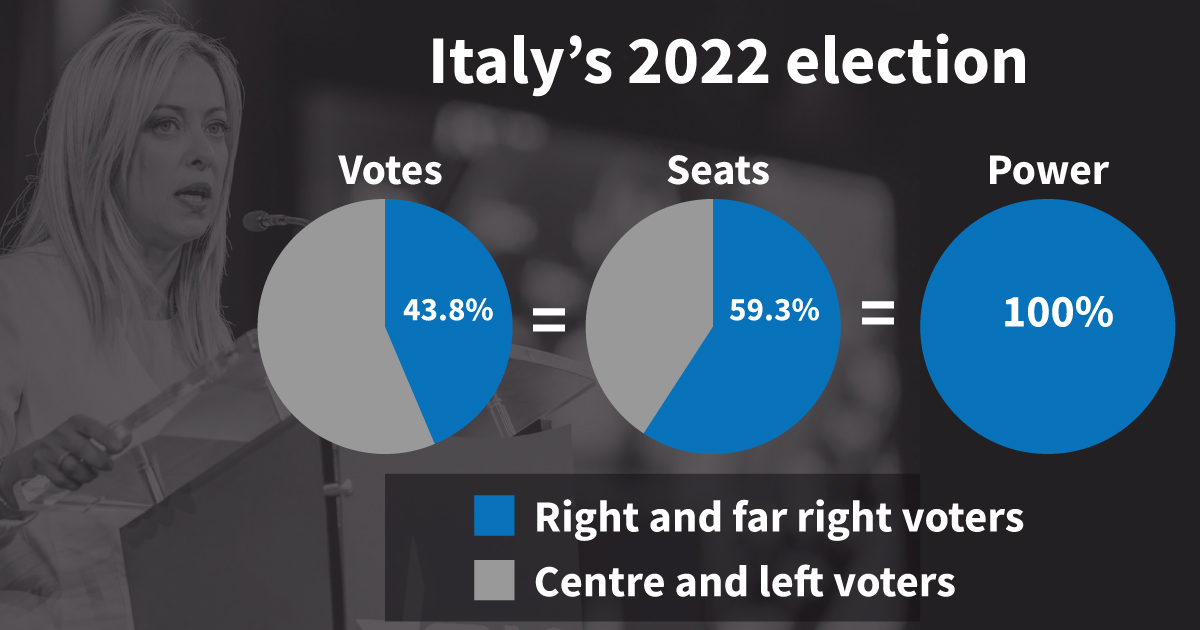 Italy’s right-wing coalition has just won a majority of seats―and 100% of the power―with only 44% of the vote.

Over 56% of Italian voters voted for centre or left-of-centre parties, but Italy will now be led by a right-wing coalition with a far-right Prime Minister.

Giorgia Meloni, leader of the Brothers of Italy Party and the incoming Prime Minister, told the media in 1996 that the fascist dictator Benito Mussolini “was a good politician, in that everything he did, he did for Italy.”

The consequences could be grave.

“The far-right Brothers of Italy and the League are the two main ideological drivers of the right-wing coalition, so we should expect an additional crackdown on migration policies and the rights of minorities (especially LGBTQI+ people), and in all likelihood further barriers to accessing abortion, when Meloni comes to power.”

James Newall, writing for the London School of Economics and Political Science warns:

“Given that the parties of the right have already revealed themselves to be keen to enact constitutional changes corrosive of individual liberties and principles of democratic accountability, suggestions that Italian democracy might be placed in danger by the outcome of the elections do not, on the evidence currently available, appear to be wholly inappropriate.”

How did the Italy’s right get all the power with 44% of the vote?

It’s like having two parallel elections, one winner-take-all and one proportional.

A parallel system is not a proportional system. There is no mechanism in the system to make the overall results in Parliament proportional.

That’s how the right wing populist bloc captured all the power with a minority of the vote in Italy.

In fact, the last time Italy used a proportional system was 30 years ago.

Italy’s corrupt and power-hungry politicians have been changing the system to suit themselves and shore up their own power for decades:

The last Parliament also cut the number of seats by over one third.

In a parallel system like Italy’s, cutting seats so drastically meant it became even easier for one bloc to win all the power with a minority of the vote.

Warnings from Italy and around the world

For those concerned with building a fair and resilient democracy in Canada, this election is a warning that shouldn’t be taken lightly.

Authoritarian populism is on the rise, at home and around the world.

No country is immune to the forces eroding democracy.

Every country has politicians who would use their power to concentrate power even more around themselves―or to roll back human rights.

How much power they can realistically achieve depends not only on their popular support, but also whether votes are translated fairly into seats.

Systems that can hand a minority of voters a majority of the seats put democracies at greater risk.

As Farbod Faraji and Lee Drutman point out in the Chicago Tribune, Viktor Orbán’s rise to power in Hungary is thanks to a large dose of “winner-take-all”. Orbán’s Fidesz party took a more proportional voting system and made it more majoritarian.

Countries like the US, Canada, the UK and Australia, who use pure winner-take-all voting systems, are at the greatest risk. In these countries, those with extreme or anti-democratic views can capture a mainstream party and ride to power with a little more than a third of voter support.

Eighty percent of Canadians―voters from all parties―support a National Citizens’ Assembly on Electoral Reform.

If we value an inclusive, resilient and forward-thinking democracy, the time to act is now.