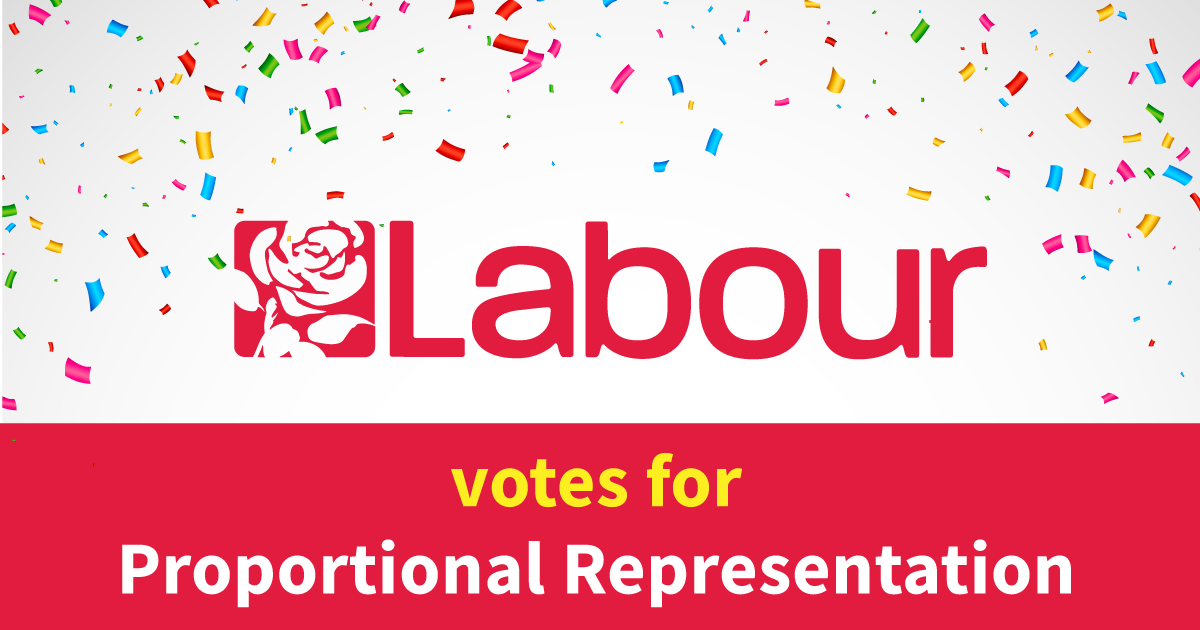 The motion approved at the UK Labour Party convention reads:

Labour must make a commitment to introduce Proportional Representation for general elections in the next manifesto.

During its first term in office the next Labour government must change the voting system for general elections to a form of PR.

Labour should convene an open and inclusive process to decide the specific proportional voting system it will introduce.

The success of the resolution for PR at the convention follows on the heels of:

For 100 years, the Conservatives and the Labour Party have dominated British politics, benefitting from massive seat bonuses awarded by first past the post. 90% of the time since 1935 the UK has had single-party “majority” governments, but none have had the support of a majority of voters. The Conservatives currently hold a majority of seats with just 43.6% of the votes.

The next election in the UK is expected in 2024. Polls show Labour in the lead, but project they will be lacking the seats to form a single party majority. The centrist Liberal Democrats, the Scottish Nationalist Party, Plaid Cymru, the Green Party, and individual MPs from other parties across the spectrum are calling for PR.

The Liberal Democrats, who have long campaigned for proportional representation, have made PR a condition of support for a Labour minority government.

Labour Leader Keir Starmer has signalled he has little interest in changing the voting system, but will be under tremendous pressure from his party’s own supporters, including former Shadow Chancellor, John McDonnell, who stated:

“I think Keir’s been mixing with the royalty too much for the last few days. He’s not a feudal monarchy. He’s an elected leader of the party, accountable to the party and accountable to all of us.”

Fair Vote Canada congratulates our UK allies, Make Votes Matter and the Electoral Reform Society, as well as Labour for Electoral Reform, on a solid step towards making every vote count for Westminster.

Full text of the motion

Our political system has catastrophically failed to represent people’s wishes, needs and votes.

No one voted for housing, food, heating or transport to be beyond the means of ordinary people.

No one voted for our health, education and justice systems to be underfunded past breaking point. To build a better society address distrust and alienation in politics and to safeguard the union, everyone must have an equal voice

First Past the Post (FPTP) does long-term damage to the health of our democracy.

Labour must commit to fixing it,

Devolution was a major achievement of the last Labour government. Labour is already committed to extending democracy, from strengthening devolution to Lords reform.

But our democratic system will remain broken – until we replace FPTP with a form of Proportional Representation.

There are systems of PR that retain a strong constituency link between MPs and their electorates, while ensuring that votes count equally and seats match votes.

Labour must make a commitment to introduce Proportional Representation for general elections in the next manifesto.

During its first term in office the next Labour government must change the voting system for general elections to a form of PR.

Labour should convene an open and inclusive process to decide the specific proportional voting system it will introduce.