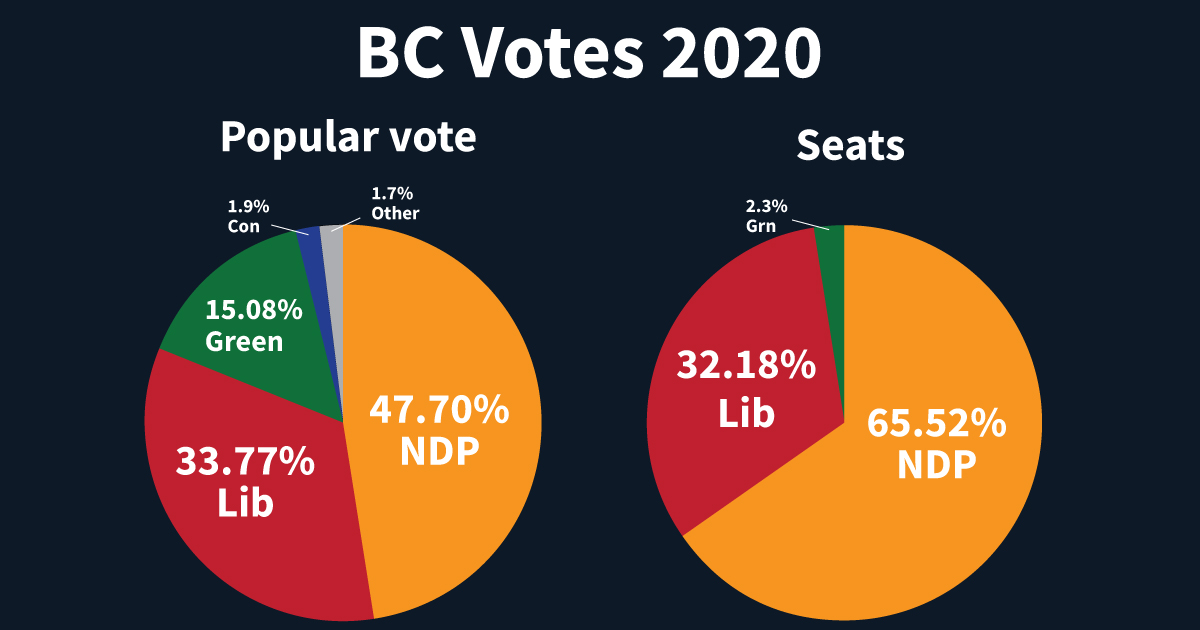 What began with great hopes in BC three years ago―a venture into formal political cooperation between the BC NDP and the BC Greens―has ended tonight in a landslide false majority for the BC NDP.

Across the ocean, New Zealand also just had an election. The contrast to British Columbia’s couldn’t be more stark. It wasn’t just in the numbers―it was in the politics.

In the spring of 2017, the BC NDP were negotiating a confidence and supply agreement with the BC Greens.

In both places, cooperation worked.

In both places, cooperation between parties was essential in the approach to COVID-19.

While proportional countries overall have done better on COVID-19, New Zealand’s leadership shines as a model for the world of how to win the battle.

The similarities between BC and New Zealand’s politics just came to a crashing halt, thanks to first-past-the-post.

They have stuck to this schedule almost without exception in the 25 years since proportional representation was adopted (in 2002 an election was called 3 months early). Early elections just don’t happen in New Zealand.

This year, despite the Labour government polling at record highs thanks to their handling of COVID-19, New Zealand leader, Jacinda Ardern decided to delay the election to make sure COVID-19 was under control.

In contrast, John Horgan broke BC’s fixed election date to call an election a year early, motivated to grab all the power with first-past-the-post. After all, New Brunswick PC Premier Blaine Higgs had just been rewarded with a 39% majority for doing exactly the same thing. It’s the system.

In BC, the election was characterized by the usual divisive fear mongering. An Angus Reid poll days before the election showed a whopping 48% of voters were voting to stop a party they dislike, rather than to elect a party they support.

In New Zealand, voters could vote for the parties they believed in―knowing their voices really mattered.

In New Zealand’s election, Jacinda Ardern’s Labour party was swept back to power in a real landslide: It was the first single majority government in New Zealand since they adopted proportional representation.

Yes, a single party can win all the power with proportional representation! Voters get what they voted for.

In BC, John Horgan’s NDP was also swept back to power in a landslide―with 45% of the vote.

While official voter turnout numbers are not yet available, turnout in BC elections usually hovers between 50 and 60%

But all this isn’t even where the biggest contrast lies.

As a Canadian, watching the mainstream New Zealand news media on their election night, I was shocked.

Proportional representation has changed the political culture in New Zealand―even in the corporate-owned media.

Part of the mainstream election night coverage was a media-created graphic of wasted votes―votes cast that elected no-one. And unlike BC, there weren’t a lot. The country’s media actually cares to show if your vote counted. 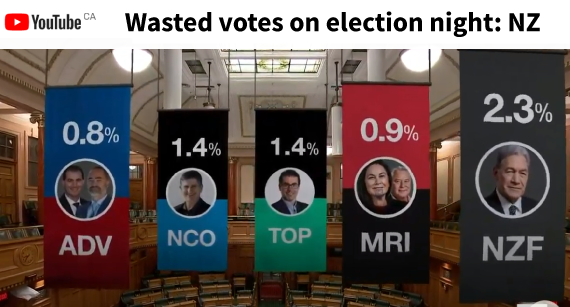 Most shocking of all, the mainstream media commentators, watching the historic landslide majority results come in for Labour, were saying: “Labour can govern on their own―IF THEY CHOOSE.”

Try to imagine the same scenario in Canada:

Justin Trudeau or Stephen Harper wins a huge majority with 39% of the vote―and on election night Global News or CBC suggests that they might choose not to govern alone?

And indeed, that is exactly what unfolded in New Zealand.

On election night in New Zealand, Green Party supporters were bursting with cheers and joy. In fact, one of the Green leaders stated that this win for both parties makes it more likely they’ll be able to get some of their more ambitious environmental policies adopted.

Labour does not need to work with the Greens. They have a majority.

But Jacinda Ardern invited the New Zealand Greens into a cooperation agreement anyway. 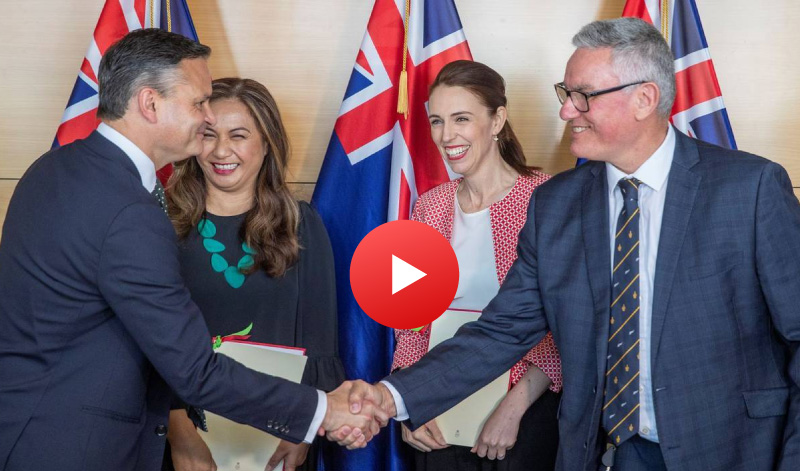 a
How is this even possible?

With proportional representation in New Zealand, politics is no longer a zero-sum game.

In the long term, Jacinda Ardern knows that working with friends is better than going on a three-year power trip.

As Jacinda Ardern stated just days ago, “My view of ‘transformational’ is when you make changes that stick.”

And that’s exactly what proportional representation does.

Over the long term, research shows that proportional representation delivers better results for people: Better outcomes for our health. Our environment. Our economy. Our democracy.

Imagine what Canada’s Parliament would look like if we had a better system.

Imagine the progress we could make on crucial issues.

Imagine what kind of a country we could build… if we had an electoral system that simply gave people what they voted for.

That’s why, no matter which party forms government in any election, we’ll never stop working together to make every vote count.

NOTE: Numbers based on BC election results as of Oct 25/2020. Numbers will change when mail-in ballots are counted. 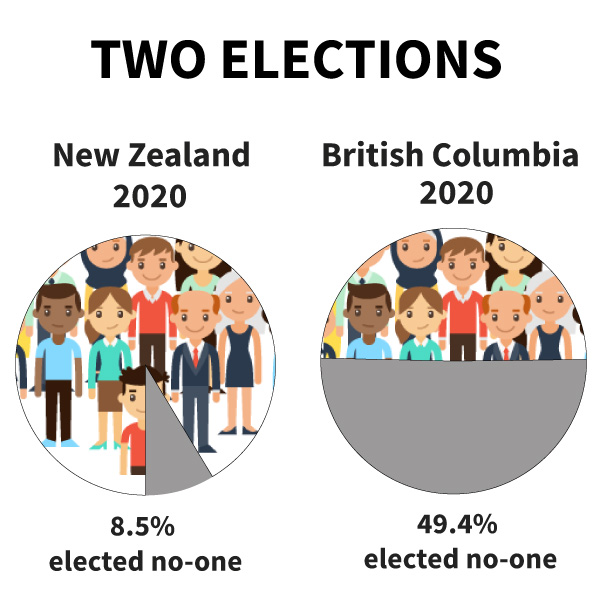 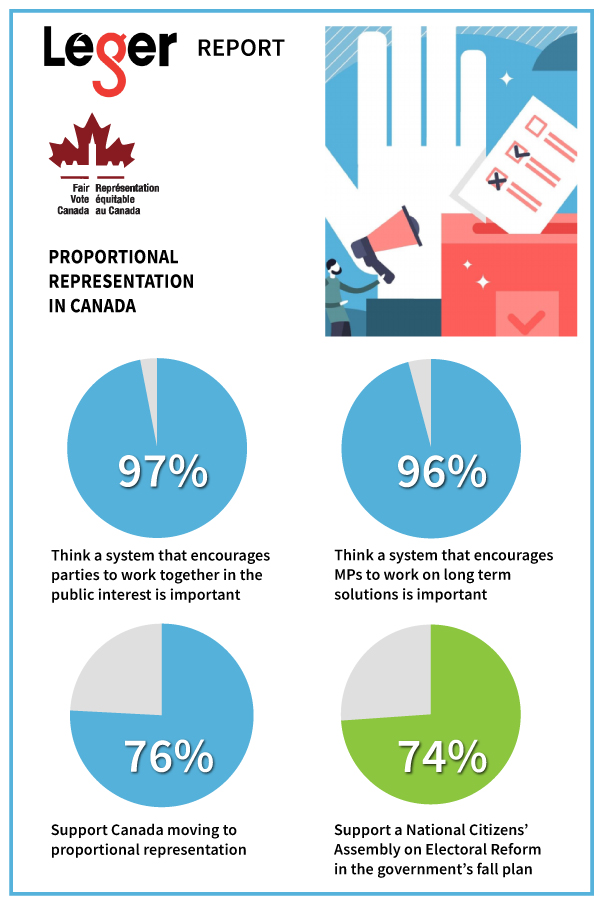