MYTHBUSTER: What about Israel?

About 90 countries around the world use proportional representation (PR), including over 80% of countries belonging to the Organization for Economic Cooperation and Development. Places like Germany, New Zealand, Denmark, Finland, Sweden, Ireland, and Scotland, to name a few.

Research over decades shows countries with proportional representation on average have stronger democracies and produce better outcomes on key measures such as environment, equality, health and economy.

Israel does not use a PR system recommended for Canada. They use a national closed party list system that is inappropriate for Canada’s needs. It would also be unconstitutional. Over the course of 16 commissions, committees and assemblies on electoral reform in Canada, Israel’s PR system has never been proposed in by anyone. It is basically a straw man argument. (You can learn more about PR systems recommended in Canada here).

More important to consider, however, is that the culture and politics in society in Israel is quite unique and different from Canada – and that is reflected in their legislature. This would be true regardless of what electoral system they used.

Find below a column from electoral reform expert and Associate Professor Dennis Pilon in response to an opponent column about Israel. 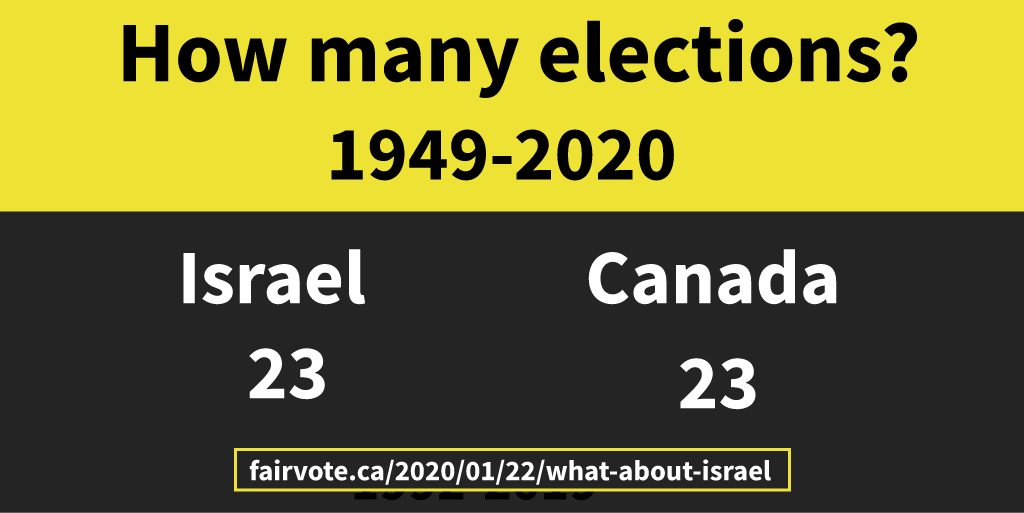 Opponents of voting system reform in Canada know they can’t win the debate by referring to Canadian elections results. The 2019 federal election results were a poster child for everything that is wrong with our first-past-the-post form of voting.

30% of voters in Alberta and 35% in Saskatchewan did not support the Conservative party but got just one seat between them for their efforts – Conservatives won every other seat!

The Bloc Quebecois and the Green party attained roughly similar levels of support but one party got 32 seats while the other got just 3.

The seats totals produced by our voting system make a mockery of the idea that Canada is a ‘representative democracy.’ And recent polls suggest that most Canadians get it – our system of voting leads to distorted, unfair, and unrepresentative results, dangerously magnifying our country’s regional differences and failing to represent the diversity of Canadians and their views.

To combat this growing consensus for change, Canada’s opponents of democratic reform regularly turn to international examples to ‘school’ Canadians to be careful what they wish for. Front and centre in this campaign? Israel.

Despite the fact that most western countries use some form of proportional voting, Israel gets disproportional attention from the critics of change, primarily because they believe it showcases how the use of proportional voting systems inexorably leads to unstable government, fragmented party systems, and too much influence for small ‘fringe’ parties. In research circles, we call this ‘cherry-picking’ i.e. only choosing evidence that supports your conclusion.

A more sound approach would choose countries whose political development and social dynamics were genuinely comparable with Canada e.g. Western Europe or former British colonies like New Zealand and Australia.

But even if we were to set aside these concerns about using Israel as stand-in example of what occurs when countries use proportional voting systems, the critics can’t even manage to present their own case without distorting what has occurred there.

In a recent commentary piece for the Toronto Star, self-described ‘Conservative strategist’ Jamie Watt uses Israel’s experience to warn Canadians about how PR leads politics parties to “fracture, dissolve and rebrand” and “how things can go wrong when small parties have too much power” leading to a “lack of accountability and transparency in government.”

Curiously, this comes after he admits that one man (Prime Minister Benjamin Netanyahu) has managed to dominate Israeli politics for over a decade. Digging deeper, the electoral facts do not support Watt’s characterizations of Israeli politics.

Reviewing election results in Israel from the country’s founding in 1948 what is striking is actually how stable the system has been. Far from producing shaky coalitions that could not govern effectively, Israel’s party system has been characterized by long-lasting coalitions where the dominant parties supplied the Prime Minister and all senior ministers while small parties were not able to exact much by way of concessions or cabinet posts.

The first governing coalition lasted from 1949-1977, the second from 1977 to 1984, and another from 1984 to 1990. In that period Israel actually had fewer elections than Canada, just 12 compared to 14 here at home, suggesting that the political coalition dynamics were stable enough to regularly last a 3 or 4 year term in office.

Since 1990, Israel’s party system has become more competitive but not any less stable. Between 1992 and 2019, Israel has held 10 elections while Canada held 9.

Proportional voting has worked well for Israel, allowing it to create a stable polity under some pretty challenging circumstances. Creating governing coalitions there often takes some time but they have regularly been accomplished, and in a much more transparent and accountable way than the coalitions embodied in Canada’s so-called ‘big tent’ parties.

Watt shows his undemocratic hand when he complains that the party with the most votes should govern rather than a coalition that really does reflect a majority of voters. This is why democratic reform opponents so often resort to scare tactics and distorted accounts of politics in unfamiliar foreign lands. They have to find ways to justify their continued opposition to genuine majority rule and an accurate representation of what Canadians vote for and yet somehow make it sound democratic.

Dennis Pilon is the author of Wrestling with Democracy: Voting System Reform as Politics in the Twentieth Century West and The Politics of Voting: Reforming Canada’s Electoral System.

Read a blog post by Jason Shvili about why the Israel electoral system is fairer than Canada’s:

Blog: The Case for PR in Israel