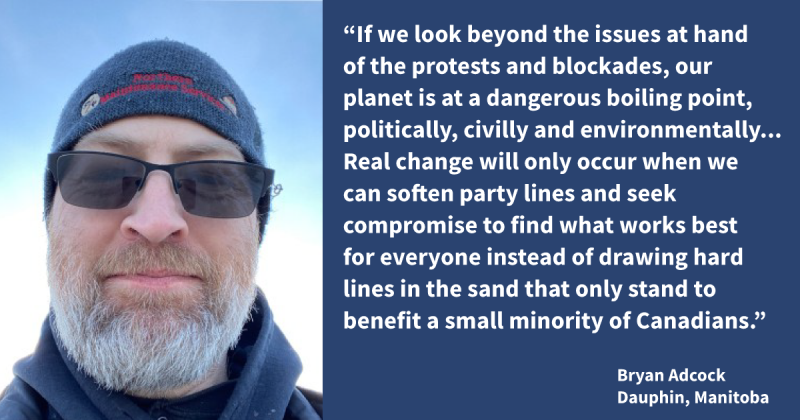 On February 22, 2022, Bryan Adcock, shared his letter to all MPs with Fair Vote Canada. We thought his words should be shared more widely, so we have posted his letter below.

I have hesitated to write this as I have been an underrepresented Canadian my entire life and past letters to my own MP’s are usually ignored because they are more concerned with holding party lines than engaging with all of their constituents. However that is exactly why I feel it is important to write this letter to you all right now.

We have all watched what has unfolded in Ottawa and at our borders over the past few weeks. Some in support of Canadians’ right to peaceful protest and some in opposition as Canadians turned against Canadians by blocking borders and the transfer of goods. Regardless of where any of us stand, one thing is painfully apparent. Canadians are divided and our political structure is complicit in this fact.

Further to this, watching the events inside the House of Commons over the past few weeks shows the true colors of how Canadians are divided. We learn from what we see. Members of Parliament have shown more and more that hurling insults across the floor is more important than finding solutions to the issues we are facing. If we look beyond the issues at hand of the protests and blockades, our planet is at a dangerous boiling point, politically, civilly and environmentally. These issues do not need divisive politics and viewpoints, they require collaboration and understanding. We will never make any ground if we remain locked at the horns in constant battle. Real change will only occur when we can soften party lines and seek compromise to find what works best for everyone instead of drawing hard lines in the sand that only stand to benefit a small minority of Canadians.

Maybe this is the wake up call we have needed to bring some dignity back to our democratic processes. We can look to countries like Denmark, Sweden and Finland who have consistently ranked at the top of the happiness index. Why? Because they trust their governments to take care of them. Because the people in those countries are more important than corporations and party lines are. Because the voices of the people truly matter, and not just the voices of 16% of the population. When who has the power is the only thing that matters, ALL Canadians lose.

If the government and elected officials truly care about what’s right for ALL Canadians, maybe it’s time to seriously consider some type of electoral and government reform that truly reflects the wants and needs of the real majority of Canadians. We can’t continue down the road of extremism and division. Canada needs a safe, sane voice that balances the needs of everyone, and we will never get that without a little empathy and the willingness to work together and maybe even learn to compromise a bit.

This is not something that can be done by any one of the elected parties either. If reform is even an option a Citizens Assembly should be created to allow the voices of Canadians to be heard instead of just what the parties want. I implore all elected representatives to stand up for ALL Canadians, not just their base. Let’s work together to bring dignity back to our democratic processes and dignity back to Canada and Canadians. We can’t do it by standing against each other, and true unity will involve working together so that a true majority of Canadians are represented. This should be considered the issue of our times—we won’t be able to face the issues ahead of us without first learning to work together.

I’m a 46 year old father, husband and grandfather. I was born and raised in Edmonton, AB and currently reside in Dauphin, MB with my wife, three children and a grandson. I pursued an education in environmental sciences due to a love of nature and wildlife when I was younger, graduating in the early 2000’s. I work away from home for extended periods so when I’m home I spend as much time with my family as I can. One of my favorite hobbies over the last few years has been fly fishing. I never had much interest in politics until our past government started gutting environmental protections, it was at this time I started getting into advocacy, although most of this was by jumping on existing campaigns either signing petitions or sending letters to my local MP. It was also at this time that I realized that our political system was stacked against anyone that did not vote for the Liberal or Conservative parties and started to notice the division in our country. Facebook quickly became a place where instead of connection, more often than not there were only political arguments on the far ends of the spectrum and very little civil discussion. It was soon after that I became aware of Fair Vote Canada and supportive of the platform. In 2018 I left all social media except for the professional platforms as I was growing tired of the political polarization and information or better yet, misinformation overload. I truly feel that as a whole people need to learn to reconnect with the ideals of civil discourse as we seem to have lost the ability to communicate what we believe and stand for in healthy ways. The only way we will meet the challenges of our time is by working together to find solutions regardless of our political views, this will require meeting somewhere in the middle. As the old saying goes “united we stand, divided we fall.”