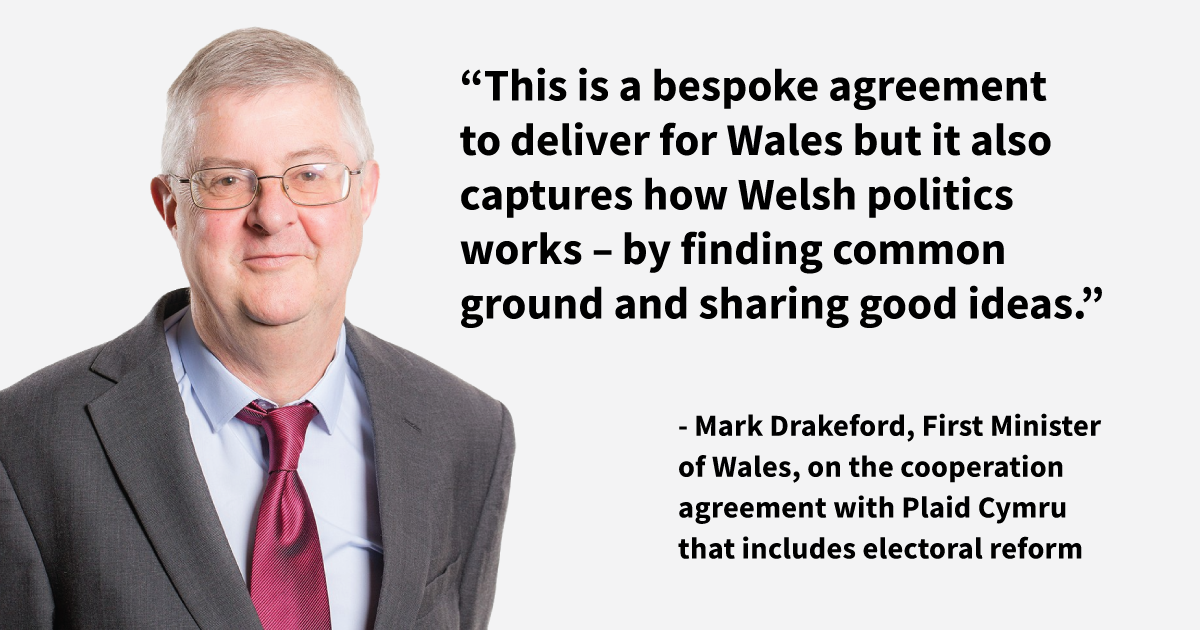 Cooperation between parties in Wales for good governance and electoral reform

Welsh Labour and Plaid Cymru have just signed a 3-year cooperation deal which includes a commitment to electoral reform:

“Working together we will:

Support plans to reform the Senedd, based on 80 to 100 Members; a voting system, which is as proportional―or more―than the current one and have gender quotas in law. We will support the work of the Senedd Special Purpose Committee and introduce a Senedd reform Bill 12 to 18 months after it reports.”

“This is a bespoke agreement to deliver for Wales but it also captures how Welsh politics works―by finding common ground and sharing good ideas.

“As Wales faces many challenges from Brexit, the climate emergency and the ongoing pandemic, co-operation has never played such a pivotal part in our democracy.” 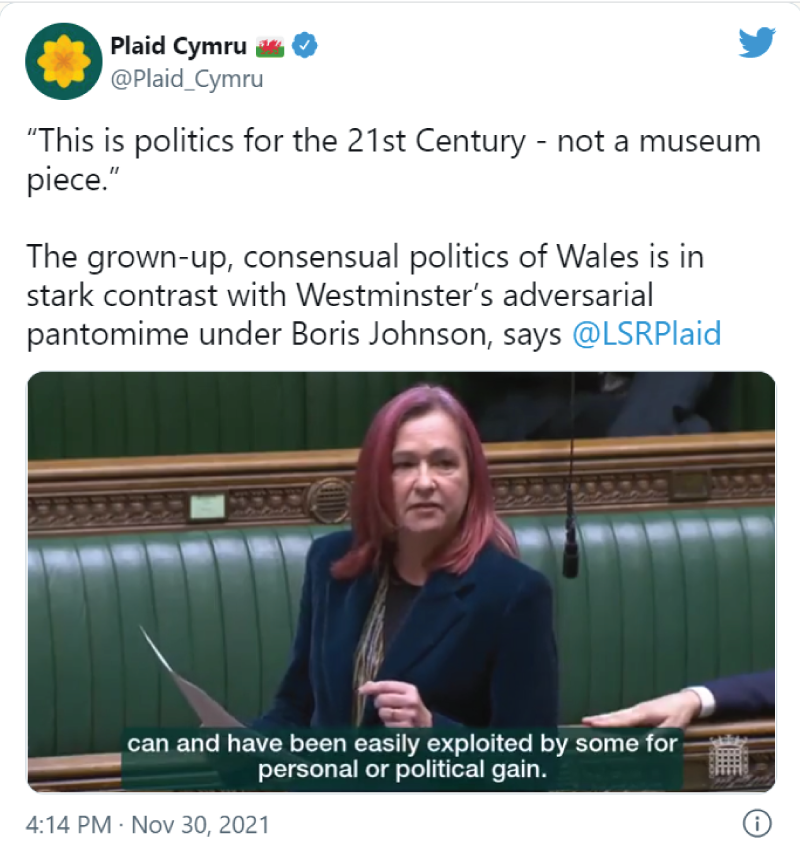 Over the past five years, calls have grown louder to make the semi-proportional system now used in Wales more proportional—and three parties have been laying the groundwork to make it happen.

In 2020, the Senedd Committee on Electoral Reform, chaired by a Labour Party member, also recommended that Wales make its electoral system more proportional by adopting STV in time for the 2026 election.

Both the Liberal Democrats and Plaid Cymru included STV in their 2021 platforms.

“We will build on the work of the Senedd Committee on electoral reform.”

Improving the electoral system in Wales would require the support of two thirds of the Welsh Assembly members. Labour, Plaid Cymru and the Liberal Democrats together hold 44 of the 60 seats in the Assembly.

These cooperative efforts to make the electoral system more proportional stand in sharp contrast to the divisive, partisan politics of electoral reform in Canada.

Federally, Justin Trudeau rejected the evidence from the 2016 all-party committee on electoral reform (ERRE) when 88% of the experts recommended proportional representation.

Trudeau has made it clear that the only system he will discuss is the Alternative Vote (winner-take-all ranked ballot), even though experts show it could deliver results that are less proportional than first-past-past-the-post, no other party wants it, and it would only benefit the Liberal Party.

Many of our politicians, immersed for too long in the cutthroat politics of first-past-the-post, are just not up to the job of designing an electoral system that works for people.

It’s time to put evidence first, and let citizens lead with a Citizens’ Assembly on Electoral Reform, both nationally and in Ontario. 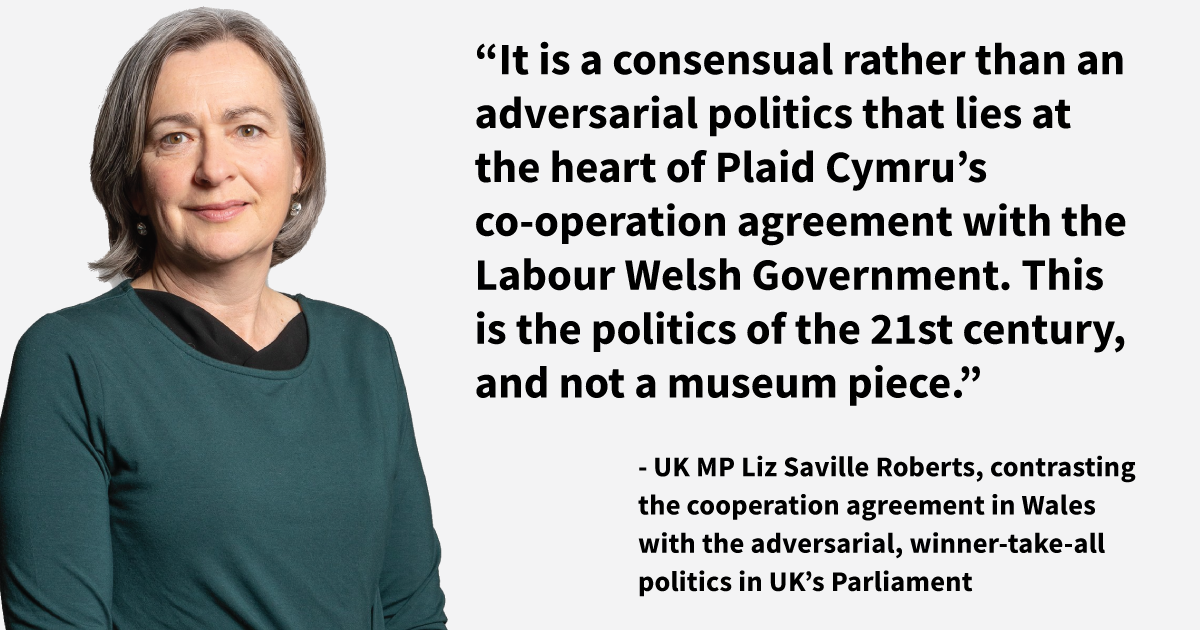 MMP can be designed to be very proportional.

However, in Wales, only 20 out of the 60 seats are “compensatory seats” (seats which add proportionality), so the results are seriously skewed. In the 2021 election, for example, the Labour Party won 50% of the seats (30 out of 60) with about 37% of the popular vote.

A 2017 report by the independent Expert Panel on Assembly Electoral Reform recommended that Wales switch to Single Transferable Vote (STV), the proportional electoral system used in Ireland. According to the panel, “STV delivers against our principles of proportionality, equivalent status for Members and voter choice.”

In 2020, the report of the Electoral Reform Committee in Wales chaired by the Labour Party recommended:

Legislation should be introduced early in the Sixth Senedd to provide that Members of the Senedd are elected by the Single Transferable Vote electoral system with effect from the 2026 election. 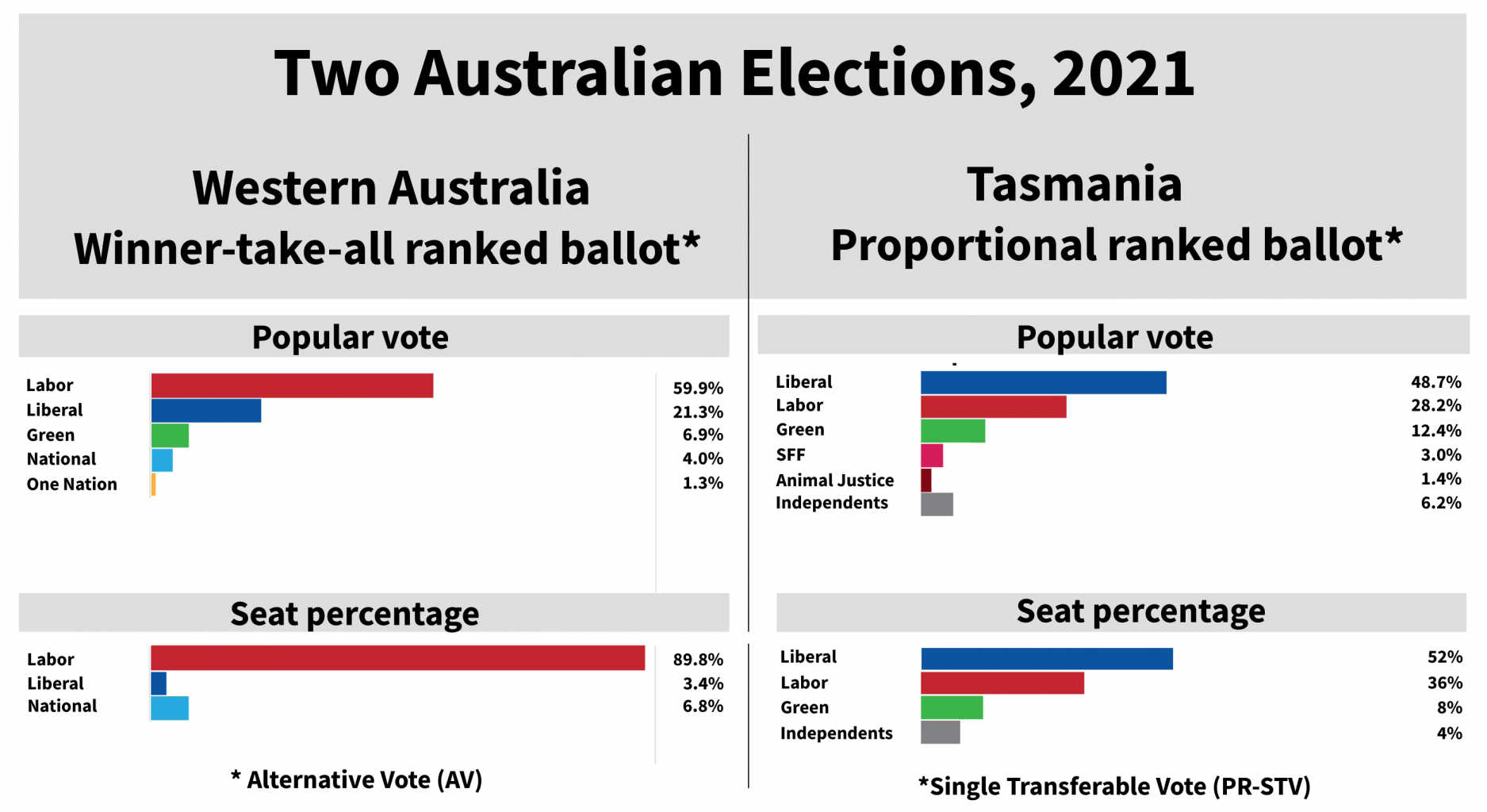