Discussion of electoral reform after the federal election often included claims that proportional representation would let “extremists” into Parliament.

The “extremists” are already here.

The Hill Times reports that 15-30 MPs and Senators are forming a caucus to stand up for healthcare workers who don’t want to get vaccinated.

Can you spot the difference?

“Ms. Gladu suggested rather than firing people from their jobs, employers can use rapid tests to determine whether staff are COVID-19 positive, or transfer them to positions that do not involve contact with patients.” 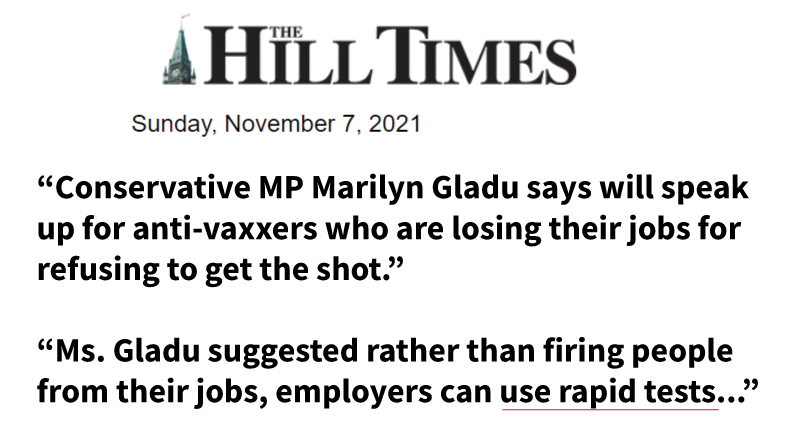 “The only rational, but unrealistic way to prevent its spread would be to deploy rapid testing everywhere instead of a useless #VaccinePassport.” 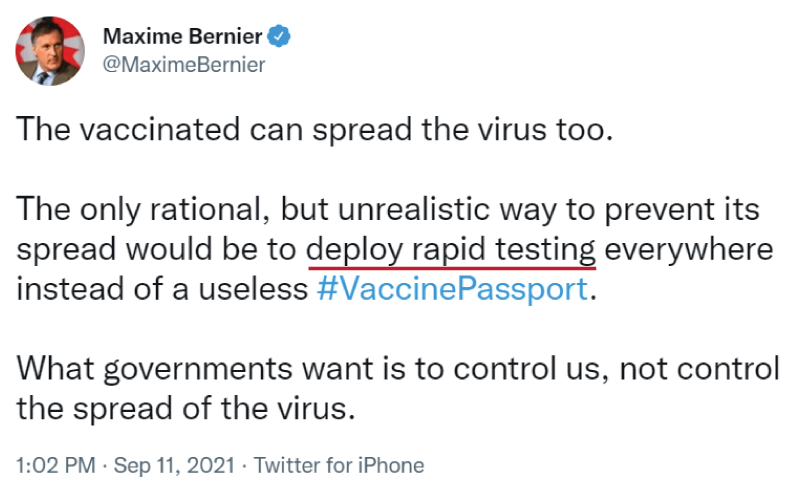 Simulations in the media after the election showed that with a purely proportional system, the People’s Party of Canada might have got about 20 seats.

Fair Vote Canada’s expert simulations showed that with proportional systems that were realistic for Canada, that would have been about 6-8 seats.

But as some columnists gleefully noted, just the prospect of any elected MPs holding “extremist” views was enough to frighten people. Bob Hepburn:

That’s because they realize Maxime Bernier’s upstart right-wing People’s Party would have been one of the big winners if this month’s election had been run under a proportional representation system.

Hopefully the spectre of Bernier’s People’s Party playing an influential role in a future Parliament will cause PR backers to see the folly of this dreadful idea.”

Many commentators seem to have forgotten that Maxime Bernier lost the 2017 Conservative Leadership race by only 1.9% in the final count.

That’s how close Canada came to having an anti-vaxxer as the leader of our Official Opposition, and possibly our Prime Minister.

With first-past-the-post, an anti-vaxxer could easily be leading a party that needs only 30-something percent of the vote to form a “majority” government.

Today, we have a group of federal MPs elected by first-past-the-post opposing vaccines.

MPs with these views have more representation and more potential for power than they ever would in a PR system designed for Canada.

In Ontario, the failure of first-past-the-post to protect us from unpopular views on vaccination is even more stark. 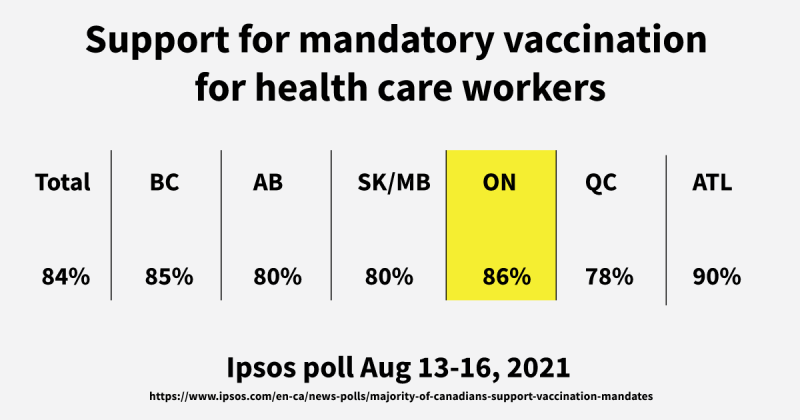 Yet Doug Ford’s Conservative government—elected to a “majority” with 40.5% of the vote—has just announced that he won’t force health care workers to get vaccinated.

In reality, proportional representation works to ensure that all policies have real majority support.

Unlike first-past-the-post, when MPs with “extreme” views are in their own small party, rather than inside a big tent, voters clearly know what they’re voting for.

Research shows that proportional representation doesn’t actually increase the number of people voting for far-right parties. Given a clear option, voters don’t flock to the extremes.

If a small far-right party’s policies are too far out of line with mainstream opinion, the other parties will cooperate with each other and govern collaboratively, to ensure the smaller (extremist) party is excluded from government.

This has happened in Sweden, Germany and the Netherlands.

As Canadians electoral reform expert Dennis Pilon suggests, what passes for “debate” on proportional representation in Canada is based on a fear of voters.

What would happen if the 52% of votes that are currently wasted counted for something?

Real world experience and research suggests making votes count works, for our health, environment and economy. We have far more to lose—and put far more at risk—by shutting Canadians out.