Colin Walmsley is a Rhodes Scholar and University of Oxford public policy graduate. He is a representative for Fair Vote Alberta and a former national councillor for Fair Vote Canada. This article  was published on CBC on September 21, 2021.

Congrats, Canada. You made it through a gruelling five-week campaign to end up with… well, pretty much exactly the same Parliament as before. I’m sorry if your election night watch party — like mine — was a dud, but you at least have to hand it to the TV commentators. Faced with getting us to care about what may be Canada’s least interesting election results, they tried to spice up our night with some saucy language.

Toronto has locked out the Tories; the West is a Conservative bastion; Vancouver’s a progressive melange; the Greens have been swept off the map; and so on and so forth. Commentators pulled up their maps, coloured in like a child’s paint-by-numbers Canada, and told us of a country divided between the conservative rural regions and the progressive cities.

In reality, regions don’t vote. People do. And if we want to address the growing regional rifts in Canada — rural vs. urban, east vs. west, separatist vs. federalist — future elections should use a proportional voting system that reflects this basic fact.

Not as divided as we seem

Though you wouldn’t know it by looking at a map of our election results, we aren’t quite as divided as our land-centric electoral system would make it seem. Millions of rural Canadians regularly vote for progressive parties, just like millions of urban Canadians vote for conservative ones.

First-past-the-post obscures this fact by giving one politician in each riding 100 per cent of the power with a simple plurality of the vote, denying any representation to minority voices. A proportional voting system would instead showcase the diversity of opinions across Canada by allowing the election of both conservative and progressive voices in every region, urban and rural.

Relying on scare tactics, they point to the chaos of poorly designed systems, like the one in Israel, instead of looking at successful systems, like those in Germany and New Zealand, that would most closely resemble any proportional voting system implemented in Canada.

But while the damaging consequences of first-past-the-post have been most evident abroad, recent election results make it clear that Canada is stuck on the same track. By artificially shutting political parties out of ridings where they have minority support, our electoral system detaches parties from their supporters in entire regions of the country, leading to death spirals of misunderstanding and disengagement.

For example, consider Paul, a hypothetical voter in rural southern Saskatchewan. Paul is a farmer who has typically voted NDP, attracted by the party’s traditional support for rural health care, agricultural marketing boards, and public rural transportation. However, election after election, the NDP wins about 20 per cent of the vote in Paul’s region without ever winning a seat.

The resulting NDP caucuses in Ottawa are largely devoid of rural representation. The party’s elected members of parliament, overwhelmingly from urban ridings, naturally focus on issues of concern to their urban constituents: the questions the party brings up in the House of Commons are urban questions; the party’s platforms are tailored to appeal to urban areas; and the candidates who run in the party’s leadership races are urban candidates with urban concerns.

Paul, understandably, starts to suspect that rural issues have become a secondary consideration to the NDP, and begins to consider voting Conservative. The Conservatives, meanwhile, have dozens of rural MPs, but no MPs from major downtowns outside of Alberta, despite winning about 20 per cent of the vote there.

So the NDP loses Paul and other traditional rural voters to the Conservatives, and the Conservatives lose their traditional urban voters to the NDP and the Liberals. Now even more dependent on their respective urban or rural strongholds, the parties harden their region-centric views, play to their bases, and rely on turning out their supporters instead of reaching out to those outside of their core demographics. And so the cycle repeats to worse and worse extremes, resulting in the grim demographic divisions we saw on Monday.

Canada’s rural-urban divide wasn’t nearly so pronounced in decades past. As recently as the 1990s, the Liberals competed in the rural West and the Progressive Conservatives won in urban centres. But as our electoral system has progressively siloed rural and urban areas in their respective echo chambers, our regional political rifts have worsened.

Regions don’t vote, so regions shouldn’t decide elections. People should. If we truly want to address our country’s growing rural-urban divide, we need to establish a proportional, people-centric voting system. 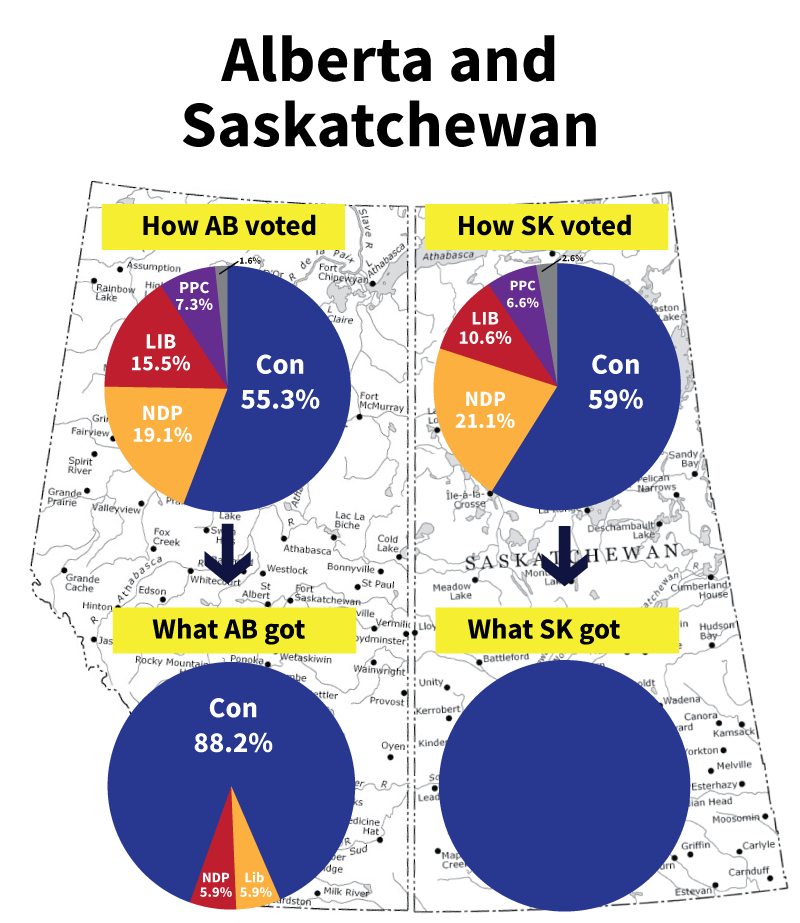 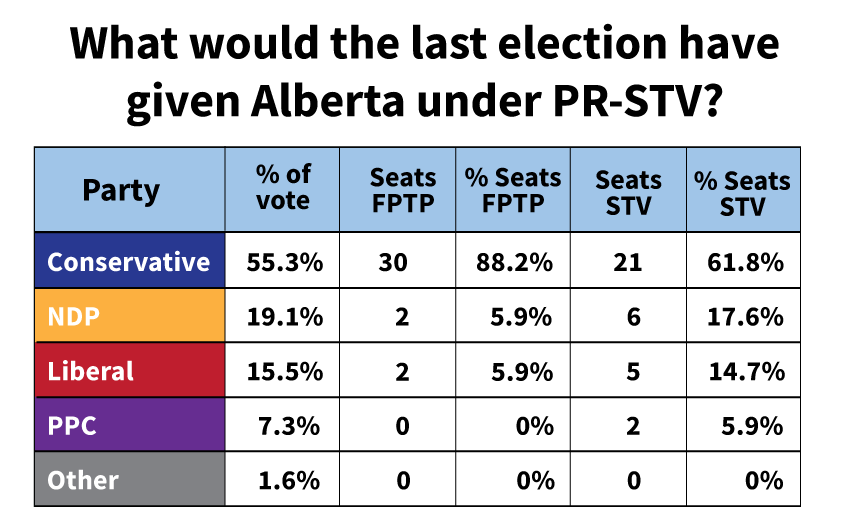