Yes to reform. No to Trudeau’s hand-picked system. 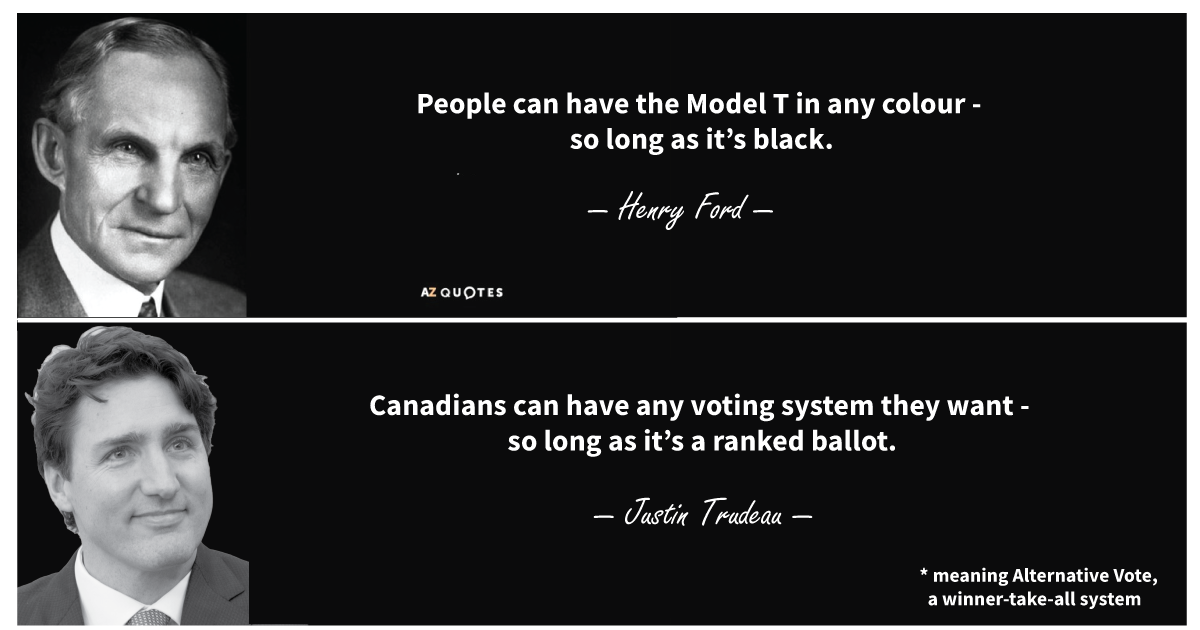 Yes to reform. No to Trudeau’s hand-picked system.

Today Trudeau is telling Canadians that he’s open to electoral reform, but the options are:

Trudeau’s single-minded fixation on a winner-take-all “ranked ballot” (Alternative Vote)—and blindness to the evidence—is EXACTLY why we need a National Citizens’ Assembly on Electoral Reform.

In 2016, the federal Electoral Reform Committee (ERRE) spent five months listening to experts from Canada and around the world.

Only 4% of the experts who testified to the federal electoral reform committee (including those invited by the Liberals) recommended Alternative Vote. Alternative Vote would replicate or exacerbate the problems with our current winner-take-all voting system, distorting the popular vote even more than today, mainly to the benefit of the Liberal Party.

88% of the experts who testified to the ERRE recommended proportional representation. (See “No consensus?”)

It’s easy to see the appeal of the Alternative Vote for Trudeau.

Simulations of the last two elections (and many elections before that) show that Alternative Vote would have given the Liberals a huge seat bonus—and massive false majorities—without any more public support.

In 2017, Trudeau stated that he heard citizens and experts loud and clear: 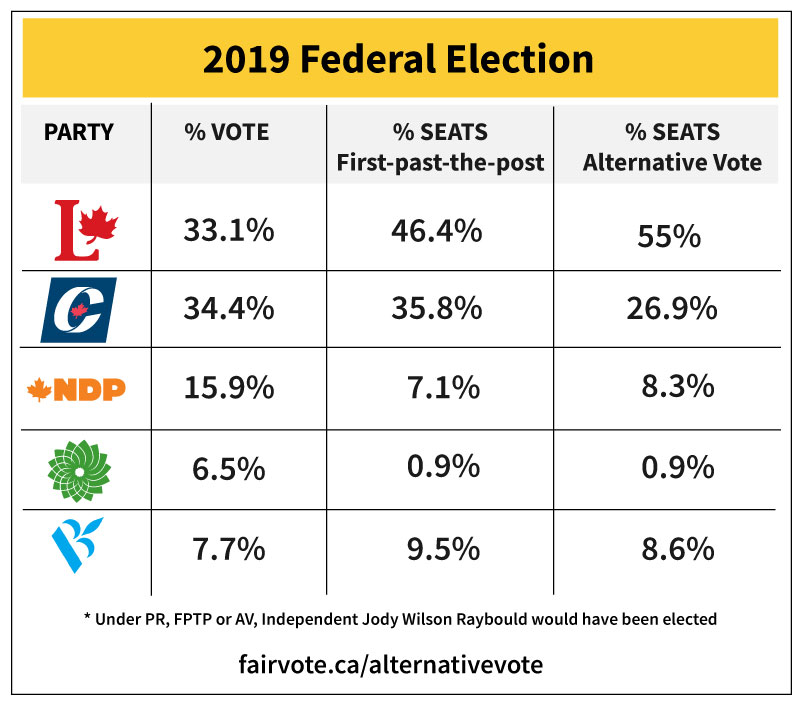 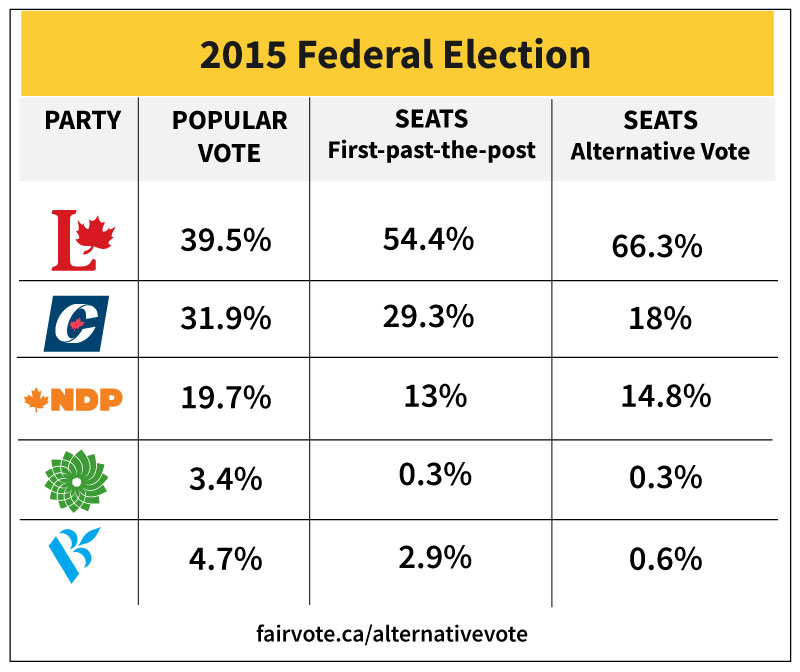 Yes, proportional representation can also include the ability to rank choices.

But the POINT of a proportional system, whether it includes a ranked ballot or not, isn’t to deliver one party a massive false majority—the point is to more accurately reflect the voices of Canadians in their Parliament. 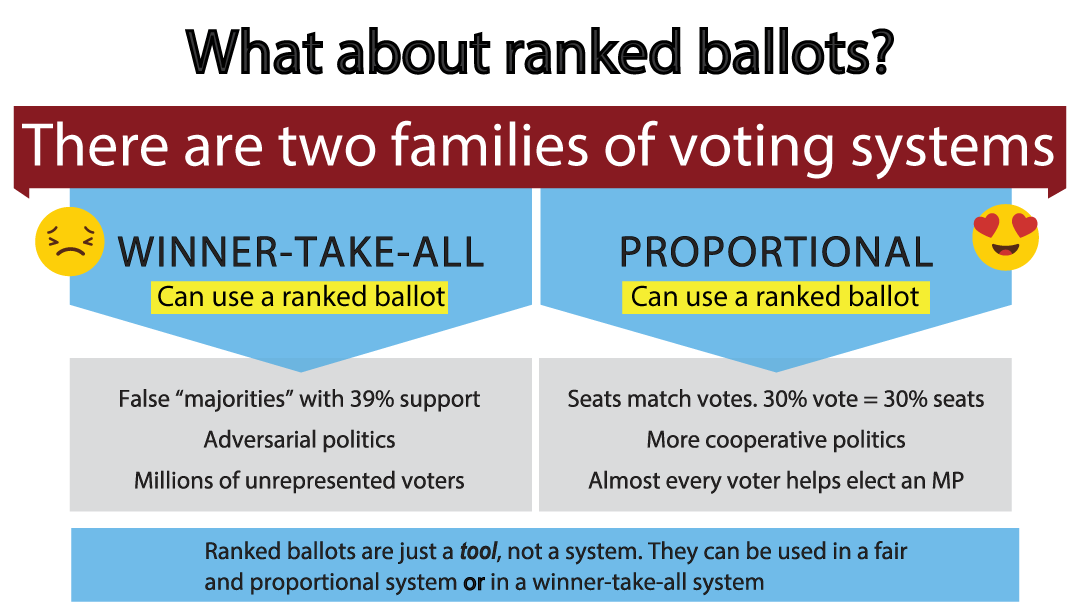 Trudeau claims today that moving to Alternative Vote would “reduce divisiveness”. Perhaps he ought to check in with the experts from Australia, one of only two countries that use Alternative Vote on a national level.

Here’s how they describe the effect the Alternative Vote on politics:

“Alternative Vote is unique amongst ordinal voting systems in that it supports and perhaps encourages hostility between the largest parties thus contributing to Australia‘s harsh political culture.”

After the election, Alternative Vote produces a Parliament characterized by grueling partisanship. According to a report by Dr. Marc Rodrigues, Question Period in Australia amounts to a war of scripted talking points:

“Question Time in the House of Representatives is often criticized for declining parliamentary standards and accountability. Oppositions are inclined to use partisan attacks disguised as questions to embarrass the government to which Ministers respond with lengthy answers of marginal relevance. Ministers often use Question Time to attack the opposition with pre-prepared statements in response to ‘Dorothy Dix’ questions from their own side. Much of the theatre of Question Time is characterized by disorder contrived to make the evening news.”

In 2015, the Liberal Party explicitly indicated they were open to proportional representation.

Trudeau’s comments demonstrate why politicians can’t be trusted on electoral reform: they can’t overcome the inherent conflict of interest they are in. Ethically, they need to step aside and let citizens lead.

If Trudeau is really for evidence-based policy, he needs to put the question to an independent, non-partisan National Citizens’ Assembly on Electoral Reform.

According to a national poll by Leger in 2020, 80% of Canadians – voters for all parties – support a National Citizens’ Assembly on Electoral Reform. 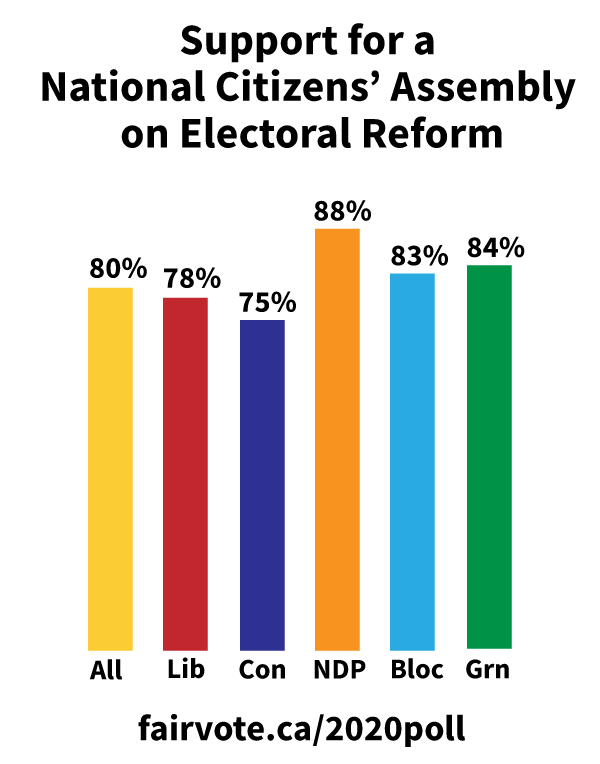 On June 22, 2021, three parties (Liberals, NDP and Bloc) voted for NDP Democratic Reform Critic Daniel Blaikie’s motion at the Procedure and House Affairs (PROC) committee to study a National Citizens’ Assembly on Electoral Reform. The Green Party also supports this, but did not have a seat on this committee.

The vote passed 7- 4, with only the Conservatives voting against it. The Conservatives did not object to a National Citizens’ Assembly on Electoral Reform – they objected to an amendment from the Liberals to also study the value of citizens’ assemblies in general.

It’s time to take this out of the hands of self-interested politicians, and put it to a process everyone can trust.

Another minority Parliament is the perfect time to do this.