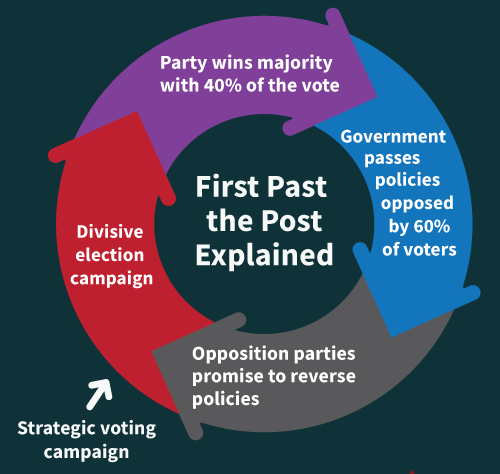 In just one year – June 2, 2022 – Ontario voters will head back to the polls to determine if Doug Ford’s government gets another “mandate”.

Thanks to our archaic, winner-take-all voting system, this is how democracy “works” in Ontario. The last time Ontario had a majority government elected by an actual majority of voters was in 1937!

The past three years have been a relentless onslaught of “policy lurch”: the extreme policy swings and policy reversals when a false majority government of one stripe replaces another.

Policy lurch wastes every voter’s time and money. Policy lurch stalls progress on important long-term issues while we swing back and forth, assembling and dismantling programs. It causes constant instability for business. And it can turn people’s lives upside down.

Policy lurch is one of the most destructive outcomes of our winner-take-all voting system.

Only proportional representation can stop policy lurch, and put us on the path to governance that puts the public interest first.

Policy lurch has been happening for decades, but the list of costly examples in Ontario over the past three years alone is staggering:

In many cases, all three opposition parties will soon be loudly promising to reverse the reversals!

In fact, these kinds of “we’ll bring back” and “we’ll undo” election promises can make up a large part of a party’s platform―taking up the valuable time of a new government to achieve.

Only proportional representation can stop the worst of this wasteful and destructive cycle before it gets started.

Proportional representation ensures that every policy―no matter which government is in power―has majority support in the first place!

This means policies are developed through real collaboration between multiple parties, with different perspectives.

That’s more stability for everyone – citizens and businesses – when policies are built to last.

Whether it’s economic prosperity, environment, or health and well being, when we look at the long-term picture, the research is clear: Countries with proportional representation perform better for everyone. Cooperation works!

And cooperation is exactly what Ontario citizens want. Last September, a poll by Leger showed that an overwhelming number of Ontarians support:

It’s time to put electoral reform back on the agenda in Ontario! 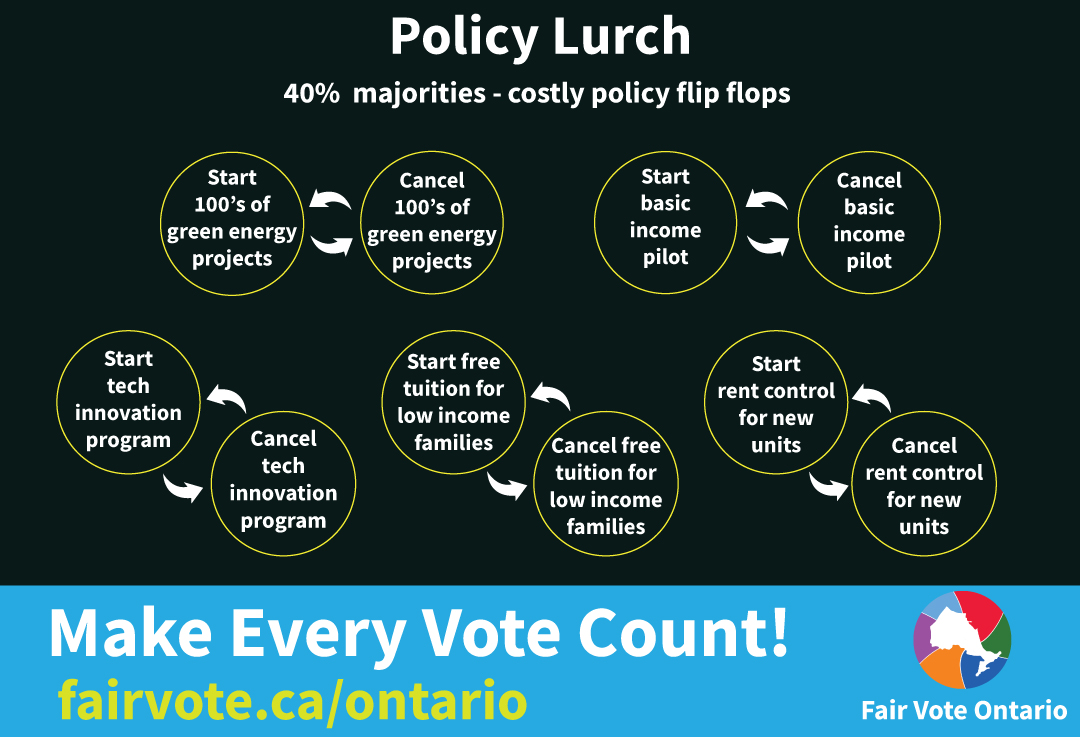