What drives the timing of Canadians elections? Partisan self-interest, pure and simple 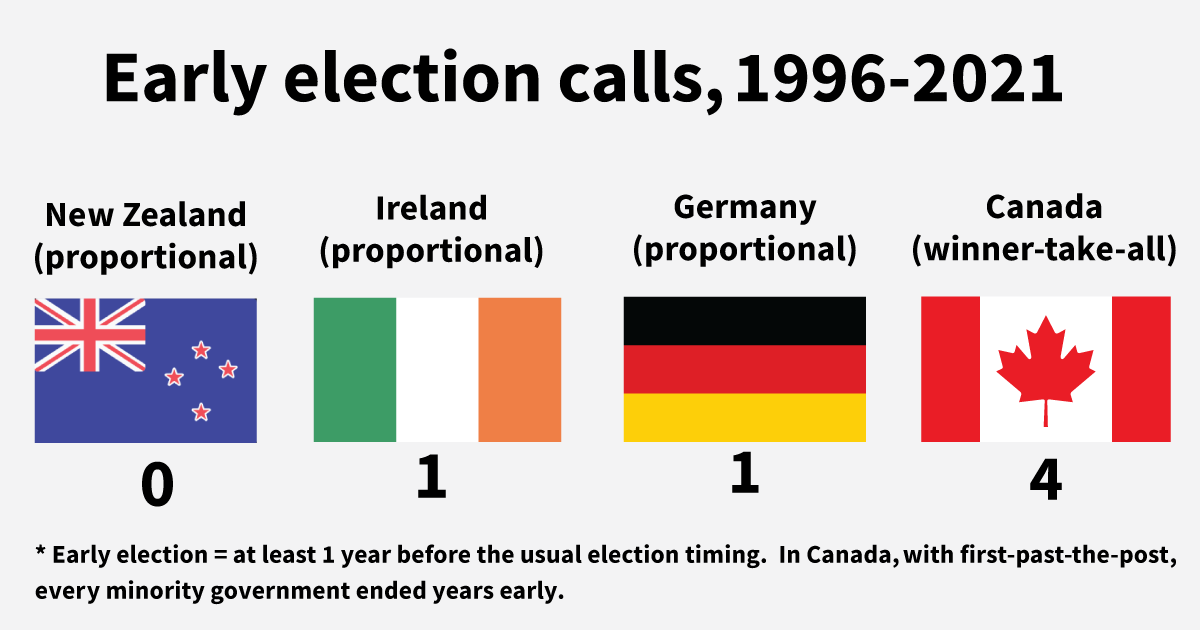 On May 25, Parliamentarians voted almost unanimously for a motion discouraging any party from triggering an election in the middle of a pandemic. Whether motivated by pensions or by the public interest, the move was in line with the views of most Canadians.

But we should be asking ourselves this: Why is an early election, less than two years after the last one, even being discussed?

“Why are we talking about an election when the Prime Minister has the opportunity to work with members of the opposition?”

As Andrew Coyne explains, it’s good, old partisan self-interest. Good polling numbers present a mighty tempting chance to trade in a minority government for a majority. The solution for this unquenchable thirst for power is voting system reform:

“Why not remove the major source of the instability Canadians associate with multi-party governments: the constant threat of a snap election?

That threat is not a reality in countries with systems of proportional representation. Why? Again, because of the incentives in each. A winner-take-all system like first past the post, in which a two per cent swing in the vote can mean a gain or loss of 60 seats, encourages a gambling mind-set to match. Is your party up a couple of ticks in the polls? Force an election and try your luck. By contrast, in systems without such leverage — where a two per cent swing means just two per cent more seats — there is no such payoff, and no game worth playing.”

It doesn’t need to be this way. As decades of international research has shown, stable, cooperative governments deliver better results.

Even with the instability and cut-throat nature of winner-take-all politics, minority governments have brought Canadians:

The current minority government has had tangible benefits for Canadians. It’s hard to imagine that the pandemic relief relied upon by so many Canadians would have been as comprehensive (though still flawed) as it was without the input of the opposition parties.

The first national childcare program (notably, developed with the buy-in of the provinces), the Kelowna Accord (a real step to reconciliation with Indigenous peoples) and an ambitious plan to meet Canada’s Kyoto emission commitments are the most tragic examples of abandoned plans that could have changed the course of our history and changed the lives of many Canadians for the better. Partisan power-seeking — early elections called by minority governments — cut them off at the pass. A generation later, policies to tackle these same issues proceed at a snail’s pace.

When partisans force an early election, months or years of good work is left at the whim of the next government to resurrect—or abandon entirely.

A National Citizens’ Assembly on Electoral Reform, supported by 80% of Canadians across party lines, could be the next victim of the quest for unfettered power. The motion is currently stuck in limbo as the committee enters its fourth month of a filibuster.

Whether by time-wasting, adversarial games or an unnecessary election, this innovative idea may be axed by the very destructive partisan dynamics it sets out to fix.

If the temptation to capitalize on good polling numbers by calling an early, unnecessary election can be resisted, we can break the cycle. Will Trudeau’s government put the interests of Canadians first? And the MPs can get their pensions, too.