American polarization should be triggering alarms in Canada 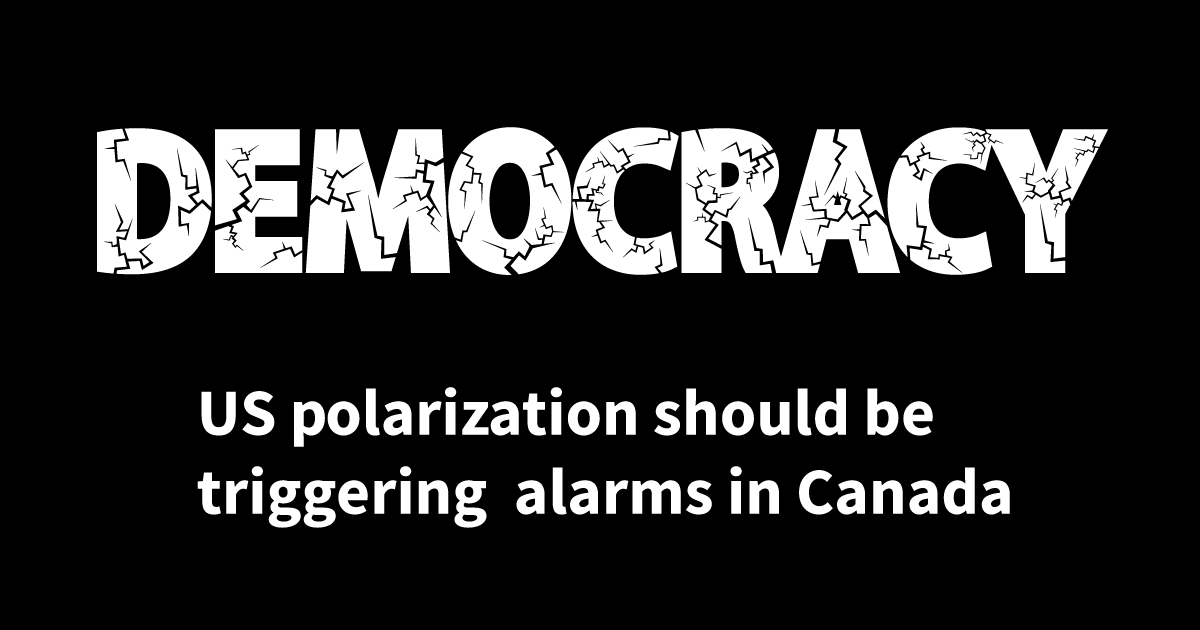 “An ounce of prevention is worth a pound of cure” is old wisdom that few would question.

Canadians watched in with alarm―or downright horror―as the cancer of divisiveness and polarization spread throughout US democracy in recent years. They should have been asking what is being done to prevent it here at home.

If we think irrational, dangerous polarization can’t happen here in Canada, then we haven’t been paying attention.

It’s hard to overstate the problem. In the United States, people are screaming, but they can no longer hear each other. Partisan polarization―the division between “us” and “them”―is stark.

Only 10% of Republican voters think the effort to contain the pandemic is going badly.

A majority of Republican voters blame Joe Biden for the attempted coup on Capitol Hill. 45% support those who stormed the Capitol.

It defies evidence, logic and reason. And it won’t be cured by the inauguration of a new president. It is unclear to what degree it can be tempered at all. Regardless of Joe Biden’s best efforts, the soil has been tilled for the next Donald Trump.

Rebuilding American unity will be a huge challenge for the incoming administration, but the damage has already spread north of the 49th parallel.

A 2019 McGill University study found that political polarization is deepening in Canada.

One in five Canadians think the US election was rigged against Trump.

EKOS reports that the chasm between authoritarian-minded Canadians and the others is becoming more entrenched.

Over many years, even preceding Trump, attitudes towards immigration in Canada have become massively divided along partisan lines.

When climate change―with its inevitable refugees―hits Canada hard, those divisions could be a powder keg waiting to explode.

It’s time to face it: the difference between ourselves and our US neighbours is one of degree.

This isn’t a new problem. In 1979, the national Task Force on Canadian Unity struck by Pierre Trudeau issued a stark warning to the nation. The political divisiveness in Canada’s democratic system was “an advance signal of eventual disintegration”. A democratic system that routinely shuts out, alienates and pits Canadians in different regions of the country against each other must be corrected―urgently.

Instead, partisan polarization and other divisions in Canadian society have only intensified.

What are Canadian political leaders doing to prevent this progression?

Last week’s well-meaning op-ed in the National Post by Liberal MP Anthony Housefather and Conservative MP Scott Achison contained a familiar admonishment to our Members of Parliament: Think about what happened in the US. Be nicer to each other.

If only that kind of timeless, toothless advice were enough to permanently flatten this curve!

The messaging gurus in the Liberal Party will surely have their own solution at the ready: vote for the centrist Liberal Party―in perpetuity.

In their minds, the fact that only 33% of voters did just that in the last federal election―shutting prairie voices out of government in the process, again―was an accidental blip. Surely it can be solved by appointing more “special advisors”?

What would proactive prevention―to reverse our gradual decline into US-style “democracy”—really look like?

The OECD, of which Canada has been a long-time member, has an answer: citizens’ assemblies. A recently-released report outlines the evidence from 279 such deliberative processes. The results are inspiring.

Citizens’ assemblies break down barriers and divisions, strip away echo chambers and humanize “the other”. Bringing people together, they find practical solutions to tough problems. Solutions in the public interest―minus the politics.

As Graham Allen, a former Labour MP and leading advocate for a UK Citizens’ Convention on Democracy notes, our elected representatives are “hamstrung by whips, tribal party loyalties, electoral short termism, lobbying and campaigning money to the extent that they are often unable to make progress on issues. I know since I was one for 30 years.”

After 100 years of empty promises from our federal politicians on electoral reform, we need a process that all Canadians can trust: A National Citizens’ Assembly. Such a well-formed body would be just the ounce of prevention we need to protect and renew our fragile democracy.

The catch-22? We need our political leaders to commission it.

In an era when the warning lights are flashing more alarmingly than ever, Canadians are asking: Will our leaders step up? 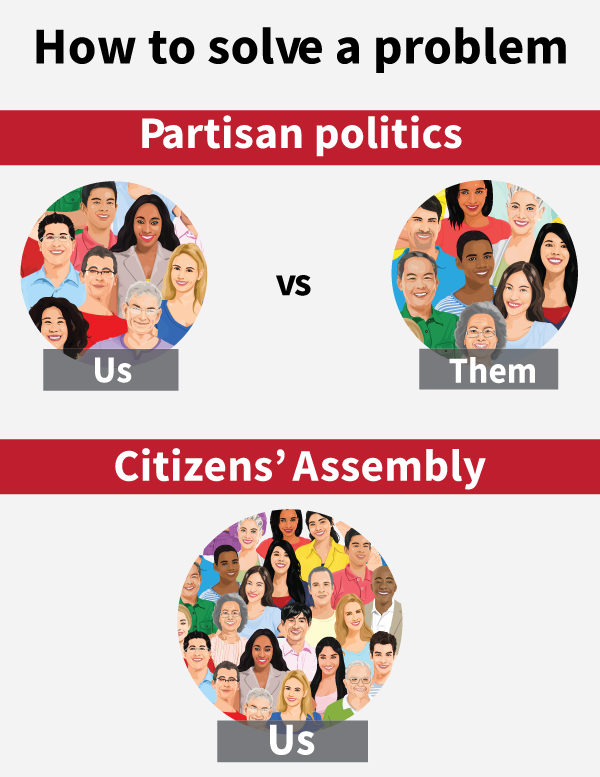