Crises are a time to step up cooperation―because it works. 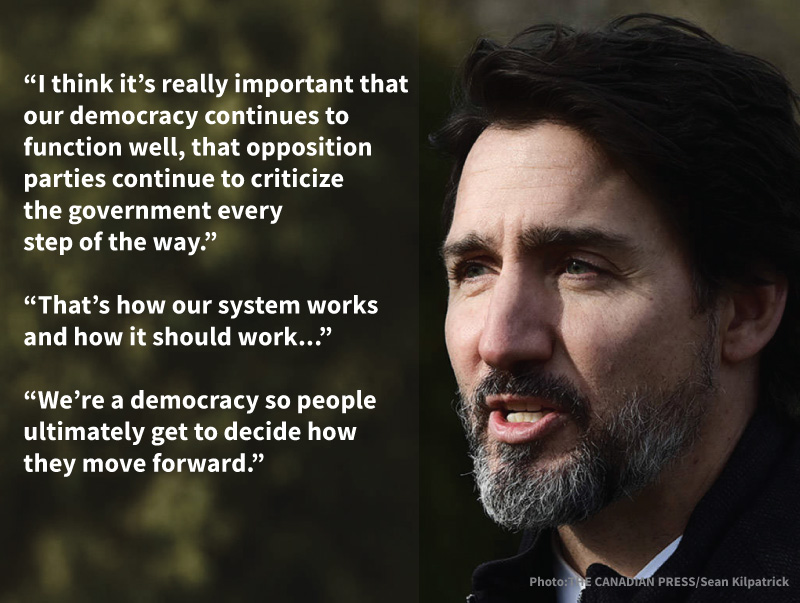 Crises are a time to step up cooperation―because it works.

Trudeau’s latest dispatch from the doorstep was an impassioned plea for people to stay home and save lives.

It was also a revealing glimpse into the dysfunctional norms of winner-take-all politics.

According to Trudeau, cooperation between parties should be reserved for rare times “when it matters”―such as passing key government bills for financial relief. Adversarial tactics, with opposition parties criticizing the government’s every move, is how democracy is supposed to work.

And if the public isn’t happy with the outcome of this approach? Well, there’s always another election.

It was a message Trudeau repeated again this week, when challenged about the lack of an enforcement mechanism for the latest (undefined) climate targets. Canada hasn’t hit a climate target since 1992. Under the latest plan, if we blow past our targets again, the accountability mechanism will be… “the voters.”

It was the same message Trudeau gave to Daughters of the Vote in 2017 when questioned about Canadians disillusioned by the broken promise on electoral reform: “That’s what elections are for.”

If we don’t like what the government did (or didn’t do), just kick the bums out.

How well do adversarial politics work?

By now, the answer is obvious to almost everyone: Not well enough.

A whopping 97% of Canadians told pollsters early this year that they want a system where parties work together more in the public interest. Not just once in a while, only when they are absolutely forced to—but all the time.

On COVID-19, New Zealand’s all-party response was a model for the world.

The recent climate law passed in Denmark is a revealing contrast to yesterday’s announcement in Canada.

In Denmark, parties representing 95% of voters worked together to draft the most ambitious climate legislation in the world.

The built-in enforcement mechanism? Every annual report must show their progress and produce a concrete, believable plan to meet the next target. If  the plan isn’t airtight, the government can face a confidence vote.

In a system where no party can ever win a majority with 39% of the vote, a confidence vote really means something.

In Canada, by contrast, if the first report in 2032 shows another massive failure… “that’s what elections are for.”

How exactly are climate-minded voters―or voters unhappy with inadequate progress on any long-term, important issue―supposed to hold the government accountable in a winner-take-all system?

As brand-new research from UBC revealed:

Millions of Canadian voters are voting for parties they don’t really want because they think it’s almost impossible for their sincere choice to win in their riding.

Millions others are not voting at all because they know their votes won’t count.

In the last federal election, over 9 million voters—the majority—cast votes that made no difference to the outcome. How did those voters hold the government accountable?

Faced with impossible choices at election time, our winner-take-all system will continue to elect governments that Canadians know are failing them.

As Lloyd Axworthy, Chair of the World Refugee Council and former Foreign Affairs Minister wrote in the Globe and Mail a few days ago, it’s time to get back to work on electoral reform!

“We have a secure electoral system, one amended in 2017 to counter cyber interference. But since then, the promise to reform the anachronistic first-past-the-post election system has been dropped and the Ministry of Democratic Institutions abolished―at a time when an Elections Canada study shows an increasing drop in young voters, and when the Black Lives Matter movement has laid bare the disparities endured by Black and Indigenous people in Canada.

It’s time to overhaul our election system to open pathways for broader participation. An initiative to provide civic education would be a major boost to promote engagement. A plan to reform our own parliamentary democracy would be a good model to share with the world.”

Other trusted and notable Canadians, like our former Parliamentary Budget Officer Kevin Page, support the call to action..

Jagmeet Singh has set the ball in motion, with a public letter to Justin Trudeau, calling for the Liberals to work with the NDP to set up a National Citizens’ Assembly on Electoral Reform. Green Party Leader Annamie Paul is already on board.

“We’re going to work every day to ensure the world we leave for our kids is a better world than the one we inherited from our parents.”

As we build back better in Canada, we can’t afford to leave democracy behind.