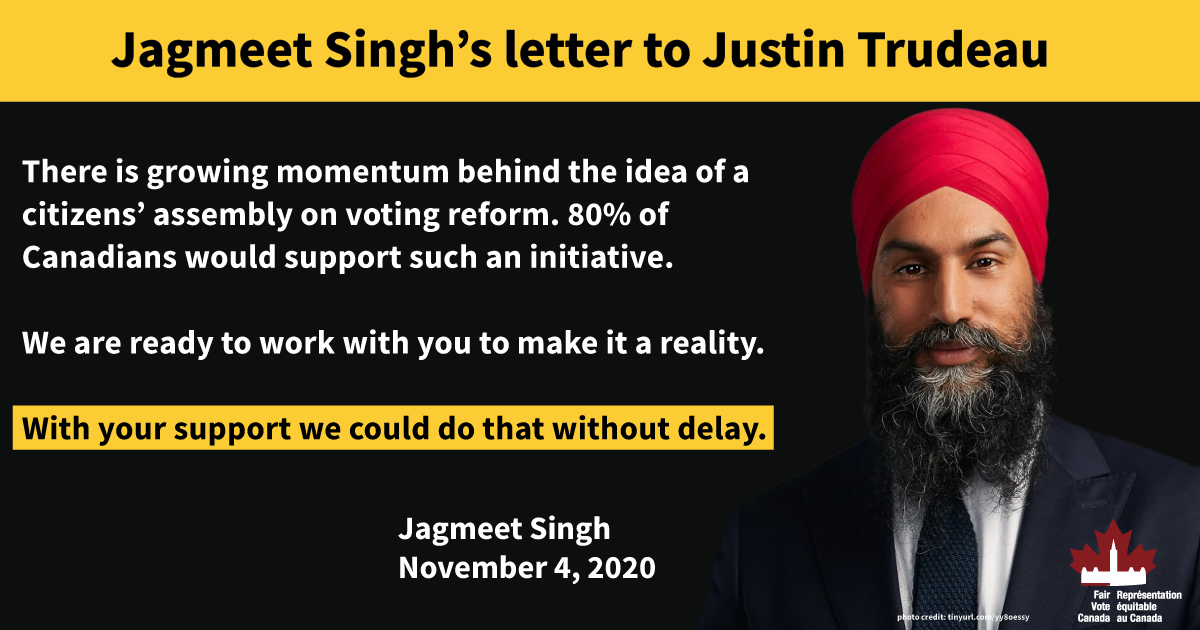 NDP leader Jagmeet Singh has proposed a way for the Liberals to pick up where they left off on electoral reform in a letter to Prime Minister Justin Trudeau.

In the November 4 letter to Trudeau (en français), Singh notes that the parting recommendation of the Liberals on the federal electoral reform committee in 2016 was that the Government undertake a period of comprehensive and effective citizen engagement after the 2019 election.

He proposes working together with the Liberals to commission a National Citizens’ Assembly on Electoral Reform that would fit this recommendation.

Singh notes how cooperatively Parliament has worked to deliver support for Canadians. He draws attention to the results of a September 2020 Leger poll, which found  that 97% want to see parties working together more in the public interest.

Citing the same poll, he finds support for electoral reform, noting that 93% of respondents think laws passed in Parliament should have the support of MPs representing at least 50% of voters — something that would only happen under a proportional voting system.

Singh invites the government to collaborate with the NDP to “find a way forward toward the kind of reform we know Canadians would like to see in a spirit of cooperation and openness.” He sees “growing momentum behind the idea of a citizens’ assembly to craft an effective way forward on voting reform,” noting that 80% of Canadians would support such an initiative.” He says the NDP is “ready to work with you to make it a reality,” adding that “New Democrats believe we can, and should, take that next step. With your support we could do that without delay.”

While calling for a National Citizens’ Assembly on Electoral Reform, Singh evokes “the perils of counting on the people who have a vested interest in the current system to develop proposals to change it.”

As an OECD report released this summer titled Innovative Citizen Participation and New Democratic Institutions: Catching the Deliberative Wave reveals, citizens’ processes are being used around the world to tackle tough issues in an evidence-based way. Governments commissioning assemblies show political leadership by inviting citizens to play a meaningful role in democracy. Managed by an independent and impartial third party, a National Citizens’ Assembly on Electoral Reform would give Canadians what they clearly want: progress on electoral reform and a process they can trust. It would do so in a way that does not impose a burden on MPs.