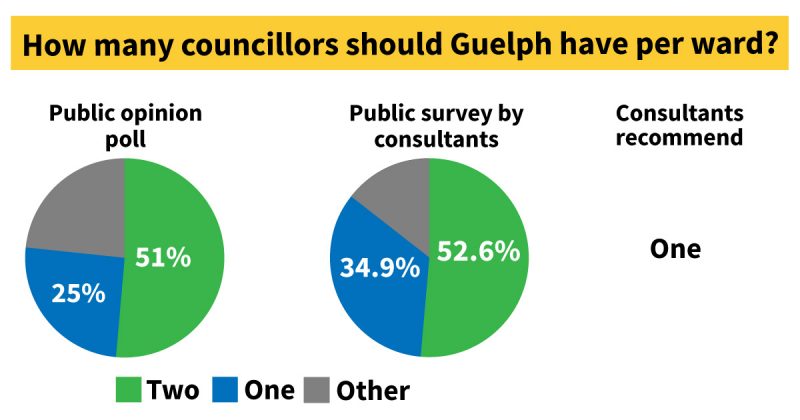 A new poll by Strategic Directions, commissioned by Democracy Guelph and Fair Vote Guelph shows that:

These results are consistent with the results of the consultation done by Watson and Associates Economists for Guelph City Council which found that:

“The results of multiple surveys are telling us that there is currently no mandate for adoption of the recommendation to move to 8 single member wards.” says Kevin Bowman of Democracy Guelph. “That said we have an opportunity to continue this discussion in a more deliberative way. Guelph could and should make positive changes to Council to make it more representative and remove barriers to public input and participation. We need to ensure the people of Guelph have an opportunity to understand the options available and we need popular support before implementing any proposed changes.”

“Guelph City Council needs to respect what citizens are telling them,” says Ken MacKay of Fair Vote Canada Guelph. “Guelph residents like having two local members representing them. Dual member wards have been working well for voters in Guelph for 30 years. Guelph residents are clearly saying they want to keep them.”

Results of the poll:

Did you vote in the last municipal election?
Yes, press 1
No, press 2
If you don’t recall, press 3.