On October 5, 2020, NDP Democratic Reform Critic Peggy Sattler spoke in the Ontario legislature about why strengthening with democracy with proportional representation matters. (8:00 in the video)

“So, Speaker, in my capacity as critic for democratic reform, I wanted to point out some of the advantages of moving away from first past the post and looking at a system of proportional representation as the most effective way to ensure that the problems associated with COVID-19, the risks to the people that we represent, can be dealt with in a much more collaborative way, a way that involves the ideas of all members who are elected to represent the voices of our constituents.

“There’s research that’s been done: Countries that have systems of proportional representation have been much more effective in their response to COVID-19. They have experienced fewer deaths, fewer hospitalizations, fewer people on ventilators. All of this is well-documented in the research. That is because those countries operate in a system of negotiation, of compromise, of hearing from different sides of the table so that they can make good decisions that actually respond to the priorities and the needs of all of the people of this province.

“I also just do want to give a shout-out to Fair Vote Canada that just recently put out a paper called Building a Better Democracy. I encourage all members in this chamber to take a look at that paper and review the benefits of proportional representation to build a better democracy. Because, Speaker, democracy is more than about elections. Democracy is about engagement. It’s about citizen participation. It’s about feeling that the government is responding to needs that have been identified by the people who are represented.

“Leger just recently did a poll. They asked Canadians questions about democracy: What do they care about in democracy? Some 97% of Canadians who responded to that poll said they want a system that encourages parties to work together more in the public interest. They want a system that encourages elected members to work on longer-term solutions to problems, rather than quick fixes.” 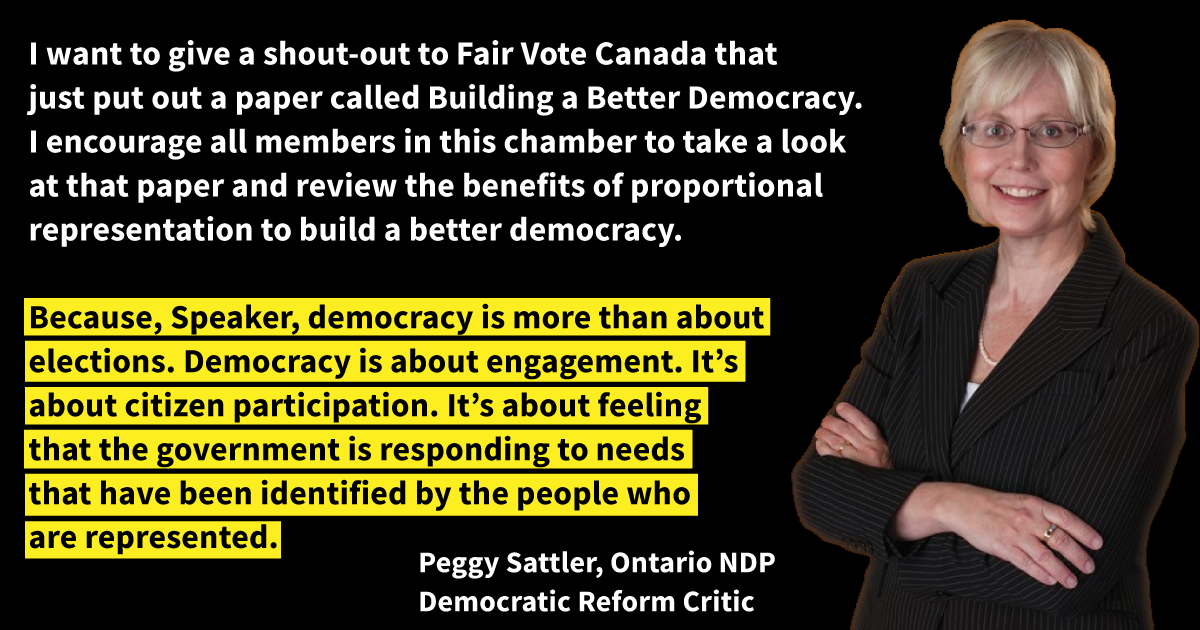