First-past-the-post cheats voters in every province

Canada’s new House of Commons makes the country look far more divided than it really is.

“I do not see why we should maintain a voting system that makes our major parties appear less national and our regions more politically opposed than they really are” wrote former Liberal leader Stephane Dion in 2012. “I no longer want a voting system that gives the impression that certain parties have given up on Quebec, or on the West. On the contrary, the whole spectrum of parties, from Greens to Conservatives, must embrace all the regions of Canada. In each region, they must be able to obtain seats proportionate to their actual support. This is the main reason why I recommend replacing our voting system.”

“Mr. Dion was obviously right “says Fair Vote Canada President Real Lavergne. “Distortions of the popular will of the sort that come about under our first-past-the-post voting system are unacceptable in a democracy worth its salt.”

The Liberals have no mandate to govern alone, with only 33% of the votes. A potential Liberal-NDP coalition would still have a majority of MPs under either system, but it would have been representative of all provinces had they been elected under pro rep. Not only would the PMO have to get agreement from two parties, it would face full representation from 10 provinces.

The voting system has robbed more than half of the NDP voters of fair representation. They cast 16% of the votes, yet elected only 7% of the MPs.

Still worse, Green Party voters cast 6% of the votes but elected only three MPs, when fair representation would have been 22 MPs. Atlantic Provinces voters are more diverse than they appear from the results. Atlantic Canada Conservative voters deserved to elect nine MPs rather than only four. The 32 MPs from those four provinces should have included five New Democrats rather than only one, and four Green MPs rather than one.

Ontario voters deserved to elect 24 New Democrats not just 13, and 11 Green MPs rather than none. 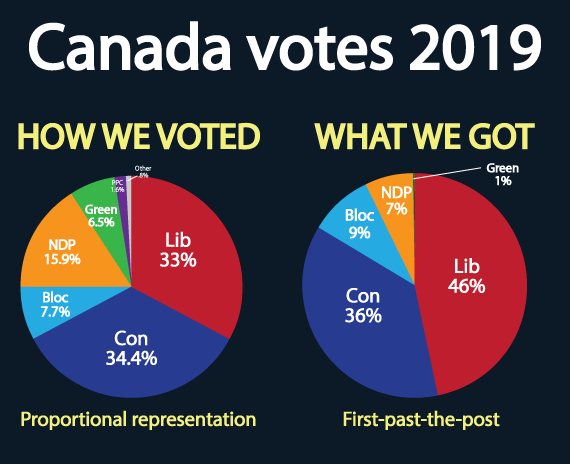